Wick-rotated quantum computers e.g. to be realized with Ising-like systems?

Quantum mechanics is equivalent with Feynman path ensemble, which after Wick rotation becomes Boltzmann path ensemble - and e.g. Ising model is a basic condensed matter model, which is assumed to use Boltzmann ensemble of e.g. sequences of spins - in spatial direction instead of temporal in QM.

Such spatial realization of Wick-rotated quantum mechanics seems to allow to violate Bell-like inequalities, so a natural next question is if we could build Wick-rotated quantum computers in Ising-like systems? For example to be "printed" on a surface, solving encoded problem if assuming Boltzmann ensemble among sequences?

Notice that Wick-rotated QC is different from adiabatic QC - the latter minimizes Hamiltonian, having huge problem with usually exponentially growing number of local minima. The former is closer to Shor - exploits path ensemble, should not have this optimization problem (?)

While quantum computers use unitary gates: with eigenspectrum in complex unitary circle, such Wick-rotated gates would have real eigenspectrum.

Hadamard gate $H$ is used to get initial superposition in quantum computers, below mixing gate $X$ can be used to get (Boltzmann) ensemble in Wick-rotated computers:

In theory, controlled e.g. NOT, X should be also possible, the question is what could be realized e.g. in Ising-like system?

While in quantum computers we can only fix initial amplitude in the past, a big advantage of such spatial realization is that we could fix amplitudes in both directions (left and right), what might allow e.g. to solve 3-SAT (NP-complete, end of this arxiv).

In quantum subroutine of Shor's algorithm below, we prepare ensemble (past direction) of all inputs, calculate classical function and measure its value (future direction) - restricting the initial ensemble to inputs giving the same value of classical function - period of such restricted ensemble (found with QFT) gives a hint for the factorization problem.

Analogously for Boltzmann path ensemble for 3-SAT below, but in spatial realization we can also fix values from second direction (right) - restriction (in splits) becomes to inputs satisfying all the alternatives: 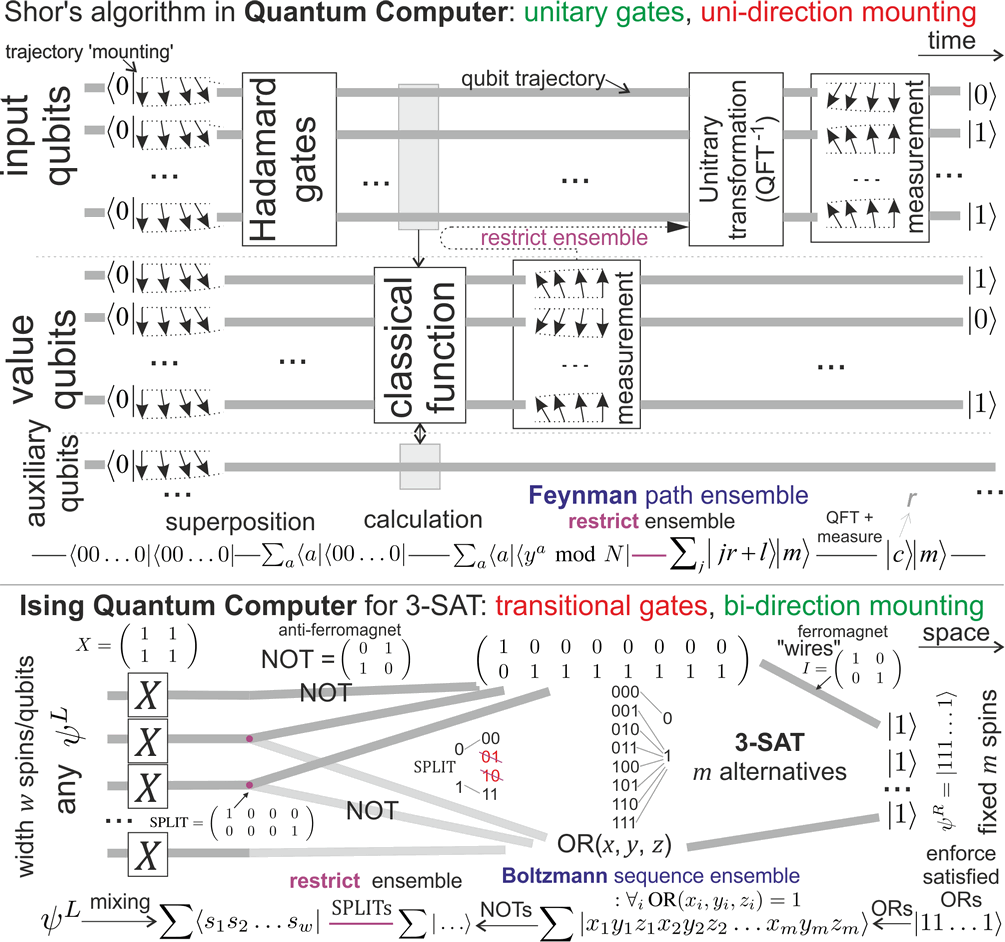 Which Wick-rotated gates could be realized in Ising-like systems?

Assuming we could build e.g. above 3-SAT setting, would it work? In other words - is Boltzmann sequence ensemble a perfect assumption, or only an approximation?

Is there a literature for Wick-rotated quantum computers, gates?

I'm not exactly sure what you're asking, but note that if you just Wick rotate any old Hamiltonian, you're likely to end up with a path integral with negative Boltzmann weights, which won't actually correspond to any (local) physical statistical system, eg. Ising.

The Hamiltonians that do Wick rotate to a path integral with positive Boltzmann weights are called "stoquastic" and finding their ground state energy has its own complexity class, called StoqMA (contained somewhere in QMA and containing MA). This paper describes the complexity in some detail, but I am not expert enough to summarize it.

I found this nice diagram as Fig. 1 in this paper ("On the complexity of stoquastic Hamiltonians" by Ian Kivlichan... I couldn't find an arxiv link). 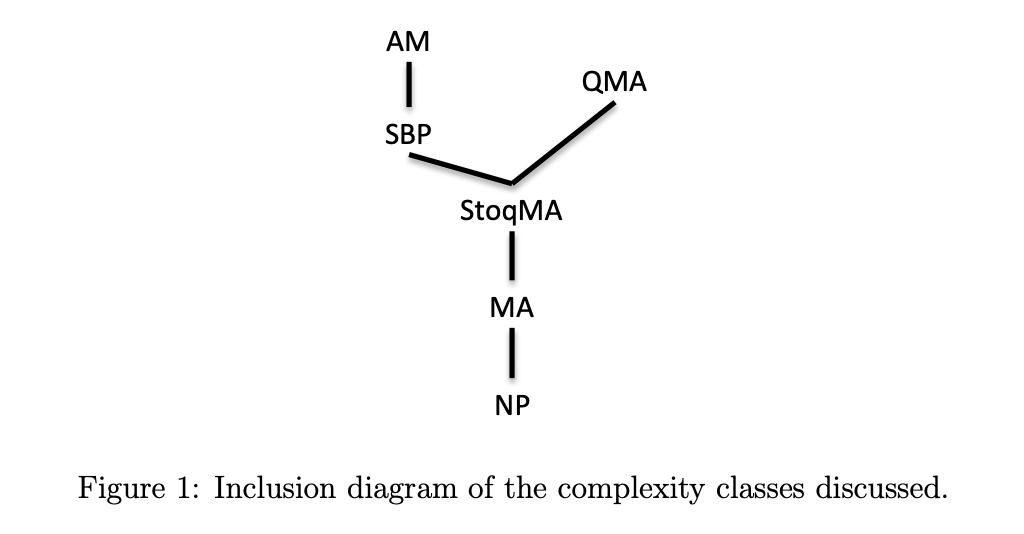 Not the answer you're looking for? Browse other questions tagged quantum-mechanics statistical-mechanics quantum-computer ising-model wick-rotation or ask your own question.