Why is there a "blue hour" after the "golden hour"?

There's a great story about why the sky is blue during the day, and turns golden during sunsets:

However, it seems this can't be the full story, because photographers know that after sunset, there is a so-called blue hour where the color of the sky becomes a deep blue again. Why would the color go from blue to golden to blue again?

Wikipedia states very strongly that explanations of this in terms of Rayleigh scattering are wrong, and that the real explanation is the absorption of blue light by ozone. But it doesn't explain why that would create the effect. If the blue light is not reemitted, then this just amounts to having less blue light, so it can't explain why the blue hour is more blue. And if the blue light is reemitted, then the effect of ozone should qualitatively be very similar to the effect of Rayleigh scattering, since it's just another scattering route that favors blue light, leading us back to the original puzzle.

What's the right explanation for the blue hour?

Wikipedia states very strongly that explanations of this in terms of Rayleigh scattering are wrong, and that the real explanation is the absorption of blue light by ozone.

Ozone doesn't absorb blue light (much): on the contrary, it absorbs red light much more, thus making the sky look blue. See in particular my answer for the question at Chemistry.SE: What exact color does ozone gas have?. Here's spectral cross section of ozone absorption in the visible(+NIR) range — the Chappuis band: 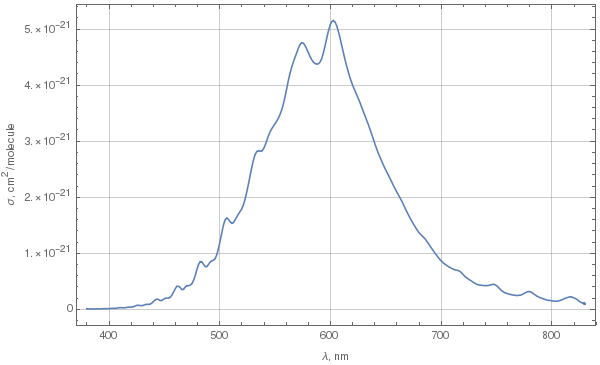 Could you explain why the effect of ozone is more important after sunset? Why doesn't this change the story during sunset, or during the day?

During the day sunlight passes much smaller distances through the atmosphere, thus is absorbed less. For the same reason it's reddened less by Rayleigh scattering, leaving more blue light to make the sky blue. Thus ozone has much smaller effect on daytime sky.

During sunset much of the sunlight passes through the troposphere, getting redder, while getting scattered into the observer more than from the stratosphere where most of the ozone layer is located (due to higher concentration of air molecules). So the ozone absorption effect is also less pronounced.

And at twilight the Earth's shadow prevents light from passing through troposphere, making the only light visible scattered from the stratosphere and above, and this light in large part gets there through the ozone layer, traversing it through the long dimension.

I have actually tested this ozone explanation of blue hour, using the Precomputed Atmospheric Scattering code to render two versions of the same scene: one for atmosphere with an ozone layer and another without any ozone. Here are the renderings of the Belt of Venus (ignore the white sphere in the center, it's just an irrelevant part of the demo scene): 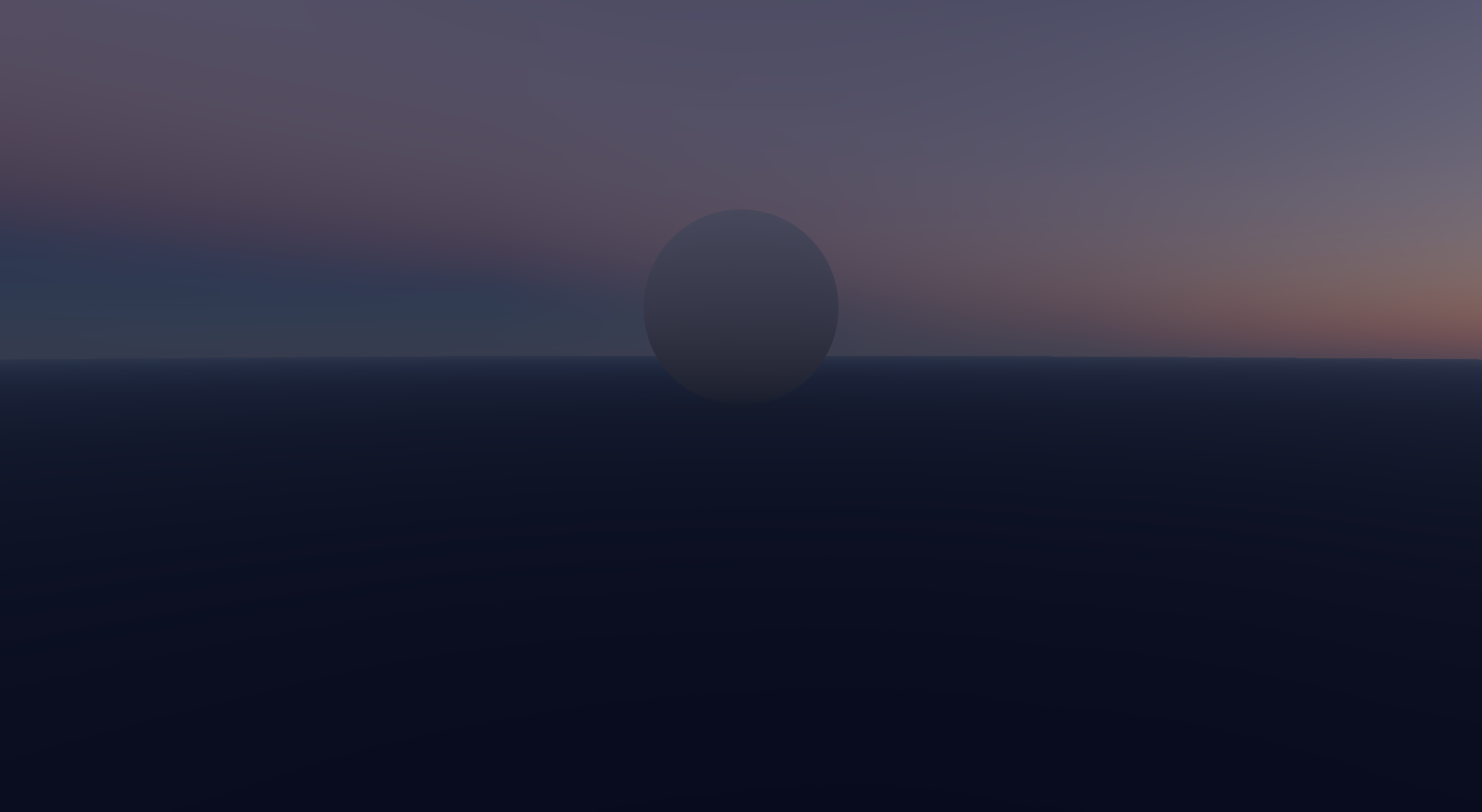 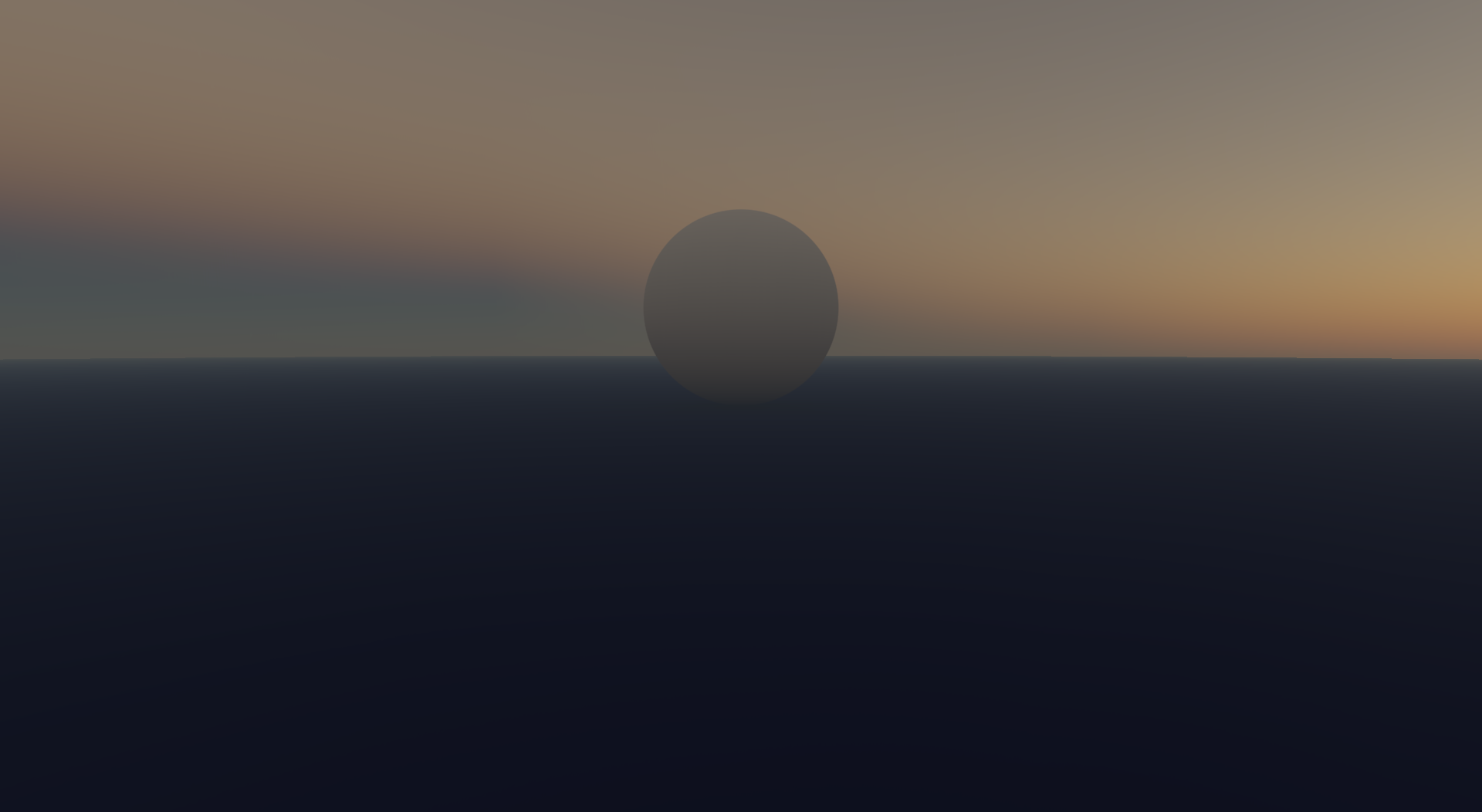 The Chappuis absorption bands occur at wavelengths between 400 and 650 nm. Within this range are two absorption maxima of similar height at 575 and 603 nm wavelengths

As seen here in the optical wavelengths , most of the visible light on the left of 500nm is absorbed, due to the large absorption lines leaving dominant the blue sector.

In ancient times in the middle east , people had variable length of days, and they counted the 12 hours from the time between the lines separating the golden/rose in the sky morning and evening ( mostly desert climate). I think the Muslim religion still does that. Actually it is the shadow of the earth on the atmosphere where the diffused light survives for a while, that is why it can be a line, if the weather is clear.

The reason is the same as in rainbow; different colours (wavelenghts)bends differently (sorry my language).

This Blue hour is the sunlight which arrives below the horizon. The reason why other light doesn't is on their wavelength. The Blue light can bend the most, and thus it can still reaches the Earth surface an hour after sunset, while green, yellow and red are already going above our heads.

This picture form german language Wikipedia on topic "Grüner Blitz" pretty much explains the issue. So there actually even is a green flash between "golden hour" (Red-orange-Yellow) and the blue hour. 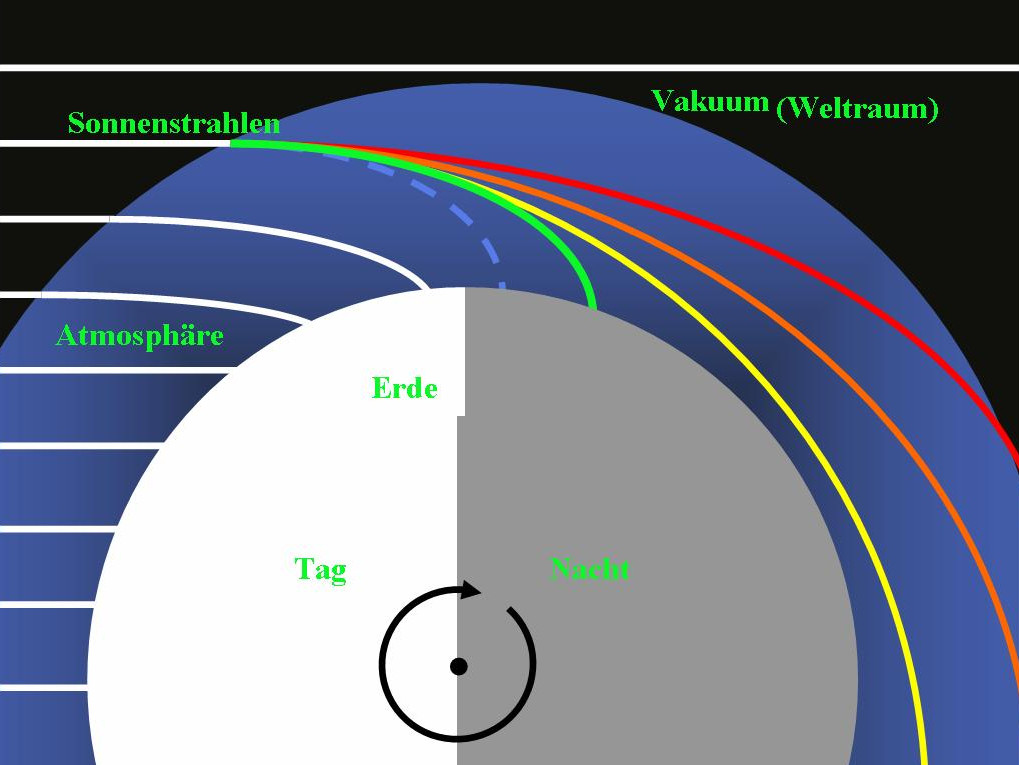 Not the answer you're looking for? Browse other questions tagged optics scattering atmospheric-science or ask your own question.

33
Why is the sky *uniformly* blue?
11
Alternate sky colors?
12
Why does sunset spread over the horizon?