Why do bar magnets exert a force on each other?

I've been trying to self-learn electromagnetism. I think I have a basic understanding of Maxwell's equations and the Lorentz force law. By combining the two, you can for example derive Coulomb's law. But I don't understand how these equations lead to two bar magnets pulling on each other, at an intuitive level.

My thinking is this. The magnetic field of a permanent magnet is ultimately created by the spin of aligned electrons. But the spin is an intrinsic property of electrons: they aren't actually spinning. If I put two bar magnets next to each, with the south pole of one aligned to the other, they attract. But there are no magnetic monopoles to "pull" on. The attractive force must come from the Lorentz force law, which means that the magnet is pulling on charges (either electrons or protons), which must be moving in an orthogonal direction to both the magnetic field and the direction of force. Does this mean that the magnetic field created by spinning electrons in one magnet are pulling on "moving"/"orbiting" electrons in another magnet?

Essentially, yes, but it is more accurate to say that total magnetic field of one magnet (due to orbital motions of electrons and also their spin) acts with net force on clusters of nuclei and electrons in the other magnet, again due to their motion and spin.

In macroscopic EM theory is that magnetic force on magnetized body element free of in-bulk electric current (basic nonconductive magnet) is given by the formula: $$ \mathbf F = -\mathbf m \cdot \nabla \mathbf B_{ext}. $$ Thus force is non-zero only if the magnetic field varies with position in space.

However, it is difficult to create a general theory behind the above formula based on the Lorentz formula only, because there is also magnetic moment associated with electron spin which as far as I know, has no obvious motion or electric current associated with it.

There are some complexities to how magnets move things around on both classical and quantum scales.

Consider the magnetic term in the Lorentz force law. It is necessarily orthogonal to the direction of motion. The magnetic field only changes direction and does no work. Why is that? Can't electromagnets lift cars against the force of gravity? The cars start out stationary and then achieve a non-zero kinetic energy. How does that happen without the magnetic force doing work? Consider induced electric fields and the application of non-uniform magnetic fields, in particular how magnetic dipoles move in them.

It might be more helpful to think of magnetism being produced by charges which have momentum, since in quantum mechanics you can't quite say an electron moves around the nucleus of an atom, but you can say the particle has momentum. In particular, angular momentum plays a significant role here and there's a known relationship between spin and magnetic dipole, the Bohr Magneton.

Your observation is that the Lorentz force describes the force on charge and current, not on electric or magnetic dipoles. The paradox is resolved by the realisation that $\nabla \times \vec P $ is a charge density and $\nabla \times \vec M$ a current density.

My thinking is this. The magnetic field of a permanent magnet is ultimately created by the spin of aligned electrons. But the spin is an intrinsic property of electrons: they aren't actually spinning.

Forget, only for a moment, about the spin, which is not spinning as you mentioned. Think about electrons as tiny magnets. The magnetic dipole is their intrinsic property (existing independently of external influences).

If I put two bar magnets next to each, with the south pole of one aligned to the (north pole of the) other, they attract. But there are no magnetic monopoles to "pull" on.

The force fields from two magnetic sources add up. In the language of line of forces, instead of closed loops through and around the one magnet

now the line of forces are going in loops through both magnetic and in between them and around them. 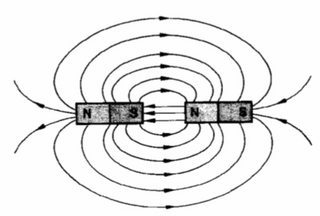 It was Faraday who introduced the line of forces:

Faraday usually discusses lines of force as chains of polarized particles in a dielectric, yet sometimes Faraday discusses them as having an existence all their own as in stretching across a vacuum.

It is a pity that the original sources are rarely used to understand today's ideas about physical processes. Thinking about the forces between two magnets as lines of tiny magnets, chained one to another, is an easy way to imagine how two magnets interact.

The attractive force must come from the Lorentz force law, which means that the magnet is pulling on charges (either electrons or protons), which must be moving in an orthogonal direction to both the magnetic field and the direction of force.

The Lorentz force describes the influence of a magnetic field on moving charges, which is not the case here, as you can easily prove. In any position the approach of two magnets can be stopped and the force between them doesn’t disappear.

Does this mean that the magnetic field created by spinning electrons in one magnet are pulling on "moving"/"orbiting" electrons in another magnet?

(Now, if you think it's important, think about the spin again.)

0
Why magnetic field lines and force are not orthogonal with magnets?
16
Can the magnetic lines of force of two or more magnets intersect each other?
2
How does a magnet cause magnetic force and its magnitude/direction?
0
Why will a 'Non-Electric Faraday Motor' which just uses permanent-magnets, not work?
0
What is a permanent magnet and how do I calculate the magnetic force exerted by a permanent magnet?
4
Why do we store a pair of bar magnets with opposite poles facing each other?
1
Is it possible to create a twisted bar magnet and will it have a twisted magnetic field?
0
Why does a moving charge experience force with a bar magent unlike getting attracted or repelling to it like two bar magnets would do?
0
Why is there no deflecting force between two bar magnets?