A uniform disk of mass $M = 8.0 \;\mathrm{kg}$ can rotate without friction on a fixed axis. A string is wrapped around its circumference and is attached to a $m = 6.0 \;\mathrm{kg}$ mass. The string does not slip. What is the tension in the cord while the mass is falling? 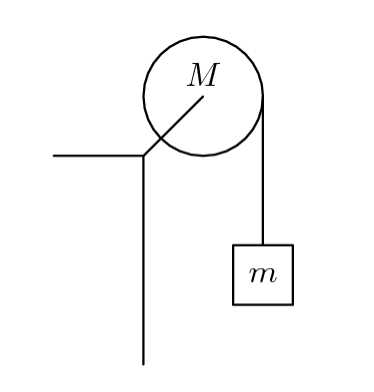 In this problem, I understand that there is a tension force within the rope that causes the disk to turn and pulls the mass hanging up. However, I am unable to judge the magnitude of force that the ropes tension puts on the disk. If we imagine the rope as a bunch of massless pieces, then we can see that each piece gets pulled by a force of $T$ ($T$= Tension Force). Thus, I am wondering if the tension force actually accumulates to a greater amount on the disk. Any ideas?

I am unable to judge the magnitude of force that the ropes tension puts on the disk.

For a "light" rope, we assume the tension is uniform throughout, and equal to the magnitude of the force pulling on each end of the rope.

If we imagine the rope as a bunch of massless pieces, then we can see that each piece gets pulled by a force of T (T= Tension Force).

It's unclear exactly what you mean by "pulled". What direction does this pulling occur? Tension in a rope doesn't have a direction.

Because each "piece" of the rope can be considered massless, there can be no net force on it. Otherwise from $F=ma$ or rearranged, $a = \frac Fm$, the acceleration would be undefined. In practice, the light rope is able to accelerate rapidly enough that it moves to eliminate any difference in forces from each side.

Without the rope joining them, we can see the block will accelerate downward at $1g$, while the pulley will remain stationary.

9
Understanding tension
6
Tension of rope. Different Answers?
3
Tension in a rope
1
Is spring force yet another force of tension?
1
Work done by tension on a system-generalisation
3
Model to understand tension varying in an hanging rope with mass
2
Tension in massless rope