Tension in a rope

In an ideal case, we assume strings and ropes to be massless and having same tension throughout. However, I was doing some questions which involved a rope with mass. The question was that if a uniform thick rope of length 5 m is resting on a horizontal smooth (assume frictionless) surface and is pulled by a force of 5N from one end, then what is the tension in the rope at the point 1 m away from the end where force is applied? (sorry for the poor image) 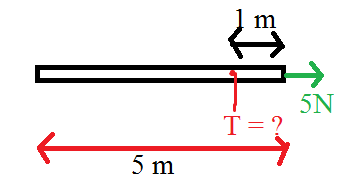 I came to the conclusion that since rope is not fixed, tension anywhere should be zero. However, when I checked the answer, it was 4 N. I failed to understand how.

Then the next part of the question was that if the rope now hangs between two fixed points which are at same level, then what would be the tension in the rope at its lowest point? 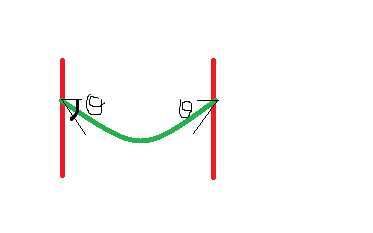 The answer has to be expressed in terms of mass of string m, acceleration due to gravity and $\theta$ where $\theta$ is the angle that tangents to the rope make with the horizontal.

I took that force acting on lowest point is mg, since it is center of mass and hence T = mg. However, according to the answer it depends upon $\theta$ as well. However, I failed to see what I was doing wrong?

I would appreciate any help in solving these questions, since I have no clue of where exactly I am wrong. I did search the Internet and a few books, but everywhere they assumed string/rope to be massless.

For the second question- COnsider the string to be made up two parts separated by a vertical line passing through the lowest point.

Now, consider the point where the string meets the wall.The string exerts a force on the wall(Normal force,tangential to the curve at that point) and in trun experiences a force in the opposite direction.

Now resolve these normal force on the string into its two components. The horizontal component is balanced by the tension force which the string experiences on the lowest point due to the pull of the other segment of the string.

Also use the fact that the vertical component balances the weight of the half-segment of the string.

As for your first question, the tension at a pint 1m away from the end is the force that pulls on the remaining string(the mass of which you can calculate by - *linear mass density times length) to move it with the common acceleration, which would be given by external force force divided by total mass.Use this.

On the first problem consider a small section of the rope ${\rm d}x$, which is accelerating by $\ddot{u}$. The section mass is ${\rm d}m = \frac{m}{\ell}{\rm d}x$ and now consider the change in tension along the rope.

The second problem is slightly more complex. I suggest you look up a derivation of the catenary equation. The shape of the rope in a span $S=5$ is defined by the general function

In the first problem, you have to realize that the rope won't just move because you want it to; inertia is still a factor. When a force is applied to the rope, it accelerates but the mass of the rope gives it inertia and means the rope has to become taut in order to start moving in full.

Since the rope is uniform, you can divide the total mass by the total length and get the mass per unit length. at this point, wherever they want you to figure out the tension in the rope, you can effectively treat the rest of the rope beyond that point as you would a rigid box of with the same mass as in that remaining segment of rope. The rope ahead of that point is similarly a rigid box with the corresponding mass. Then this problem becomes equivalent to one where 2 boxes are connected by massless string and a force is applied to one box. You then find the tension in the string.

In the second problem, you once again need to remember that the rope has mass all along its length. You also need to keep in mind that in order to offset the mass of the rope, the tension in it, which acts along the rope, at the point the rope contacts the walls needs to have a vertical component equal to $mg/2$ (2 contact points and the wall needs to support the weight). The total tension in the rope at those points then also depends on $\theta$. From here, every successive point on the rope, as you work your way towards the middle, must support the weight of the remaining rope below it as well as balance the horizontal component of tension established at the walls. So, you'd find the mass of the rope below any given point (using the mass per unit length value you calculated) and make that weight the vertical component of tension at that point. Then the $\theta$ value at that point can be found by incorporating that with the horizontal tension along the rope.

0
Tension force in a string

0
Simple rope tension problem
0
Find the tension and angle from a vertical of a rope hooked up to an object
6
Pulley-rope tension question
2
Understanding tension based on assumptions of pulley system
1
Dealing with pulleys and strings with mass
0
Tension about disk
5
Why is tension the same throughout a massless rope when the rope is curved?
2
Tension in massless rope
0
Can we resolve tension force into components for net force?