From what I understand from my notes, an e.m.f or electromotive force provided by a battery is the electrical energy per unit charge converted from other forms of energy required to drive a unit charge completely through a closed circuit. This is equivalent to the work done by the electric field.

But in a common circuit, where you have conducting wires conducting a battery and a resistor R, where C is the point before the resistor and D is the point after, as shown in the diagram below; 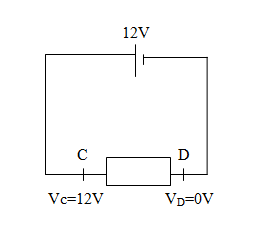 why would the electric potential at point C be equal to the emf of the battery according to its definition (work done per unit charge in bringing a unit charge from infinity to a point)?

On the contrary, it does seem intuitive because if the wires are perfectly conducting and don't have any resistance, then the electrical energy would not be used at all until the unit charge reaches the resistor from the positive terminal. After all, the unit charge would be drifting at a constant drift velocity, so there wouldn't be any change in KE. But, then that would mean there would be no potential difference between 2 points along the wire. And, since $E=-\frac{dV}{dr}$, that would mean that the magnitude of the electric field in the wire would be zero.

But, how is that possible? Don't free electrons in the conducting wire require an electric force to be exerted on them by the electric field produced by the battery in order to drift towards a net direction and thus produce a net current?

v=ir is derived in the limit where the resistive force equals the electric force, in the drude model of conductivity, the equation of motion of a single electron follows:

$$ma= eE -(m/T)v$$ where e is the charge of electron, m is the mass, and T is the "relaxation time", aka time between collisions

In the condition that The resistive forces equal the electric force, the net acceleration is zero, hence, $$0=eE-(m/T)v$$

or $$j = \sigma E$$ which is the microscopic ohms law,(if you want to derive the macroscopic version it is also easy assuming, j is constant about the area of the wire, and that E is constant throughout the wire)

it is a sort of terminal velocity of the wire. In this sense, the equation actually tells us the potential difference to MAINTAIN a constant current. where there is no resistance there is zero potential needed to maintain a current. therefore this equation gives v=0 for r=0. obviously initially there IS an electric field in the wire to "get the current going", so initially work IS being done on electrons . but once that current is going, zero potential is needed to maintain the motion of the electrons, given they move at a constant speed

the movement of these charges in e.g charged conductors, create an opposing electric field in the wire such that the net E field in a perfect conductor is zero

Of course in the real world the wires are not perfect conductors, but we can still make this all work if we assume the wires are perfect conductors. I will also be approaching this from a more macroscopic level where I will ignore the fact the the charge carriers in the circuit are actually experiencing many collisions (forces) with particles in the wires.

If we assume that wire before the resistor (the left side of the circuit on your diagram) is an equipotential surface (or line?) then the charges can access any part of the wire without any forces acting on them (i.e. no change in energy). When a charge happens to come to the resistor, though, then it will experience a force through the resistor (since the left end is at a higher potential than the right end).

But, how is that possible? Don't free electrons in the conducting wire require an electric force to be exerted on them by the electric field produced by the battery in order to drift towards a net direction and thus produce a net current?

The charges have a non-zero energy when they start at the positive terminal of the battery. With no force acting on them they are free to move towards the resistor. If you just focus on the left side of the circuit, the battery acts as a charge source and the resistor acts as a charge sink. But between these two points the charges are free to move around without the need of an electric force. Any charge that makes it to the resistor will experience a force (and a loss of potential energy) to the other side of the resistor.

Don't free electrons in the conducting wire require an electric force to be exerted on them by the electric field produced by the battery in order to drift towards a net direction and thus produce a net current?

Now, recall that an electric field accelerates electric charge. Since charge moves freely within an ideal conductor, no electric field is required to maintain a steady flow of charge through the conductor.

Thus, in steady state, there is no electric field within the (ideal) conductors connecting the battery and resistor.

If there were a switch in your circuit that is initially open, then there is a transient associated with the closing of the switch that (rapidly) decays to the steady state solution.

To get a better feel for this transient behavior, one might consider the two conductors to form a (lossless) transmission line with some characteristic impedance $Z_0$ that is, in general, different from the resistance $R$ of the load such that there is a reflection at the load back towards the source.

An example of transmission line transient analysis is here. 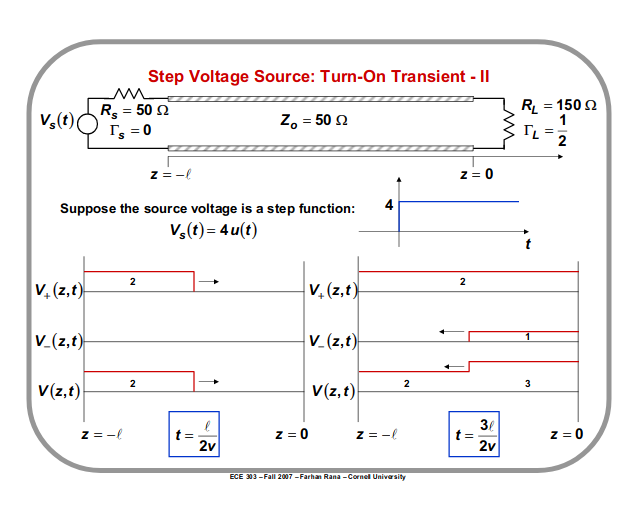 Not the answer you're looking for? Browse other questions tagged electrostatics electric-circuits potential work potential-energy or ask your own question.

1
Why the electric potential energy the charges carry in a electric circuit does not vary with its distance to the opposite terminal?
1
Electric potential in a wire
5
How does resistor affect drift velocity?
3
Why don't we consider the electrical potential being converted into kinetic energy when working with circuits?
1
When talking about potential difference in a circuit, whose work done are we talking about?
0
Relationship between Electric Fields, Potential Difference and Resistance in Circuits
1
Why is the potential in conducting wire of negligible resistance is same as the potential of the terminal of the battery to which it is connected?