Is it possible for a system to be chaotic but not ergodic? If so, how?

In a recent lecture on ergodicity and many-body localization, the presenter, Dmitry Abanin, mentioned that it is possible for a classical dynamical system to be chaotic but still fail to obey the ergodic hypothesis, which is frankly a pretty remarkable combination of properties. Unfortunately, the lecture had a lot of ground to cover and Abanin did not elaborate.

A trivial example of a non-ergodic, chaotic system is a 2D conservative system that is not fully chaotic, i.e., with a mix of regular and chaotic regions in its phase space: each individual chaotic region is ergodic in itself, but since trajectories cannot cross the regular, invariant barriers between those regions, the systems as a whole is not ergodic.

An example of such a system is Chirikov's Standard Map: 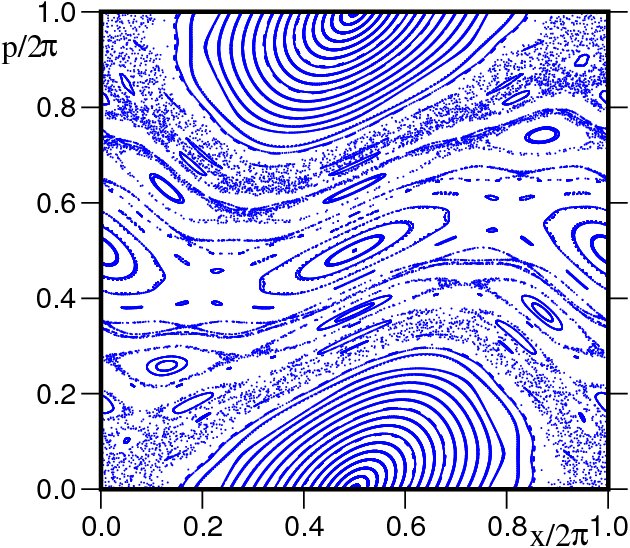 Not the answer you're looking for? Browse other questions tagged classical-mechanics chaos-theory ergodicity or ask your own question.

0
What can be the smallest chaotic system?
5
Help explore a self-feedback camera-monitor chaotic system
2
Can an Ergodic dynamical system approach equilibrium?
1
Does big bang have really any justification while we are living within a huge chaos?
1
Can binary sequences generated from ergodic maps be chaotic?
7
Why is the Virial Theorem not a Special Case of the Ergodic Theorem? What is their Relationship?
0
How does chaotic situation arise in planetary motion in solar system?
1
Two Independent Harmonic Oscillators is NOT Ergodic!
3
Is it possible to quantify how chaotic a system is?
0
How is the universe both non-ergodic and quantum?