Can binary sequences generated from ergodic maps be chaotic?

Briefly, the way symbols are generated is:

I am facing technical difficulties in following the paper. My question is: Such binary sequences are just i.i.d. random variables of some distribution. How can we say that these sequences $s$ are chaotic?

When such 0/1 sequences are generated, they are just i.i.d random variables of some distribution.

As for identically distributed, consider any sequence when changing $A$. The higher $A$, the higher the probability that the symbol is $1$.

As for independently, consider the sequence generated by a tent map and then transform all values via $$f(x) := \left(x-\tfrac{1}{5}\right) \bmod 1.$$

The corresponding sequence could as well have been generated by a somewhat shifted tent map, which looks like this: 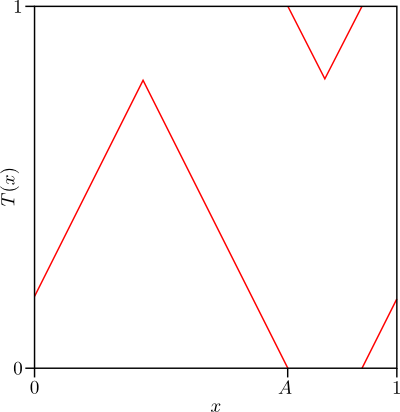 How can we say that these sequences S are chaotic?

Thus, the more precisely, we know $x_0$, the longer can we accurately predict the sequence $s$, but any finite precision will make it impossible for us to predict $s$ forever. This is very reminiscent of the Butterfly Effect.

Not the answer you're looking for? Browse other questions tagged mathematical-physics probability statistics chaos-theory ergodicity or ask your own question.

2
Symbolic dynamics of a multidimensional system

0
What can be the smallest chaotic system?
2
Can an Ergodic dynamical system approach equilibrium?
2
Symbolic dynamics of a multidimensional system
0
Can tearing a piece of paper be chaotic?
1
If $f(\cdot)$ is a chaotic map, then is $f^{-1}(\cdot)$ known as the inverse map which is chaotic?
0
Is it possible to trace back a chaotic system, to its initial conditions from some given interval?
4
Can a linear system be chaotic?
9
Is it possible for a system to be chaotic but not ergodic? If so, how?
0
Are there chaotic maps that commute?