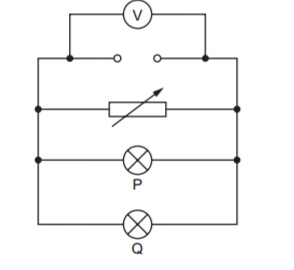 In the figure: When the variable resistance increases, what happens to the brightness of both lamps P and Q?

The model answer states that the brightness of both lamps don't change.

I know that the voltage across the lamps and variable resistor is the same since all components connected in parallel. But what about the current, it is impossible to stay the same!!!!

Can anyone please explain why they must still have the same brightness before and after change of the variable resistance value?

If you are not told otherwise, you have to assume that the voltage source is ideal, meaning that it can maintain its voltage regardless of what resistances (or other loads) are in the circuit, and that it has the means to provide whatever current is necessary to maintain that voltage.

Okay, it's an interesting question. Your problem is right: the brightness stays the same.

First of all, I can't resist saying that I would expect 0 brightness haha. Because the circuit, as it is drawn, has no power sources. I guess the upper element is meant to be a voltage source. However, if you write "V" in the circle, that's the symbol of a volt-meter, not a power source. Consider changing the symbol for a battery or a voltage source.

After that comment, let's suppose the circuit consists in two lamps, a resistor and a voltage source, all of them in parallel.

The key is that

A voltage source provides a fixed voltage, but the current it provides is unknown, as it depends on the circuit to which it is attached.

That's the first idea. The second one is:

A lightbulb can be regarded as a resistance, at first level approximation.

That means that we have 3 resistances in paralell.

The variable resistance allows changing the current through that resistance. $I_{var}=V/R_{var}$

But the total current is $I_P+I_Q+I_{var}$. This is the current powered by the source. But the source is a voltage source, not a current one. A voltage source can have any current allowed by its components.

What is happening is that the current supplied by the source varies, in order to keep the voltage constant, which is the source's mission.

Keeping the voltage constant requires a sacrifice: the current supplied by the source might vary.

Brightness of lamp (power) depends on two factors: 1)Current which flows through the lamp. 2) voltage (p.d) across the lamp.

First of all, obviously this is not true for all types of lamps because it says the brightness (lumens) of a lamp depends only on wattage. We know than an LED light of equal brightness to a tungsten filament light is much lower in wattage. I'm sure you mean this only in the context of changes in the given circuit.

I know that the voltage across the lamps and variable resistor is the same since all components connected in parallel. But what about the current, it is impossible to stay the same!!!!

Not the answer you're looking for? Browse other questions tagged homework-and-exercises electric-circuits electric-current electrical-resistance voltage or ask your own question.

0
Voltage across parallel combination on adding another resistance
1
Potential Difference Across Components in Parallel & Series Circuits
0
Ohm's Law Complications
0
Brightness of lamps
1
Confusion about the impact of resistance in a parallel circuit
1
How same power is distributed in different voltages in power lines?