A $ 2.0 kg $ box of cucumber extract is being pulled across a frictionless table by a rope at an angle $ \theta=60° $ (from positive direction of $ x $ axis, we have taken horizontal surface of table as $ x $ axis) The tension in the rope is $ 12N $ and causes the box to slide across the table to the right with an acceleration of $ 3.0 m/s² $ But the direction of net force is along the rope. The direction of acceleration isn't. Why is that?

Let the unit vector in the upward direction be $\hat u$.
If the box is the system with no rope pulling on it then there are two external forces acting on the box:

Since the box is in static equilibrium

Now allow the rope to apply an extra external force on the box $\vec F$.

A common misconception is that the normal reaction force stays the same.
Just to show you that there are times when this is not so assume that the force due to the rope acts vertically upwards thus $\vec F = F \hat u$

If $F<W$ it will still be a static equilibrium situation

So the magnitude of the new normal reaction force $N'$ has been reduced because of the introduction of a third external force acting on the box.

Not realising this is where, I think, the following misconception has arisen.

But the direction of net force is along the rope.

In this case you cannot just take the static equilibrium situation without the rope and then add another force and assume that the two forces before are still of the same magnitude.
Certainly $W$ stays the same but if the force due to rope has an upward component (ie will be trying to lift the box up) the magnitude of the new normal reaction force $N''$ will be less than $N$.

The free body diagram is on the left and the vector addition of the three external forces (roughly to scale) to give the net force $R$ is shown on the right. 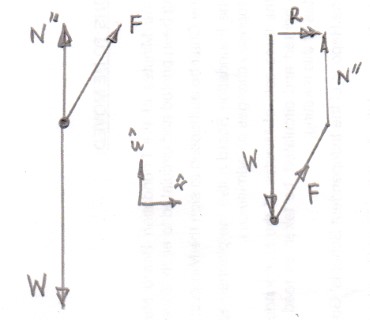 You have to look at all the forces acting on the box, the downward force of gravity (mg), the reaction force of the table, and the vertical and horizontal components of the force exerted by the rope. See the free body diagram of the box below.

Since there is no friction opposing the horizontal component of the rope force, the box will accelerate horizontally according to Newton’s second law: 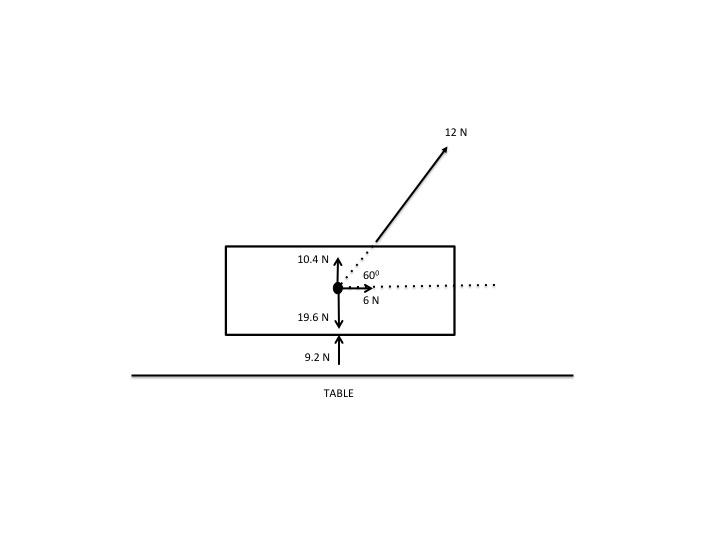 Not the answer you're looking for? Browse other questions tagged homework-and-exercises newtonian-mechanics forces classical-mechanics kinematics or ask your own question.

1
I think there is something wrong with this problem. How do you know if the vertical acceleration is zero?
0
Find the tension and angle from a vertical of a rope hooked up to an object
3
Tension in a rope
0
Why is the tension between two masses connected by a rope and undergoing a force along the direction of the rope less than that force?
0
How does acceleration carry over when the tension force is at an angle?
1
How can the friction force equals to the net force in this momentum question?
0
Direction of Vectors in Net Force Questions