Is there any use of a quadratic equation of state in FLRW cosmology?

Consider standard FLRW cosmology. Usually, the relation between energy density $\rho$ and pressure $p$ of a cosmological fluid component is linear: \begin{equation}\tag{1} p = w \, \rho, \end{equation} where $w$ is just a constant ($w = 0$ for the dust model, $w = \frac{1}{3}$ for ultra-relativistic radiation, $w = - 1$ for the cosmological constant, etc). I'm interested in applications of the following non-linear equation of state (quadratic in this case): \begin{equation}\tag{2} p = -\, \kappa \, \rho^2, \end{equation} where $\kappa$ is a positive constant. I never saw any textbook or paper discussing such an equation of state. Is there a reason for that? I would like to find some references on it.

The state equation (2) describes phantom energy when $\rho > 1/\kappa$ and may lead to a Big Rip scenario.

So was the equation of state (2) already discussed before (surely!)? Any reference on it?

EDIT: Here's a cool graph made with Mathematica, of the evolution of the scale factor $a(t)/a_0$ for a model containing a cosmological constant ($\Lambda > 0$) and a fluid described by equation of state (2) (with $\kappa$ very small). For the parameters selected, the universe is spatially closed ($k = 1$), and there's a Big Bounce without any singularity (no Big Bang and no Big Rip). There's a timid inflation era, a matter domination era and a Dark energy era (second inflation): 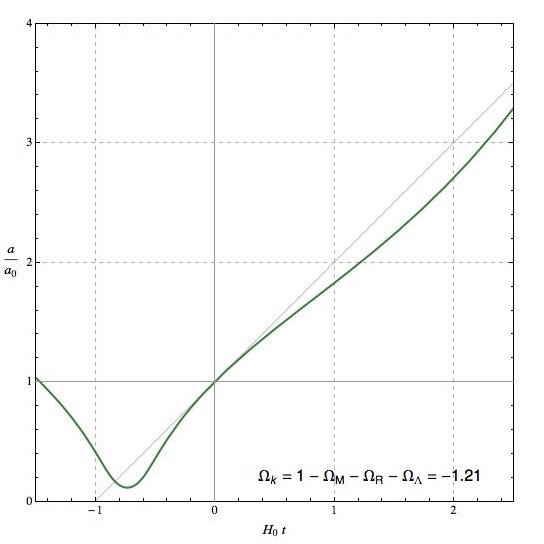 7
Could the cosmic fluid be better described as a kind of van der Waals gas, or a kind of foam, instead of a dust gas?

12
evidence on the equation of state for dark energy?
7
Could Dust Equation of State have some negative pressure?
6
Proper interpretation of $\rho_\textrm{rad} \, a^4$ in cosmology
13
FLRW cosmology with a scalar field : what are the phase-space variables?
8
Scalar field cosmology model: what should be some “realistic” values?
4
How to derive the two Friedmann-Lemaître equations from a Lagrangian?
3
Dipolar magnetic field pressure
7
Could the cosmic fluid be better described as a kind of van der Waals gas, or a kind of foam, instead of a dust gas?
2
Is this the Melvin metric (magnetic universe) in disguise?