Let's say, Observer A is at rest and Observer B is in a spaceship moving at a significant fraction of speed of light. B synchronized his atomic clock with A's when his spaceship just passed A. 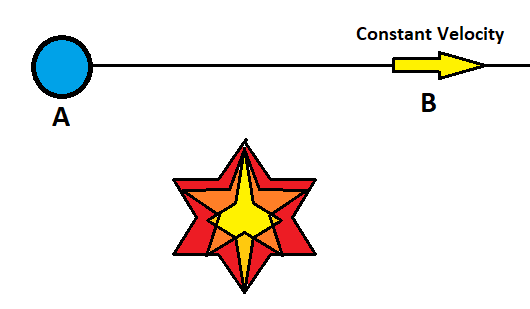 Now, some time later a star becomes a supernova and A and B observe (record the time coordinate) of this event supernova. The exchange messages to compare the time they recorded with each other and they see that they measured different times for the supernova event.

A sees that the calcium clock of B runs slower, and viceverza. But the problem is not symmetric. First, the supernova is moving relative to one of the observers. That observer will see that the distance betweem him and the supernova is smaller than what the stationary observer will see. Second, at least one of the observers has to accelerate if they are going to meet again. The acceleration changes things in such a way that the cesium clock has marked less ticks for the moving/accelerating observer. To him, the cesium clock of the stationary observer was running slow when he moved at constant speed, and then accelerated when he was decelerating.

Similarly, the time of the supernova depends on the reference velocity and the two measurements were using different reference velocities. Nothing changed about the measuring devices, they were just used to measure different things.

Not the answer you're looking for? Browse other questions tagged special-relativity spacetime time time-dilation or ask your own question.