I am trying to project the ground path of an Elliptical orbit with an arbitrary inclination angle of $\Delta i$ and a period of $T$. I have all the parameters of the orbit (semi-major axis length, semi-minor axis length, eccentricity, apogee and perigee velocity, energy, etc.).

The approach I was taking was plotting a position of the satellite in the elliptical orbit on an X-Y plane. I iterate through the time domain $t \in [0,\textrm{T}]$ where T is the period of the orbit with a specified time step of $\Delta t$. For each time, I calculate the mean anomaly and the magnitude of the distance between the satellite and the center body, $r$. When projecting the position vector of the satellite with respect to the center body on the semi-major axis, the length of that projected vector will be defined as $x$. After finding $x$, I found the vertical projection of that same position vector, thus forming the triangle below.

First of all, I need to find mean anomaly as a function of time. My code is currently not working, but in theory what I am doing is (from Curtis's Orbital Mechanics for Engineering Students, 1st Edition) I am solving numerically for a quantity labeled as $E$ using the equation for mean anomaly (eqn. between 3.12 and 3.13 for those who have the book), given as: $M_e = E - e\sin(E)$. From there, I solve numerically for true anomaly using eqn. 3.7a:

After finding those distances, I found the spherical coordinates of the satellite with respect to the center of the center body. $r$ would be $r_p + x$, $\phi$ would simply be the complement of $\Delta i$. $\theta$ would be the true anomaly.

After that, I plot (x,y) using spherical-cartesian transformation, but I simply do not believe that it is that straightforward. For one, what I am essentially trying to do is projecting a 3D curve onto a sphere and then projecting that onto a 2D plane. If anyone has sources/reading material on how to actually do this math, that would be fantastic. I was referencing this chapter from a book on satellites: http://fgg-web.fgg.uni-lj.si/~/mkuhar/Pouk/SG/Seminar/Vrste_tirnic_um_Zemljinih_sat/Orbit_and_Ground_Track_of_a_Satellite-Capderou2005.pdf. Unfortunately I cannot reference other equations that the book references until I get it.

I have not gotten the code to run yet, so I do not know what my plots look like but from preliminary data, it does not seem to be going in the right way (e.g. True anomaly ($\theta$) should be going from 0 to $2\pi$ as time increases, but that is not what is outputting.

EDIT: Typos and to clarify, I do not want to use external packages such as STK. I want to be able to physically come up with these plots. 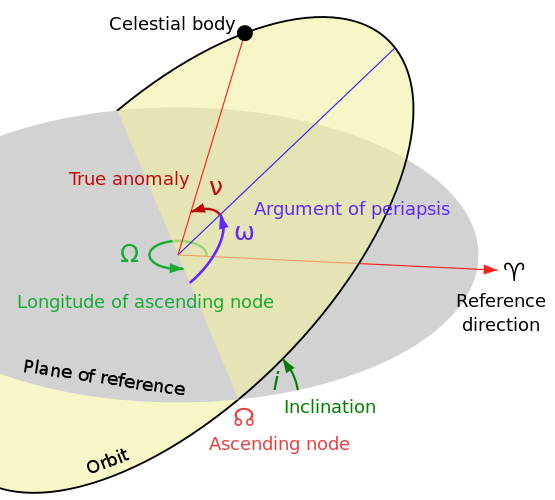 How /is/ True Anomaly varying in your results? If it's varying from $-\pi$ to $\pi$, it might be okay, and merely a result of the computer restricting the ranges of the various trigonometric functions automatically.

You shouldn't need to solve numerically for True Anomaly ($\theta$) from Mean Anomaly (M). It is fairly straightforward to pull it from Eccentric Anomaly (E), and Orbital Eccentricity (e) once you have those values.

When I was working on a program to run Kepler's equations a few years ago, there were several things I did: First and foremost, for elliptical orbits, I would rectify the value I had for Mean Anomaly into the range $(-\pi,\pi]$ , which allowed for more code reuse when I did the version that dealt with hyperbolic orbits.

Given that assumption, the range on Eccentric Anomaly will also be $(-\pi,\pi]$, with the same signs as Mean Anomaly.

And that allows you to pull True Anomaly on the elliptical orbit with the following equation:

Pick the value of True Anomaly that has the same sign that the Eccentric Anomaly did. The result will, as with the other Anomalies, be in the range $(-\pi , \pi]$

If you truly need the value of True Anomaly in the range $(0,2\pi)$, you can subsequently add $2\pi$ to all negative values of $\theta$.

Not the answer you're looking for? Browse other questions tagged newtonian-mechanics classical-mechanics orbital-motion or ask your own question.

3
Know altitude and speed of an object in orbit, with true anomaly
1
My orbiting body is orbiting about the wrong focus of it's elliptical orbit… why?
3
Hyper/parabolic Kepler orbits and "mean anomaly"
3
Kepler's third law is unintuitive
0
Why is an elliptical orbit with central mass is not allowed in two-body problem?
0
How to find position vector in Kepler orbit?
3
Angular position as a function of time for elliptical orbits