Clarification of proper time and inertial frame of reference

I am a homeschooled high school student who has been trying to learn about special relativity, but I was stumped by the answer to part (b). For part (b), the answer is “no (the start and end of the flight are spatially separated)”, however, isn’t the frame of reference for the hobo inside the boxcar? Furthermore, the term “proper time” is the “time interval between two events that occur at the same location in an inertial reference frame.”

It is useful to draw a spacetime diagram (a position-vs-time graph, with time running upward by relativity conventions). I've drawn it on rotated graph paper to make it easy to show the tickmarks along various segments.

Observers are represented by [thin]* curves ("worldlines"), which advance upward inside the lightcone at each event. The events on a worldline are "timelike-related" to each other. (By thin*, we mean no thickness or extent. To model an "extended object" [like a boxcar], we need a family of worldlines.) 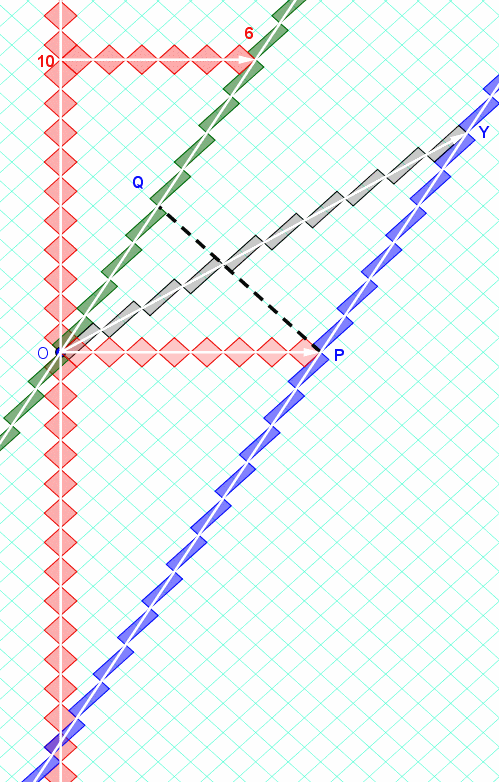 What it should say say is that "(the start and end of the flight are spatially separated for every observer)"... so PQ cannot be a proper-time-interval.

I think the problem comes from ambiguity of the question itself. Of course hobo can make a clock out of traveling photon, and claims that every passage of photon from front to rear and vice versa is for example 1 second. This hypothetical clock will measure the proper time of hobo himself though. What question is asking here imo is that does hobo measure the proper time of moving photon? Of course not! He is not at the rest with respect to the photon after all.

The requirement for proper time fails in this case because the front and rear of the boxcar are in different locations. The hobo cannot observe the time the beam reaches the rear of the boxcar simultaneously with the actual event because he is not there, and the information of that event must travel back to him.

A good rule of thumb is that proper time is the time ticked off by a single clock. In the case of the hobo firing the laser, you would need two clocks to measure the interval, one next to the hobo to record the time the laser was fired, and the other at the rear of the boxcar to record the time the light arrived there. That means the duration of the interval depends on the synchronisation of the clocks, and in reference frames moving relative to the boxcar the clocks will appear out of synch owing to the relativity of simultaneity.

If the hobo had thrown a clock the length of the boxcar, then the clock would record the proper time of its flight. However, since the hobo had fired a beam of light, and it is not possible for any clock to travel at the speed of light, it's not possible for a single clock to be present at the start and end of the light's journey along the boxcar.

Let's say the Hobo fires the laser from the rear towards the front, because I just prefer that direction. And let's say the speed of the boxcar is 0.99 c relative to the track.

Not the answer you're looking for? Browse other questions tagged homework-and-exercises special-relativity reference-frames inertial-frames observers or ask your own question.

1
Length contraction and simultaneous length measurements
31
"Reality" of length contraction in SR
2
Confusion about proper time in special relativity
4
Why are the proper time and the proper length not defined in the same frame of reference?
2
Is the defintion of *inertial reference frame* given by Blandford and Thorne acceptable?
0
In the twin paradox, can light signals be used between twins to figure out what their proper times were when the light signals were sent?
2
Mark left by laser pulse on spaceship
1
What is proper time, proper velocity and proper acceleration?