Are protons and neutrons affected by the Pauli Exclusion Principle?

I'm very confused about the Pauli exclusion principle. Wikipedia states it as "two identical fermions cannot occupy the same quantum state in a quantum system". I understand this for electrons that for each energy level in an atom there are two possible electrons that may occupy this energy state but with opposite spin numbers.

What about for protons and neutrons?

Apologies, I'm not very familiar with quantum theory or the maths involved. I super confused about how the exclusion principle works for protons and neutrons. The only explanations I've been able to find consider 2 protons and state that they can have different spin. What happens when we consider more than 2 protons/neutrons?

I say to a reasonable approximation because neither nuclear orbitals nor atomic orbitals really exist. The atomic orbitals we all know and love, the $1s$, $2s$, etc, appear in an approximation known as the mean field. However the electron-electron pair repulsion mixes up the atomic orbitals so strictly speaking they don't exist as individual separate orbitals. This effect is small enough to be ignored (mostly) in atoms, but in nuclei the nucleons are so close that the nuclear orbitals are heavily mixed. That means we have to accept that the shell model may be a good qualitative description, but we have to be cautious about pushing it further than that.

The nuclear force is largely independent of the electric charge and affects neutrons and protons in approximately the same wave. As a result, both species live in a common potential knows as Wood-Saxon (or inverted Fermi) potential. This is the average potential felt by one nucleon and generated by all other nucleons, irrespective of species.

Whereas neutrons are not subject to a Coulomb force, protons are so, as a result of the Coulomb repulsion, the energy levels of protons are typically higher than those of the neutrons, and the proton part of the potential also has a " tunnelling lip". This is well illustrated in the figure below, which sketches the filling of (not realistic) nuclear levels for a nucleus with 6 protons and 6 neutrons. Note that the nuclear potential is spherical, so the split in the middle is meant to cleanly separate the radial shape of the proton and neutron potentials. The nuclear radius $r_0 A^{1/3}$ is very nearly the same for both species. 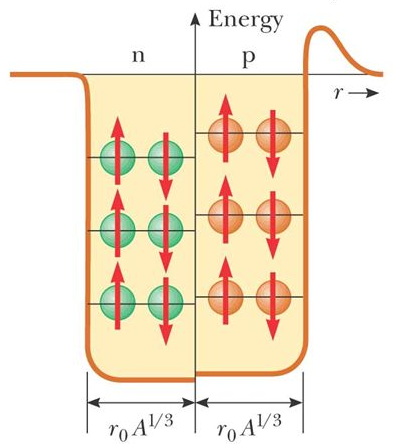 Note that in addition to the above two interactions, there is also a very strong inverted nuclear spin-orbit interaction, which splits the spherical symmetry and produces energy levels with strong $j$-dependence, where $j$ is the total angular momentum of a nucleon.

Not the answer you're looking for? Browse other questions tagged nuclear-physics fermions pauli-exclusion-principle spin-statistics identical-particles or ask your own question.

16
Position of protons and neutrons in a nucleus
18
Do distinguishable fermions obey the Pauli exclusion principle?
11
How can the nucleus of an atom be in an excited state?
14
What is an intuitive picture of the motion of nucleons?
8
Evidence that nuclei contain neutrons and protons (other than nucleons appearing if a nucleus is smashed)?
2
Pauli exclusion principle: why does it imply that $Z\approx N$ in stable nuclides with $A<40$?