I often see precision measurements of the $t\bar{t}H$ process at the (HL-)LHC justified by the statement that "it's the only cross-section that's directly proportional to the Higgs-top Yukawa coupling".

Note: I mean production of a top quark pair in association with a Higgs boson, as in the diagram below. 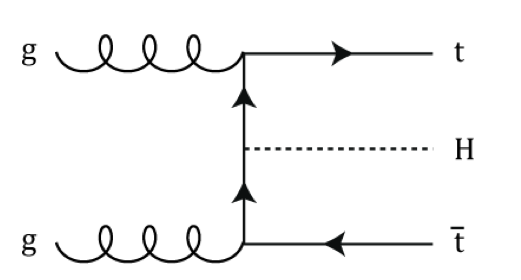 If all you want to understand is why $\sigma$ is proportional to the top Yukawa then the answer is pretty easy. Cross-sections are proportional the square of the amplitude for the process. Higgs production with associated tops has two amplitudes, the one in your question and one that looks exactly like it but with the gluons swapped.

To calculate an amplitude from a diagram you use Feynman rules. Each external line comes with some kinematic function of an outgoing particle's momentum, each internal line comes with a propagator, and each vertex in the diagram carries a coupling constant. The coupling constant for the vertex between two top quarks and the Higgs boson is -- by definition -- $y_t/\sqrt{2}$.

Not the answer you're looking for? Browse other questions tagged standard-model higgs specific-reference large-hadron-collider scattering-cross-section or ask your own question.