Why doesn't Earth appear smudgy or blurred in space photographs due to its fast rotation?

Whenever we take a photograph of something moving at a considerably high speed, its image appears fuzzy/smudgy/distorted due to motion blur. Why doesn't this happen in case of Earth photographs from space, taking into account the fact that Earth rotates at a speed $\approx 1675 \,\text{km/hour}$?

EDIT : tfb's lovely answer provides useful insight for the problem and helps solving it by utilizing some simple trigo and Mathematical manipulations. Diracology and macgyver_sc have also provided "Non-Mathematical" (or at least Non-Highly_Mathematical) explanations for the posed problem. Be sure to check these three answers ! A BIG THANK YOU to all of you who up-voted, supported and answered my question. It is just my second question on this site. Hope you Enjoy ! ^_^

[Caveat for this answer: it (both parts) is almost literally a transcript of a back-of-the-envelope calculation: there may be mistakes.]

A 50mm lens on 35mm film has about a 40 degree angle of view. Let's assume we're pointing that lens at the Earth so the Earth fills this angle of view, we are looking down at the equator, and the camera is not co-rotating with the Earth. Rather than do any complicated sums we'll assume that the end points on a line drawn through the centre of the planet and ending at the surface subtend 40 degrees to the camera. If we assume the radius of the earth is $R$ and the angle of view of the lens is $2\theta$, this gives us

where $B$ is the distance from the camera to the centre of the earth. From this we get

where $b$ is the distance from the point on the surface of the Earth directly under the camera to the camera.

The next thing we want to know is the angular size of a pixel for the camera. If there are $N$ pixels across the field of view, then at the centre of the field of view a pixel subtends an angle of about $(2\tan\theta)/N$ (I might have this wrong).

So, now, finally, the time for a point on the surface of the Earth directly under the camera to move across one pixel is

So, in other words, it takes a point on the equator of the Earth about 3.5 seconds to move a single pixel across the image for a camera with a 25M pixel sensor and with with a normal lens, taking a picture such that the Earth fills the entire picture, if the camera is not co-rotating with the Earth. A typical exposure might be a couple of milliseconds.

This is why the Earth does not seem to be blurred when viewed like this.

It's worth noting, as pointed out by Jibb Smart in a comment, that the radius of the earth vanishes above: the parameters which control the motion blur are $\omega_E$, the angular velocity of the Earth, $\theta$, half the angle of view of the camera and $N$, the number of pixels, or equivalently, the resolution of the image if that is dominated by some other factor such as the lens. So this result applies to a photograph of any spherical, rotating object (it would need to be corrected for very wide angles of view as my assumption that you can see the ends of a line through the planet becomes seriously wrong in that case: fixing this is just a matter of doing slightly more correct trigonometry though, I was just lazy).

The calculation for low Earth orbit

Errol Hunt pointed out in a comment that a more plausible case is to consider a camera on a satellite in LEO, so let's do that.

We know that satellites in LEO orbit the Earth in about 90 minutes. This means that we can just ignore the Earth's rotation to a good first approximation, so we'll do that.

For a light object in a circular orbit about a point mass at a distance $r$, the speed of the object is given by

The Earth is well-approximated by a point mass because of Newton's shell theorem, so for a satellite a distance $h$ above the Earth we have

Where $G$ is Newton's gravitational constant, $M$ is the mass of the Earth, & $R$ is its radius.

If the satellite is looking down at the Earth directly below it, then in time $\delta t$ it sees the surface move by $v\delta t$. Assuming that $\delta t$ is sufficiently small, then the image will move by an angle

So again, we want to know how long $\delta t$ can be for this to be the same as a pixel at the centre of the image. From above this means that

(where now $\theta$ is half the angle of view again, sorry), and so

Again, this is why the Earth is not blurred when we take pictures of it from space.

There are two reasons.

The camera might just move at nearly the same speed as the Earth. In this case there is nearly no relative motion and the Earth looks nearly static.

The second reason applies when the Earth has a high velocity relative to the camera - yet it is possible to get good images. What causes blur in the photo is not the speed of the object but the number of pixels the image excite in travelling through the optical apparatus (similar reasoning applies to the eye instead of a camera). If the photo is taken from space the camera is probably far away from the object. Despite the fact that the object is very fast, the light rays sweep the CCD at a much slower speed. To see this, consider the figure below. 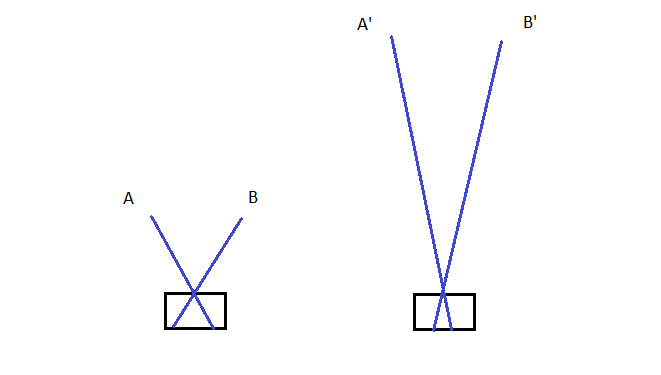 The black box represents a camera and the blue lines are the light rays coming from a close object traveling from A to B and a distant object traveling from A' to B'. Both are fast objects but note that the distance the light rays cover in the back of the camera (CCD) is smaller in the second case even though they correspond to the same time interval in both cases. If you extrapolate the distance, you can see that image nearly stays still in CCD during the short time the shutter is open. It will not sweep the CCD and therefore will not blur the photo. If the object was closer, the light rays would sweep the CCD faster and the image would blur.

I read the other answers and I just wanted to complement them with my photography background.

For example: If I set the shutter speed of a camera to 5 sec, the camera will absorb light for 5 sec, superposing any light that moves. That's how light painting is made. 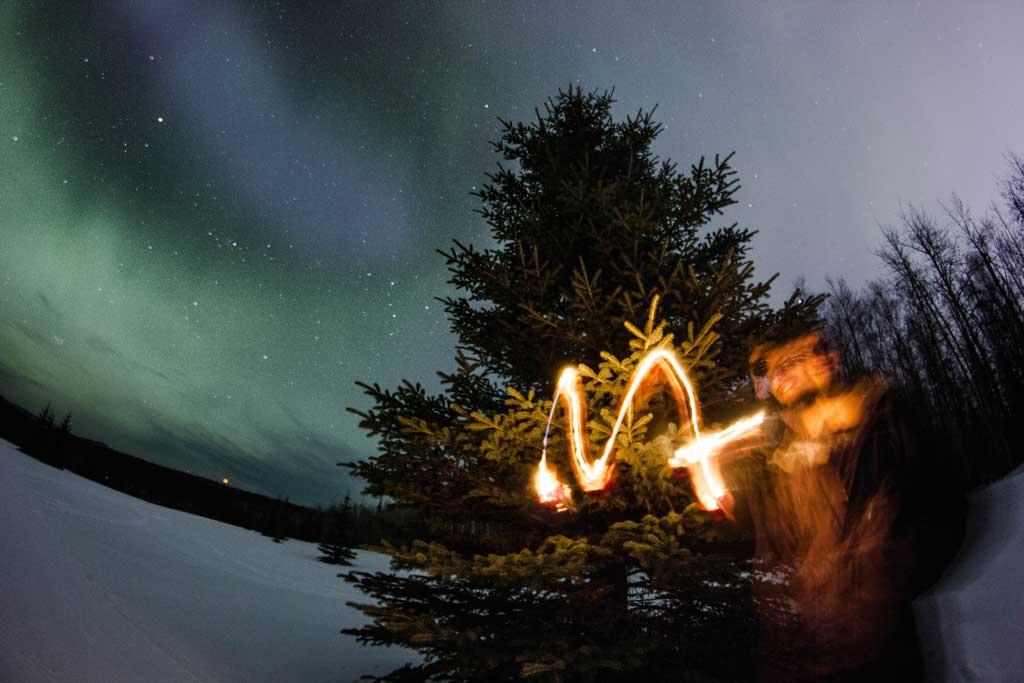 This is a picture of me drawing with light when I lived in Alaska.

So if anything is blurred in a picture, it does not necessarily mean it was going fast. And if something is too fast and you want to take a clear picture of it, just turn up the shutter speed.

Just think of slow-mo videos. They take things that go at really high speeds and record it with a camera that takes hundreds of photos per second. Each photo was taken with a shutter speed that was fast enough to not have the object blurred.

You could actually take non blurred pictures of the earth from space with a normal Canon/Nikon camera we use on earth. That's what Scott Kelly did during his year in space.

Any easy way of thinking about it is to realize that your speed relative to the satellite is the same as the satellites speed with respect to you. So it is equivalent to ask if a satellite would look blurry if you took a picture of it. If you have ever seen a satellite in the night sky, then you have an idea of how fast they move, and it should be obvious that they just don't move fast enough for blurriness to be an issue.

images are blurred because of angular velocity, not linear velocity. while the earth is rotating quite quickly, photos of the earth are taken from very far away. as such, during the time that the camera is capturing light, the earth might only move a fraction of a degree in the frame. looking at it another way, even if the earth does move 1675kph, that is only 465 meters per second. so during a 1-second exposure, the earth would only rotate 465 meters. while that might seem like a lot, that could be only 1 of over 20 thousand pixels showing the earth at the equator. so technically it would be "blurry" in the sense that every pixel would be "blurred" together. but it would still look sharp because you can't see the individual pixels when you look at a standard-resolution photo from a standard distance.

there are a few other things to consider: