It is frustrating. All textbook always only treat 1D Images. 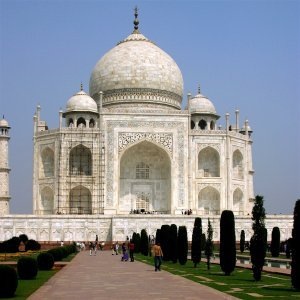 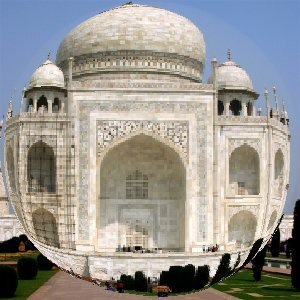 I have looked into Ray transfer matrix analysis, but I could't figure out how to compute such a distorsion of the image, which is also coherent with physics.

Another effect of a lens, is that things can appear in focus or out of focus depending on the focal distance $f$ and your position $d_2$.

In the end I would like to write a neat mathematica code, in which you can import an image and based on the parameters, $d1$, $f$ and $d2$ it will create the resulting image, including distorsion and blurr in a physical meaningfull way.

But first I need to understand the physics correctly. :)

I would highly appreciate any help! :)

First, one needs to understand that there may be additional lenses, such as the one in your eye or in the camera that help to produce the image that your see. If we ignore such a lens and consider only one lens then one can compute the result as follows. (One can include the additional lenses, but then computation would need a few extra steps.)

The light shown in your images is poly-chromatic (consist of multiple colours). So you'll need to perform the calculation for all the different colours and then add the results.

The first step is the perform the free space propagation of the light coming from the object. The general expression takes the form $$ g(u,v) = \int f(x,y) K_z(u-x,v-y) dx dy . $$ Here $f(x,y)$ is the two-dimensional function of the light field coming from the object, in the plane of the object; $g(u,v)$ is the light field at a location $z$; and $K_z(u-x,v-y)$ is the appropriate kernel function for propagation of the light over a distance $z$. The nature of the kernel function depends on the nature of the light, namely, whether it is coherent, or incoherent. In case the light is coherent, the kernel is given by the Fresnel kernel $$ K_z(u-x,v-y) = \Phi(u-x,v-y) , $$ where $$ \Phi(x,y) = \frac{i}{\lambda z} \exp\left[\frac{-i\pi}{\lambda z}(x^2+y^2)\right] . $$ (Here, I've used the convention that phase increases with time.) The kernel function in the case of incoherent imagining is a bit more complicated. In general one needs to consider the propagation of the mutual coherence function of the optical field, which is the correlation function of the optical field with itself, each of which is propagated as if it is a coherent field. See for instance the van Cittert-Zernike theorem.

So the idea is now to propagate the light all the way to the lens. Then one multiplies the light field with the transmission function of the lens, which is given by $$ t(x,y) = \exp\left[\frac{i\pi}{\lambda f}(x^2+y^2)\right] , $$ where $f$ is the focal length of the lens. The result after the lens is then propagated again over the distance between the lens and the observer. Again, the situation is a bit more involved with incoherent light. I suggest you read up on optical transfer functions for a general treatment.

You'll notice that the expressions depend on the wavelength $\lambda$. So if the image contains multiple colours one needs to perform this computation for all the different wavelengths (colours) and then add (or integrate over) the results in the end.

Hope this addresses your needs.

Not the answer you're looking for? Browse other questions tagged optics lenses image-processing or ask your own question.

4
Proof of minimum distance between object and image of a convex lens image being 4*focal length
1
Understanding camera lens and sensor compatibility
2
What is the actual significance of the focal point of a lens?
1
How do I experimentally find an image projected by a lens?
0
Why does the human eye-lens have a constant magnification for a fixed object distance?
1
Shape of a virtual image
2
Seeing virtual image in convex lens of object kept beyond focal point
4
Why do we see a blurred image when the screen is not placed at the position where the image is formed by a convex lens?
1
Multiple Lens System
0
Infinity-corrected Objective Lens Microscope Design