Maxwell's Demon: Why does the entropy of the overall system decrease?

I'm trying to understand the logic behind this famous thought experiment, my confusion is as follows:

A quote I read recently says that

In an adiabatic expansion where the entropy stays constant the space available for the gas increases thus the speed of the molecules must correspondingly fall.

So my understanding of that statement is that the system is more disordered (entropy increases) if the space available for the gas increases, so to compensate the molecules must slow down to have $\bbox[yellow]{\text{less}}$ entropy (as the overall entropy change must be zero). 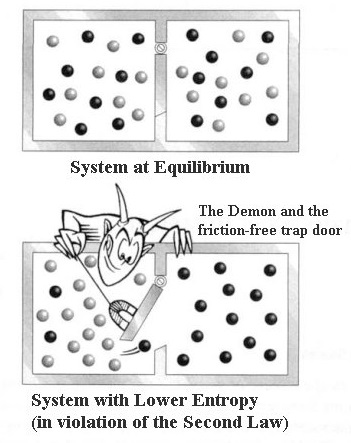 According to the image above, the whole system (A and B on the right box of the previous image) has a reduced entropy.

So does this mean that the entropy of side B has increased?

One of the comments below (which has been deleted now) mentions that the entropy of B does increase but the overall entropy of the system (A+B) decreases.

So the question that remains is: Why does the entropy of the system decrease and not increase?

Or; Why is side A more dominant?

You can think of entropy as measuring the amount of phase space volume that the system could be occupying. (This is the set of all possible sets of positions and momenta for all the particles.)

However, if you allow particle interactions, the particles in side $B$ will reach thermal equilibrium, and you'll get a distribution of velocities (i.e. some slow, some fast, and some very fast). Then the entropy of side $B$ increases.

The first way is more common in popular presentations since it's a bit cleaner, while the second is more realistic. But in both cases, the total entropy of $A$ and $B$ decreases, which is the key point.

So the box is hot on the right and cold on the left. Then one can use this separation of temperature to run a heat engine by allowing the heat to flow from the hot side to the cold side. Another possible action of the demon is that he can observe the molecules and only open the door if a molecule is approaching the trap door from the right. This would result in all the molecules ending up on the left side. Again this setup can be used to run an engine. This time one could place a piston in the partition and allow the gas to flow into the piston chamber thereby pushing a rod and producing useful mechanical work.

So remembering this is a paradox, if the demon "could" do his job, a system that previously could do no work because entropy was even all over, is now able to do work, so by definition entropy has decreased.

But the demon can't do the job, so this is just assuming he could.

Using the expression for the internal energy of an ideal gas, the entropy may be written:

Since this is an expression for entropy in terms of $U$, $V$, and $N$, it is a fundamental equation from which all other properties of the ideal gas may be derived. Note, no explicit $T$ dependence exists, as mentioned in the comments above.

Personally, I think this version of Maxwell's demon shouldn't be taught in physics classes at all, even though it's the way in which Maxwell originally formulated it. A much more straightforward way of explaining Maxwell's demon is to just talk about different kinds of molecules like Nitrogen vs Oxygen. (An even simpler version is to just call them blue and red balls, although this may lead people to ask how balls tiny enough to be considered "microscopic" can have distinct colors.)

We can imagine we have two different systems, one next to the other, we do not need to consider changes in volume. The reason being that entropy is extensive: if you have a system of volume V and separate the volume in two by adding a partition, the total entropy will not change. Also, entropy is a function of state, so it does not matter the path it takes to reach one state from another, the change in entropy will be the same regardless of the path you chose. Having said that, let us calculate the change in entropy for a partitioned system that goes from the same temperature in both sides to one that had different temperatures in both sides. For a single system the change would be:

If we call the initial temperature $T_0$, then the total change in entropy for both systems will be:

Not the answer you're looking for? Browse other questions tagged thermodynamics thought-experiment entropy or ask your own question.

3
Minimal Maxwell's Demon
5
Why does slow compression of a gas doesn't change its entropy to increase?
14
Does this thought experiment violate the second law of thermodynamics?
4
Is gravity Maxwell's demon in disguise?
5
Why does increasing the volume in which a gas can move increase its entropy?
5
In Maxwell's demon, why are all the cold gas molecules on the same side?
0
Can we deny information theory in Maxwell's demon explanation?