Is gravity Maxwell's demon in disguise?

Maxwell's demon is a thought experiment in which physicist James Clerk Maxwell suggested how the Second Law of Thermodynamics might hypothetically be violated. Basically, a demon controls a small door between two chambers of gas. As individual gas molecules approach the door, the demon quickly opens and shuts the door so that fast molecules pass into the other chamber, while slow molecules remain in the first chamber. Because faster molecules are hotter, the demon's behavior causes one chamber to warm up as the other cools, thus decreasing entropy and violating the Second Law of Thermodynamics.

So what if you flip the image above 90% clockwise and assume the existence of gravity in the direction of that yellow arrow?

Inside a vertical cylinder full of gas, the pressure should be lower at greater heights (e.g., greater distance from the gravity exerting center) --akin to the atmosphere above our heads-- considering that the pressure p exerted by a column of fluid of height h and density ρ is given by the hydrostatic pressure equation p = ρgh, where g is the gravitational acceleration.

Unless gravity indeed manifests itself as Maxwell's demon, thereby violating the 2nd law of thermodynamics; I must have missed something. What is that something?

This is the central flaw in your argument. The ideal gas law says no such thing. All that the ideal gas laws says is $p=R^\ast \rho T$, where $p$ is pressure, $\rho$ is density, $T$ is temperature, and $R^\ast$ is a constant, the universal gas constant divided by the molar mass of the gas (or equivalently, the Boltzmann constant divided by the mass of one molecule or one atom of the gas).

I must have missed something. What is that something?

In the scenario described in the question, the Earth's non-ideal atmosphere is replaced with an ideal gas in a (presumably insulated) container. Suppose the initial lapse rate in that container is super-adiabatic. In that case, convection will quickly bring the gas in the container to a state with the lapse rate is adiabatic.

In an isolated cylinder containing an ideal gas, diffusion will quickly become the only game in town, and it will eventually bring entire cylinder to an isothermal state.

Obviously, within the confines of the physical setup that you propose, a gradual stratification of layers would occur, (taking for simplicity, a single species), with the probability distribution function applied at appropriate intervals giving an overall vertical velocity profile.

But this would still produce a result completely independent of the hypothetical Daemon effect, with mixing between the layers only dependent on the function described below.

The Maxwell–Boltzmann distribution is the function:

This probability density function gives the probability, per unit speed, of finding the particle with a speed near ${\displaystyle v}$. 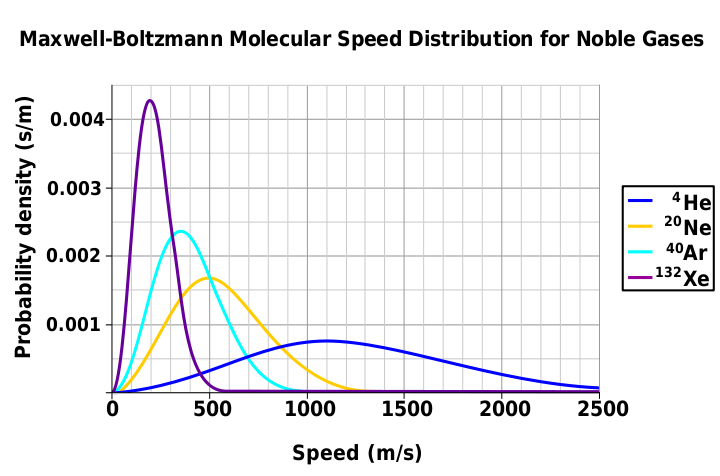 The speed probability density functions of the speeds of a few noble gases at a temperature of 298.15 K (25 °C). The y-axis is in s/m so that the area under any section of the curve (which represents the probability of the speed being in that range) is dimensionless.

So, although gravity would mimic, to within the limits of the PDF above, the effects of the Daemon, it could not replace or substitute for it.

There is no reason why the temperature should become higher in B than in A upon flipping because there is no selection for higher velocity molecules by gravity. Thus in A and B all molecules have the same mean kinetic energy. The gravitational field increases the density and thus pressure of the gas in B as compared to A due to the gravitational potential energy $U=mgh$ of the molecules according to $$\rho∝p∝\exp{{\frac{-U}{kT}}}$$ which gives for a small h just the linear hydrostatic pressure dependence $p=\rho g h$.

Not the answer you're looking for? Browse other questions tagged thermodynamics classical-mechanics ideal-gas fluid-statics thought-experiment or ask your own question.

0
2nd law of thermodynamics and gravity