Newton's first law states that an object that is in motion will remain in that motion going in a straight line unless acted by an unbalanced force.

So in case of a uniform circular motion we are essentially changing objects trajectory without changing its magnitude and that requires a force which is provided in this case by earths gravity. In the diagram below(Second picture) you can see that change in velocity(Blue vector) which is acceleration is pointing towards the center

Let's consider a different system: a ball moving in uniform circular motion by a string with a velocity $v$, When we observe the string it appears to be more stretched than it is when at rest, We also observe that faster the $v$ more stretched it is, This is because when an object has a larger velocity it is harder to change its direction of motion compared to when it has smaller velocity so because of this, string is stretched to provide more force through Tension. Mathematically we have to have force of tension equal to centripetal Force. Centripetal Force equation(proof of formula is explained very well in this question and also on khan academy):

must equal to Force of Tension provided by string:

from equation we can see that more velocity and mass an object has more string has to stretch to keep it moving in a circular path.

An objects centripetal acceleration is different when object has different $v$, More $v$ it has harder it is to change it's direction of motion, By saying above if you mean that "since there is an unbalanced force towards the center why doesn't it spiral down to center" It doesn't fall down to the center because centripetal force provided by Tension of a string is always the amount needed to only change the objects velocity direction, as a result it goes in a circular trajectory. 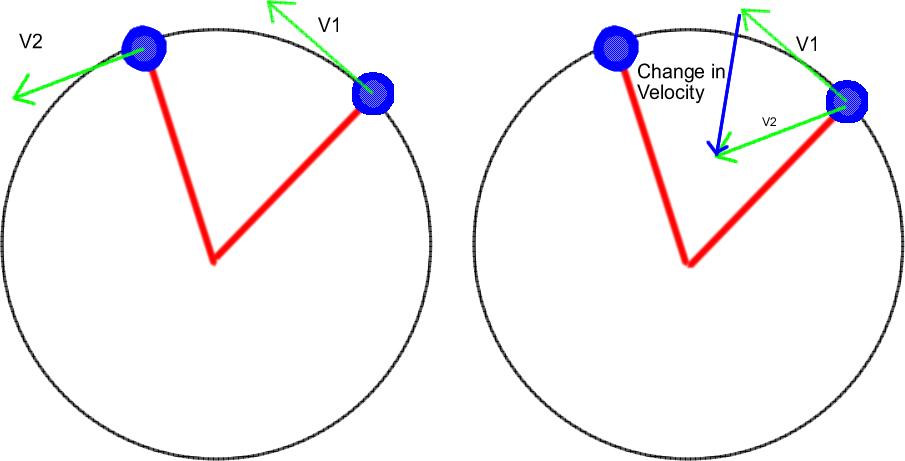 If a string broke there would no longer be this centripetal force to keep this object moving in a circular path so it will continue moving with that velocity $v$ in the direction that is tangential to the circle. 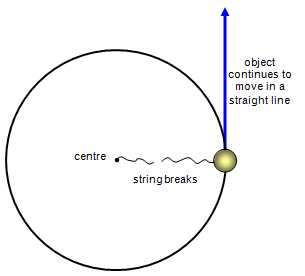 Not the answer you're looking for? Browse other questions tagged newtonian-mechanics reference-frames acceleration orbital-motion centripetal-force or ask your own question.