3D glasses giving the opposite effect to that expected

I have just finished watching the new Star Wars movie (The Force Awakens), and during the end credits, text is shown upon a background of stars. Wearing the 3D glasses, I noticed that the text appears in the foreground, and the stars appear in the background. On removing the glasses, I then noticed that the text is crisp, clear and drawn only once on the screen, whereas the stars are all drawn twice, with a constant distance (from left to right) between the two instances of each star.

The others have already provided good explanations, but since it sounded like an interesting question and I already sketched up a diagram, I thought I would show it, too. As already mentioned, if you have an object that is to be shown as the exact same distance as the distance between you and the screen, it's very easy to represent that: It's just a single object on the screen that looks the same to both eyes. If, on the other hand, you want to show an object which is far away, then you need to 'trick' your eyes by showing two separate images on the screen, one for the left eye and another for the right eye. That's indicated by the two hollow green dots on the screen on the diagram below. And if you want to show an object which is closer to you than the actual screen distance, then to trick your eyes two images at the locations of the hollow blue dots need to be presented on screen. Note that for objects that are to appear closer than the screen distance that the placement of the images is reversed: The image for the left eye is to the right of the image for the right eye, and the image for the right eye is to the left of the image for the left eye.

It's interesting to note that the apparent distances of the objects are all scaled to the actual distance of the observer to the screen, so audience members will have somewhat different impressions of the distances to the on-screen objects depending on how far from the screen they are seated. Perhaps something to take into account the next time you go to see a 3D movie.

(P.S.: On the diagram the actual observer-to-screen distance is assumed to be 30 feet. Hence, an object to be presented at an apparent distance of 30 feet is represented by a single dot on the screen.) 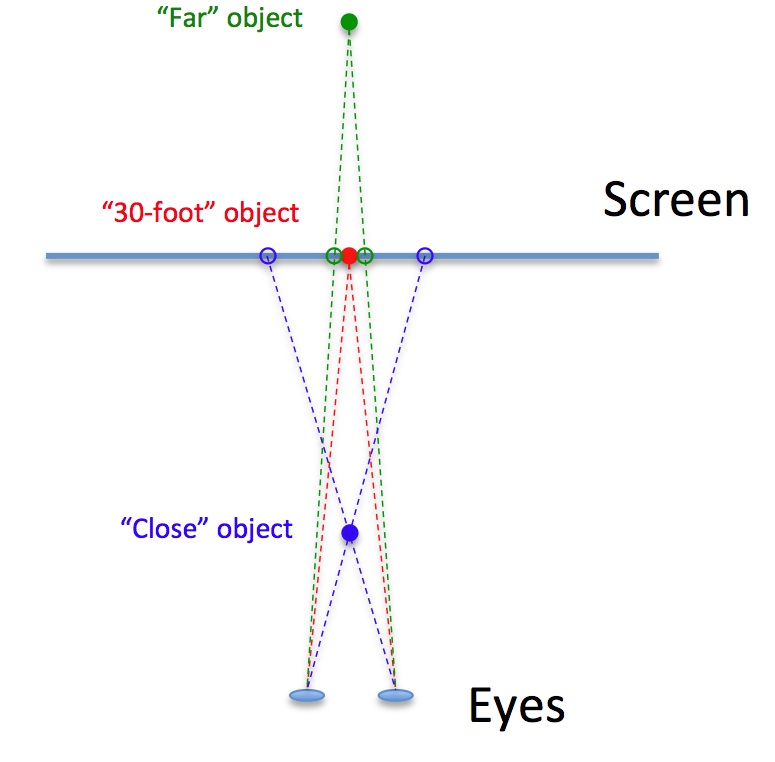 That's a very good observation! The screen is at a finite distance. If you want to show something at the distance of the screen, then, obviously (?) the two images would be in the exact same location on the plane of the screen. That's the text. Now imagine something way, way behind the screen (stars are at infinity). Draw an imaginary line from each star to your eyes. Where do these lines intersect the plane of the screen? At two different points, right? That's where the cgi algorithm places the left/right star images to make them appear at infinity.

Test question for max. points: Where would the stereo images be for something that should appear in front of the screen?

If the text appeared to be at about the position/distance of the actual screen in the theater and if the stars appeared to be much further behind the screen, then what you observed with the glasses off was exactly correct. To focus on the screen, which is not at "infinity", your eyes have to cross slightly. In that case, the stars that are intended to be much further away will have to have a different position on the retina of each of the eyes relative to the position of the text on each retina.

As others have noted, the stereopsis cues to depth would indicate that objects appearing on the same point on the screen for both eyes would be perceived as being at the screen. While points being farther appart in the direction of the eye(left eye image moved further to the left, right eye image further to the right) appear to be further away than the screen. So the stereoptic effect of the image would be as you experienced.

However note that stereopsis is only part of what we use to constuct a depth field for our perceptions. The fact that the stars are occluded by the text is sufficient that our mental image would perceive the text as being in front of the stars.

Not the answer you're looking for? Browse other questions tagged optics polarization vision or ask your own question.

0
3D glasses: how do we tell whether a doubly-rendered image is closer or farther than the screen?

0
Can reading glasses improve one's eyesight of objects lying in the long range?
9
Is wearing 3D glasses from the cinema as sunglasses hurtful to the eyes?
5
Can polarization effect the coherence length?
8
Viewing computer screen through 3D glasses, why the asymmetry?
0
why my eyesight glasses the color of the things I see?
0
Does crossing your eyes to see stereoscopic images provide the same effect as unfocusing your eyes (looking into the distance)?
3
How do glasses for the colorblind work?
0
Does the effect at Brewster's angle apply for all angles greater, or only at that angle?