While trying to understand polarization in quantum field theory, I wondered how a single photon could go through a linear polarizer. I found a paper which asked "Is a single photon always circularly polarized?"

For a single photon, the only similar physically meaningful question is whether the circular polarization is left-handed or right-handed. Quantum mechanics may predict the probabilities of these two answers. An experiment, a measurement of L/R, produces one of these answers, too. After the measurement, the photon is either left-handed or right-handed circularly polarized.

If a photon is prepared in a general state, it has nonzero probabilities both for L and R. In such a "superposition", we may perhaps say that the single photon has no circular polarization. This statement means that we are uncertain which of the polarizations will be measured if it is measured. But when the circular polarization is measured, one always gets an answer, according to the result of the measurement.

Linear polarizations are the simplest nontrivial superpositions of L and R. The absolute value of both coefficients, $c_L$ and $c_R$, is the same while the relative phase encodes the axis on which the photon is polarized.

A different question is the polarization of an electromagnetic wave. For a wave, e.g. light, one may distinguish left-right and right-handed and $x$-linearly and $y$-linearly and elliptic polarizations of all kinds one may think of. In terms of photons, a macroscopic electromagnetic wave is the tensor product of many photons. If all these tensor factors are linearly (or circularly) polarized, then the wave may be said to be linearly (or circularly) polarized. Because the polarization of the whole wave requires some correlation in the state of individual photons, a wave may be measured not to be circularly polarized in either direction. But an individual photon is always circularly polarized in one of the directions when the answer to this question is measured.

The paper may present a proposed experiments which may be done but what is completely invalid is the author's interpretation of this experiment – even "possible interpretations" before the experiment is actually performed. The correct description by quantum mechanics isn't included among their candidate theories with which they want to describe the experiment.

Answering my own question to close a far too long debate that heated far too much in my opinion.

The paper is unorthodox science, as it proposes a test to falsify in quantum mechanics.

A little advice to any beginners to the field like me, be aware that because there has been many unsuccessful attempts to falsify QM in the past, any talking about any new experiment to falsify and you will be looked upon as crackpot.

A little QM self fulfilling prophecy joke to end on a more light tone : "Obviously because we live in a QM world, any experiment that would falsify QM can not happen" :)

At the quantum-mechanical level this article supports Luboš Motl‘s answer above that a single photon—regardless of wavelength and energy—is always circularly polarized either right-handed or left-handed when measured.

The question, which hinges on phase, was marked as answered many years ago, however the debate rages on about what a single photon actually looks like “in flight”, ie. before it’s measured. The paradox is that measurement collapses the wave function. Trying to work around this paradox, Radosław Chrapkiewicz and others published “Hologram of a single photon” in Nature July 2016, pre-publish (free) version here.

The authors begin their paper by acknowledging how challenging it is to retrieve information that characterizes a photon due to the “entirely indeterminate global phase following from the perfect rotational symmetry of their Wigner functions in the phase space.”

They designed an experiment to measure information from 2000+ single photons arriving over time, where each detected photon was one of a two-photon polarization-entangled pair. The accumulated results built a hologram they feel more closely represents that of a single photon: 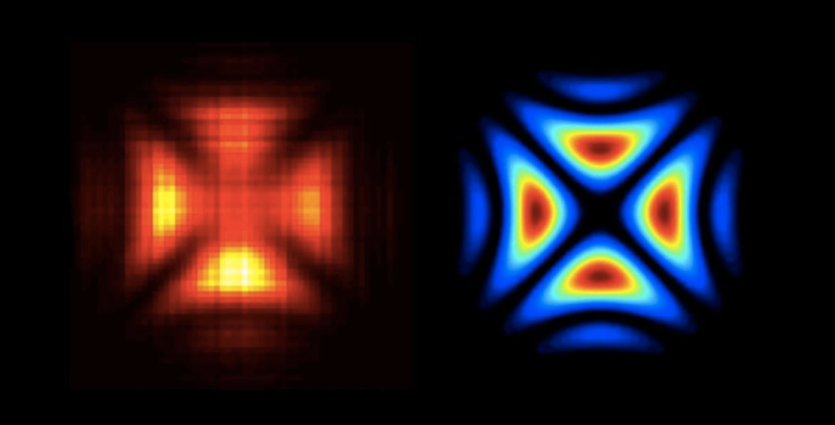 At the very least, the holographic depiction of a single photon adds to the commonly-seen illustrations of light-also used sometimes to depict a single photon- dating from James Clerk Maxwell’s era and still widely used today, and which some find confusing and counterintuitive:

Even if it works for a superposition of at least two photons, it’s much less clear how it could represent a single photon as it looks more like a standing wave than a traveling wave. To readers wondering how both the electric and magnetic fields of a traveling wave can simultaneously be zero for multiple photons see this question and its responses.

As readers of this question are most interested in single-photon representation, the following helical illustration (or its mirror) is, according to the first-referenced article, a more helpful representation of an individual photon:

Representations of a single photon, if the “always circularly polarized” view is the correct one, reveal that projections on each plane would be more accurately drawn 1/4 wavelength translated from each other:

However, if applied to single photons, all the cartoons imply an infinite length to single photons which is not supported by experiment, reminding us that all illustrations have limitations.

This article claims the debate is over the other way, that experiments prove single photons can absolutely be linearly polarized.

@darkblue accepted a “no” answer nearly 7 years ago, yet it seems more likely that the debate will continue, and hopefully adding new experimental results will help provide balanced context to future-askers of the same question.

For polarizers it is important only, how the photons E-field is orientated to the slits, in the case of 0° and 180° photons of both spin orientations are going through. (And artfully designed polarizers rotate photons with +/- 45° to the above mentioned orientations, so one get 50% transmittivity.)

For photons, going through birefringent calcite, the spin orientation play a great role. The calcite separates the two spin orientations. This is clear because even polarized light will be divided into two beams.

Circular orientated light has got a rotational momentum from the source emits it. The E- and B-field rotating together. Of course one could feel free to represent linear polarized light as a superposition of a clockwise and an anticlockwise rotating state. But this mathematics one is able to do with the state of a football too.

Not the answer you're looking for? Browse other questions tagged quantum-mechanics quantum-field-theory photons polarization or ask your own question.

4
Do Bell inequality violations appear instantly when the source is turned on, or do they increase over time?
1
How does a photon leave trace of its polarization state in a photon detector but not trace of which direction it came in?
6
light linear polarization and photon spin
1
Do circularly polarized photons have more energy than linearly polarized photons?
2
Specifying the state of polarization of a photon, a classical polarized beam of light, and connection with $\textbf{E}\pm i\textbf{B}$
0
Optics for photographing degree of polarization?
1
Question on the creation of an entangled photon pair in a specific realization of the EPR-Bohm Experiment
1
Why can't a single photon pass through a slit if it is perpendicularly (relative to the slit) polarized?