Can a mouse rotating a wheel violate conservation of angular momentum?

I have been thinking on the following problem.

Part I. Imagine we have a mouse enclosed in a rigid box. We placed the box on a frictionless surface (ice might be a good example). Can the box start moving because of something the mouse is doing inside? My answer to this question is: The center of mass of the combined system (mouse + box) will NOT move because there are no external forces and the internal forces satisfy at least the weak form of Newtons Third Law. So, Momentum is conserved for the system.

Part II. Now we put the mouse in a rigid wheel and we put the wheel on a frictionless surface or we suspend the wheel from its center on frictionless bearings. Can the wheel start rotating because of something the mouse is doing inside? My intuition will say YES it will move because I have seen this system in several pet stores and mice can actually rotate wheels. But I was trained in classical mechanics so, I know that the system must conserve angular momentum if there are no external torques and the internal forces satisfy the strong version of Newton's third law. So, How does it work in this case, I came with different ideas on how to reconcile the experiment with the theory but I don't like them very much. I want to get new insights.

In this case, gravity is still an external force. In a zero-g environment, the mouse would also begin to move around the inside of the wheel, opposite the rotation it causes in the wheel, which would keep the angular momentum at zero. This would happen because the only way for the mouse to exert a force on the wheel and rotate it is for it to push itself in the opposite angular direction, thus making both rotate about the central axis of the system.

However, in an environment with gravity, the mouse can make the wheel rotate by moving slightly away from the nadir of the wheel and allowing gravity to bring it back; wash, rinse, and repeat. In this way, it uses gravity as an external force to bring angular momentum into the system. The angular momentum added to the mouse-wheel system is drawn from Earth itself. However, the change in Earth's angular momentum would be so small in this case that it would be unmeasurable by any equipment we have. All in all, no laws are violated.

The angular momentum of the earth && mouse wheel system does not change. When the earth pulls on the mouse, the mouse pulls on the earth, so no net moment is seen any arbitrary point in the universe. 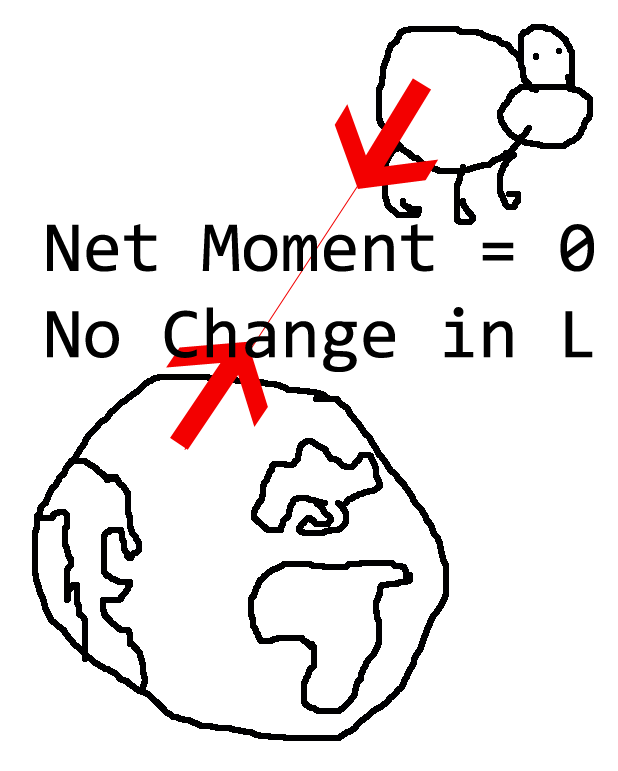 Not the answer you're looking for? Browse other questions tagged newtonian-mechanics rotational-dynamics conservation-laws free-body-diagram thought-experiment or ask your own question.

39
Intuition as to why the orientation (of a 3D object) is not a conserved quantity?
2
Is the parallel axis theorem valid for non-rigid bodies?
0
Why is it that a force that acts on two masses can cause both masses to accelerate at the same time?
4
Rotational Mechanics: Is Angular Acceleration Possible without any External Torque?
1
A game of boxes with rotating gears
1
How to identify internal and external forces acting on a system of particles?