Electric field due to a charged conductor

I have this grave confusion that I have been having since a while. When we calculate the electric field due to an infinite plane sheet of charge then the answer comes out to be $σ/2ε$. In this case we take a cylindrical Gaussian surface which extends to both the sides and that is why we have halved the electric field to get the answer. Now when I try to get the same for a charged conducting surface then why does the value double itself? The diagram in my book shows a rectangular slab kind of a conductor in which one flat surface of the cylinder (the Gaussian surface) is embedded inside the conductor and the other is outside. According to the diagram,then , there should be a back side of the conductor. So if I construct a Gaussian surface such that it extends out from both the sides ,then I should get the same answer as that for a charged sheet! Why do we not do this in this case?

All I know is that for a charged conductor the field inside is 0 and the charge resides on the surface.

electrostatics electric-fields gauss-law
Share
Improve this question
edited May 12, 2015 at 18:52

The basic concept is to see the charge distribution among them. From these example I hope your doubt will be quite clear

First let us take one non-conducting sheet then,

For curved surface it will be zero and let us take sigma distribution on sheet. See Figure 1.

Here Charges will distribute automatically. So now Let us take one gaussian cylinder passing through that sheet but not completely like till half of it sheet as shown in diagram. NOTE: It is not completely passed from the other end.

Reason : Because at the middle of the sheet there is flat surface of our gaussian cylinder and at that surface there will be 2 forces acting on it. First one acting left hand side and other on right hand side due to charge distribution at both of the surfaces equally. See figure 2.

Now again let us take gaussian cylinder and this time it will pass from other end completely. Now just before going to question let us take one example. Imagine that if we put one cylinder inside sheet then we will see that 2 layers sheet will come out. First from front of the sheet and another from the back side. Why I said this because since charge is equally distributed on that conducting sheet so charges will be in front and back side so that's why if we take one gaussian cylinder then 2 charge layer will act at that time means there will be change in the above equation which we are writing. 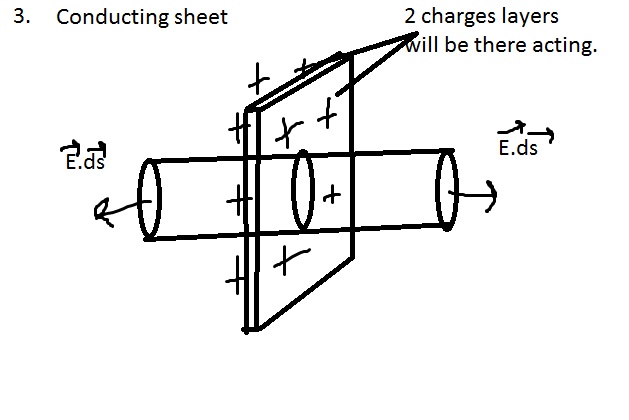 Which will make our equation

"So if I construct a gaussian surface such that it extends out from both the sides ,then I should get the same answer as that for a charged sheet! Why do we not do this in this case ?" If you do that you have to realize that the other side has the same amount of charge as the first, so the field is doubled.

When you consider a differential element of charge on the surface $\mathrm dq=\sigma\,\mathrm ds$ then, as you noted, this element alone also generates field lines going inside the conductor. However, we know that inside the conductor there are no lines (field=0). This is because the charge distributed over the remaining conductor's suface cancels the filed created by the charge in the surface element $ds$.