No electric field inside a conductor by Gauss's Law

So recently in our electrostatics course the lecturer keeps repeating a certain set of steps whenever he solves a problem, and I am not quite sure why these assessments are true.

Is there something I am missing here? Some additional implied assumptions? Or is the lecturer overgeneralising?

I can not see how you used Coulomb's law to get a field inside the wire( Remember, Gauss's law is a far more fundamental law than Coulomb's law).This should hold for a really long wire as well as it is a conductor as well as long as you do not apply potential difference across its ends. Apply the same logic as above. It should be easy to see the truth.

By Gauss's law, the flux is $q_{encl}/\epsilon$, so if you already argued that the field must have constant magnitude on the surface, the is must be that $$ \vert \vec E\vert S = 0 $$ if there is no net charge enclosed.

If the field is NOT constant on the Gaussian surface - for instance imagine a box where, in one corner there is a positive charge an in the other a negative charge, then nothing can be said about the electric field since $\oint \vec E\cdot d\vec S \ne \vert \vec E\vert \oint dS$. Even if you know the net enclosed charged, you cannot recover $\vert E$ since it is not constant.

In the case of your infinitely long wire, it is complicated to use Coulomb's law (because of the geometry of the system, especially if you want the field away from the axis). Then a Gaussian cylinder coaxial with the axis of your wire will not enclose any charge, but the field is constant on the surface of this cylinder. Thus the field will be $0$ everywhere inside.

As an intuitive explanation, consider the following picture: 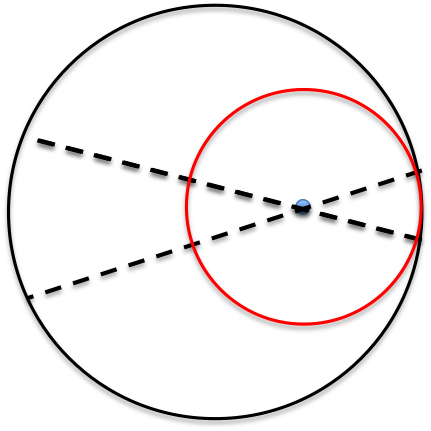 You see that the point is off-center. The charges of your cylinder on the part of the wall closer to the point are closer but they are geometrically balanced by the charges on the opposite side of the cylinder , which are farther from the point but greater in number. Geometrically the increase in the number of charges exactly balances the decrease in the electric field generated by these charges.

Note that the red circle is not a cross-section of the Gaussian cylinder, which would be coaxial with the cylinder, but is there to illustrate how the flux through both angular openings are the same.

Not the answer you're looking for? Browse other questions tagged electrostatics electric-fields gauss-law conductors or ask your own question.