Can you ever exert more downwards force than your weight?

So, because I'm a hardcore person, I risked all this afternoon by going out in the wind, the rain and the cold to construct a willow den.

Yes, it seems a menial task, but it was actually quite thought-provoking: some pieces of willow were harder to push into the ground than others, and to try and force them in I'd sometimes end up hanging off of them, but other times I'd just push with all my strength, placing my body above the hole and pushing down, my feet still firmly planted on the ground.

Now, I was wondering, which of these two methods is better for sticking the stick into the ground? Ignoring the fact that by hanging from it, it is likely to topple, which method help me be more efficient in my future den-building exploits?

In other words, can you ever exert more downwards force than your weight? If so, then I'm guessing pushing down would be the better method, and if not, then hanging from the stick, putting all your weight into it, would exert the most possible downwards force. 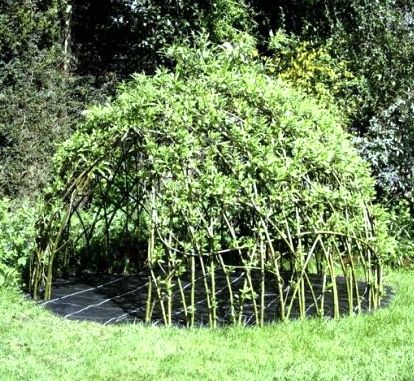 The force you can exert is your mass times your acceleration. By the equivalence principle, just standing still is equivalent to accelerating at 9.8 m/s2, which is where the force of your weight comes from when you just stand still. But it is easy to accelerate more - like when you jump.

The force is only limited by your ability to push yourself off (transfer force to) the willow shoot. Imagine that you lie down next to the shoot, holding it in both hands. If you now pulled yourself up rapidly (the way some circus acrobats can pull themselves up a rope while appearing to hang horizontally) then you apply all your weight to the willow - and if you are strong enough to accelerate yourself while doing this, you could apply a force greater than your weight.

However, as you probably realize, there are other far more effective means to drive a stick into the ground. The key is to convert momentum into force - the equation is

This equation tells us that the change in momentum ($\Delta(mv) = m\Delta v$) is determined by the integral of force and time ($\int F\cdot dt=F\Delta t$ if F is constant). This is a direct consequence of the equation $F=ma$, which you can integrate with respect to time to get $\int F\cdot dt = \int m\ a\ dt = m \Delta v$.

When you use a hammer etc, you give it momentum during a long swing (small F, large t); but it slows down and comes to a stop in a very short interval, meaning that for that short time the force is much greater. A post driver is the tool people use to try to replicate this on the scale of large sticks being driven into the ground (hard to hammer the top of a tall thin stick). It may not be possible to use in your particular situation - but in general, it will allow you to apply a force much greater than your weight (bot for a shorter time). This is also the principle behind pile drivers etc . All these methods require the object to be driven to be strong enough to support the force you use to drive them into the ground...

Use a lever. For an application like driving branches in the great outdoors, you would need to come prepared, or locate the site next to something heavy. Anchor one end of the lever under something heavy. Attach something to the branch to press against, and put the branch between you, at one end, and the fulcrum at the other. The lever acts as a force multiplier, so you can exert more downward force than your own weight.

If you jump upwards at the point where you begin to drive upwards you are applying a greater force on the ground than the standing still case, this difference is the reason why you accelerate upwards.

If you could somehow stand on the poles, squat down and jump explosively off them you would drive them into the ground with a greater force than your body weight. (If you could land on it again that would be even better!).

Sure, I can think of a couple of ways you can exert more downwards force than your weight:

(Disclaimer: Option 1 might be better/safer if dealing with thin willow sticks ...)

Yes, you can. The amount of force you can exert on an object is limited only by the geometry and strength of your muscles.

Specifically, the net force $F_{net}$ in this situation would be given by

Also note that as you move upwards, unless you were prepared to thrust your arms, your muscles may lose the geometry in which they were contracted, which would decrease the force they exert.

One approach everybody seems to have missed: increase your weight. Put some weights in a strong backpack.

Not the answer you're looking for? Browse other questions tagged newtonian-mechanics forces newtonian-gravity or ask your own question.

1
What is the maximum force you can exert on the ground with one leg?

3
Will a lighter car have a higher top speed than a heavier car with an equal power engine?
0
Can you justify force calculations using more than one of Newton's laws?
0
Centripetal issue when considering gravity
0
Problem of uncoupling a train
1
How exactly do walking canes and crutches help?
13
Pulley system on a frictionless cart
0
Why can you lift more weight with bad form?
0
Which method would generate the highest maximum force?
0
What exactly is the term of mass we should use for Newton's second law calculations?
0
Can the force on a single gate hinge ever be more than the weight of the entire gate?