Pulley system on a frictionless cart

Let's say you have a pulley set up as below on a cart, with a massless pulley and string. The mass hanging off the side is attached via a rail, and all surfaces & pulley are frictionless except between the tires and the ground (to allow for rolling, of course).

Furthermore, the mass of the weight hanging off the side is greater than that resting on top of the cart.

When the system is released from rest, will the cart begin to move or not? 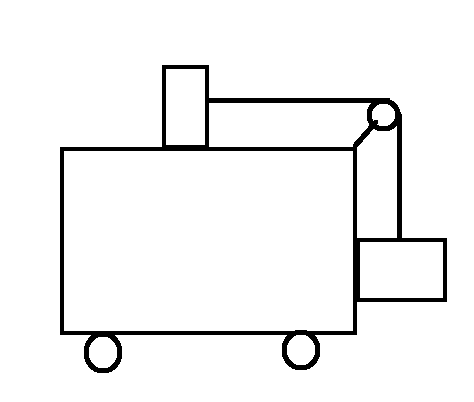 I would think not, because there is no force that could cause the cart to move -- since all surfaces are frictionless, it is as if the pulley and the cart are two separate entities.

However, what about the tension in the string and thus in the pulley connected to the cart? Does that not exert a lateral force capable of accelerating the cart?

Additionally, how does conservation of momentum play into this.

Since the system is initially at rest, the sum of the momentum vectors of each of the objects must add to zero at any point in time, right? So if the block on top of the cart is accelerating due to the tension in the rope due the force of gravity acting on the hanging block, does that mean the cart must move in the opposite direction so momentum is preserved?

Finally, where do non-inertial reference frames play a part in this? Since the cart is (potentially) accelerating taking the reference frame of the cart will lead to the introduction of "fictitious" forces. Is there any (possibly simpler) way to determine what will happen to the cart from this (non-inertial) reference frame?

Yes, the cart will move, due to the force applied by the string to the pulley.

To solve, calculate the string tension while the weights are moving, and then note that the pulley has to provide an opposing force in order to change the string's direction. The reaction to that force acts upon the cart, accelerating it.

Calculating the actual numbers will be entertaining, as you must include the cart's acceleration while calculating the string tension. I'm guessing that including a new, accelerating reference frame won't be helpful, as you won't know the magnitude of the acceleration until the problem has been solved.

From looking at the chart I would have to agree with everyone who said yes. But not roll but instead it would flip. Do to there being no friction stopping the cart from doing so and the hanging wait being heavier then the resting weight. If you add friction and weight of the cart you may come up with a variable that would fit the theory that the cart wouldn't move.

Not the answer you're looking for? Browse other questions tagged newtonian-mechanics kinematics or ask your own question.