Will a lighter car have a higher top speed than a heavier car with an equal power engine?

If I have a car (with a particular engine) optimized (shape & weight distribution-wise) for attaining the top speeds possible, and I put that engine into a car which is heavier (but otherwise the same shape & design), will the heavier car have the same top speed in the real world?

I'm guessing that the heavier car will accelerate at a slower rate, but I am not sure whether it would eventually hit the same top speed as the lighter car. Factors such as air resistance & the way racing cars are designed to hug the ground (as I understand it) might cause them to not have the same max speed?

If they don't have the same top speed, would it be possible to re-design the heavier car (i.e. change its shape and weight distribution) so that it has the same max speed as (or a higher max speed than) the lighter car? My thinking is that if the heavier car doesn't need to use the air resistance to "hug the ground" then it might be able to be designed more aerodynamically?

But could the heavier car go as fast or faster with a different design? Here's my reasoning:

So following this reasoning, wouldn't it be possible to build a heavier car which has greater $|v|_{max}$ than a lighter car?

Clarification: #4 is supposed to mean "when there's too little force pushing the car down, the wheels will slip, which reduces the amount of force the engine can provide". Is that correct?

The problem you've formulated is that these two cars are identical aside from the mass difference, so let's just limit this to two identical cars where one has an added weight in it. The heavier car will accelerate slower, based on simple $F=ma$, where $F$ is the same, so $a$ must be smaller for a larger $m$. Friction, which determines the max speed along with the force, is a little bit messier.

The air resistance is basically only affected by the shape of the car, so it will be completely unchanged. The heavier car, however, will have greater ground friction from the contact between the wheels and road and because of that will have a slower max speed. One way you can convince yourself that the tire friction depends on the weight of the car is to just consider that the the tire deforms and creates heat, and greater mass will cause it to deform more every turn. For super fast cars tire friction is actually extremely significant.

Due to increased formalism by the question, I can offer a little more detail. Here is a really basic force diagram I made for this. It's not perfect, but I think it's sufficient. And by the logic of the question, $F_{drag}$ is broken up into 2 parts where one is from the body and one is from the wing. Furthermore, the wing aerodynamic forces are really the wind specific drag plus $F_{wing}$. 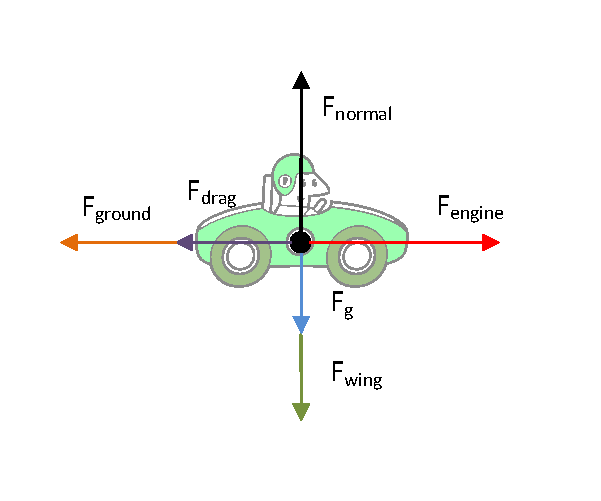 So, we were talking about increasing the weight of the car. That increases $F_g$ and $F_{ground}$ because in real life the wheel friction force has a significant dependence on the weight. The question mentioned the need for the wing in order to maintain traction. So, traction is a tricky point, because it is related to the weight.

It is my belief that if a given turning radius without slipping was needed for a race car, this quantity is what would need to be kept constant. I think this gets to a little of what the question wanted, which is that if the mass, $M$, changed, some redesign would be necessary to maintain the same traction (see the above equation).

The way I see it, the heavier car will have a higher top speed. Here's why:

Top speed occurs when the forces pushing the car forward (engine power) are equal to the forces holding the car back (aerodynamic drag, rolling resistance).

If you take two identical cars, but increase the mass of one car, they will have the same engine power, the same aerodynamic drag, and the same rolling resistance (see Note 1 below). The only thing that has changes is the mass, and since mass is not a factor in determining top speed, so top speed should stay the same.

Now I may seem to be contradicting myself. After all, at the start, I said the heavier car would have a higher top speed, but now I'm saying they will be the same. That's because there is actually another element at play here. The car's inertia is also pushing the car forward. So the real equation is as follows:

Note 1: Technically, rolling resistance increases with mass, since there is more weight on each tire. However, this can be offset by adjusting tire pressures, so is irrelevant. There is also more weight on the wheel bearings, but parts are designed well enough now that the resistance when adding weight is minimal, and can be ignored.

Not the answer you're looking for? Browse other questions tagged fluid-dynamics forces aerodynamics or ask your own question.

0
How can a petrol car require less fuel at 55mph than a lower speed at the same rpm?
0
Can Bernoulli fly a car?
1
How the wing creates lift? Why critical angle of attack is 16.5" for a supersonic jet and a kite?
0
Changing number of wind turbine blades
0
Power in 1st Gear