Is the planet Mesklin as described in Hal Clement's Mission of Gravity correct?

The book Mission of Gravity describes a planet with a mass of 16 times Jupiter spinning at a rate of one revolution every 17.75 minutes. This causes it to stretch out into an oblate spheroid and has an effective gravity of ~3g at the equator but a gravity at the poles that varies depending on how you calculate it from either 275g right the way through to 700g.

Leaving aside the improbability of the planet forming without gathering enough hydrogen to become a star, and without losing that enormous spin, and managing to cool down enough...

Modelling this planet at my head then anywhere that effective gravity increases in strength is effectively lower potential energy "down" from anywhere that it doesn't. I would expect this to cause the planet to deform and reshape so that the effective gravitation was equal at all points on the surface.

In other words it would be 3g everywhere, because at the poles it would be much thinner than at the equator, but not have the spin throwing you away.

Is this mental model correct? Or have I missed something? Is the fact that the spin is throwing you away from the poles the missing factor?

Even though you were wrong, you nailed the critical question at the heart of the necessary understanding. Bold is my emphasis:

Modelling this planet at my head then anywhere that effective gravity increases in strength is effectively lower potential energy "down" from anywhere that it doesn't. I would expect this to cause the planet to deform and reshape so that the effective gravitation was equal at all points on the surface.

A planet will deform and reshape so that the gravitational potential along its surface is constant. This is not the same thing as gravitational field, and you can follow this back to the physics 101 rigor of separating the notions of fields and potentials. On large scales, you should be able to walk along the planet's surface without doing any work. Our brains want to extrapolate this statement to also imply that gravity is constant over the surface. Actually, it only dictates the direction of gravity is constant, and not its strength. In a pseudo 2D world, the basic idea works as follows: 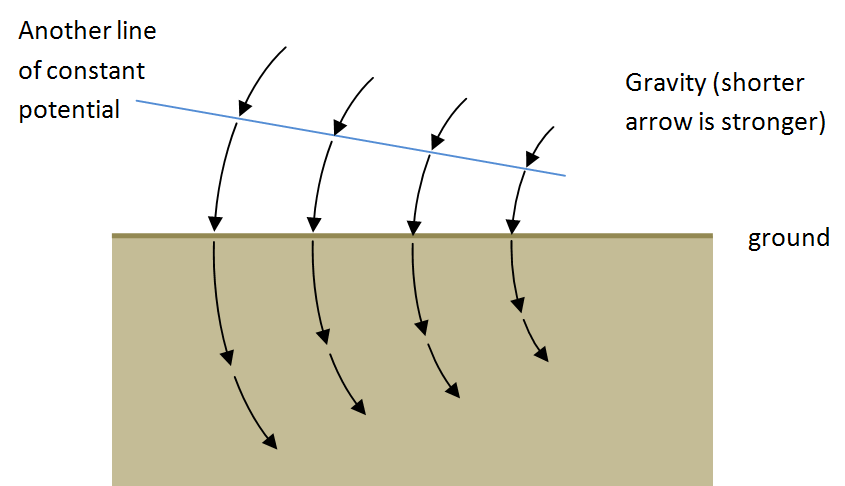 (EDIT: I have updated the image to be more accurate. The initial model had arrows going straight down, but this was problematic because it creates non-conservative fields, and I don't want to imply that is the case here. In the updated picture, the blue line could be reasonably imagined to be equipotential although my art skills are not great.)

In this weird world, you could take a train over to you neighbor's house and find the gravity to be noticeably different. This story does not violate the necessary physical criteria.

You might notice other strange things. For instance, if planes flew at an altitude where the air's density was a certain value, then we would find that they fly higher in the equatorial regions than in the polar regions. In fact, this effect is intensified further by the shape of the rotational false field. Since Mesklin rotates so fast, the height of a space elevator from the equator might only be a few 100 km or so. If you flew a plane high enough, the equations tell us you might make it all the way into space! In actuality, this tells us something different. If this were possible, the air would escape and leak out into space and Mesklin would be left as an airless world, even at its poles.

However, on the basic gravitational physics, the book had it right. The surface gravity varies as you travel along it. This does not mean that you walk up a slope to get to different regions with different values of gravity (that's what I hope the illustration helps with). Instead of walking "up" or "down" to a new gravity field, you walk "sideways" into it.

Your intuition is correct. At that scale, the planet behaves essentially like a liquid, and it's shape will equalize into an ellipsoid where:

But I don't think you could get an eccentricity as sever as that without the planet tearing itself apart.

What is the shape of a self-gravitating rotating body?
I didn't read through all answers but skimmed them instead. So far as I've read, are missing a piece.

As @Alan Rominger pointed out the gravitational acceleration at any point on a self-gravitating sphere varies with latitude, like it does on the Earth.

But the shape the body is complex and does not equalize the acceleration due to gravity over the surface of the body. Isostacy attempts to equalize the pressure/force on materials (materials under higher pressures squirt into regions with lower pressure). The pressure any particular region possess is product of mass of materials above that location multiplied by their acceleration due to gravity. It turns out to be an integration to calculate this value because both variables are functions of $ r $.

Actually figuring out the body's shape is probably best left to a Finite Element Method solver.

The video also mentions at rotational periods around this value, the body's shape is an oblate spheroid with 100% oblateness ($ r_{equator} = 2 \times r_{pole} $). Since they did use a simulation (I don't know if they used a FEM solver) to determine these values, I trust their numbers on this.

Not the answer you're looking for? Browse other questions tagged gravity planets centripetal-force or ask your own question.

9
Distribution of Gravitational Force on a *non-rotating* oblate spheroid
29
What nonlinear deformations will a fast rotating planet exhibit?