By what mechanism is lift produced on a rotating cylinder in an inviscid flow?

I am taking some introductory fluid dynamic classes, and have become very confused by the Kutta-Joukowski theorem. One of the conclusions that can be derived by applying Kutta-Joukowski is that a spinning cylinder in an inviscid flow will produce lift.

But how can this be the case? Let's consider this diagram of lift on a spinning cylinder in viscous flow: 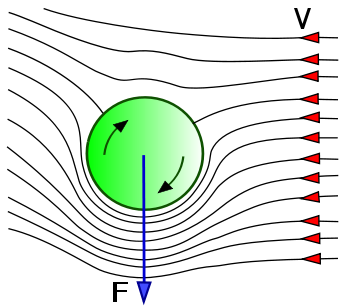 The mechanism by which this spinning cylinder would produce lift would be the unequal viscous shear on either side (due to different relative velocities to the fluid). The air on the bottom of the cylinder would be accelerated by viscous shear, whereas the air on the top would be retarded. This moves the downstream stagnation point (or equivalently, causes a deflected downstream wake), and the rest is Newton's third law.

That's so important to understand, I'll say it again:

However, we use it all the time. So what gives? It turns out that many of the effects we are interested in are viscous, but the viscous effects can be modeled various other ways. This is effectively the same type of question as Does a wing in a potential flow have lift?

Just like with a wing, we can ignore the starting problem by saying all of the initial transients and vorticity generated by viscous effects are far from the spinning cylinder. But we know circulation must be conserved, so that starting vortex that was generated by the viscous effects causes us to attach a vortex rotating in the opposite direction to the cylinder (or the wing, airfoil, etc.). This is the bound vortex that we encounter all the time in aerodynamics. It allows us to model the generation of lift around a body in an inviscid flow.

But it's really important to remember that lift does not exist without viscosity and likewise inviscid fluids do not exist! They are a mathematical construction that enables us to model phenomenon we are interested in modelling.

When we model this flow, we super-impose a vortex solution with a uniform flow solution. This gives different velocities on top and bottom and this results in different pressures and thus lift. But it only exists because we impose this vortex solution where the cylinder is. And we can do that because it is maintaining the requirement that there be zero circulation throughout the entire fluid (which includes the initial starting vortex). My very poor drawing of this for an airfoil found on my answer to why a wing has lift illustrates this: 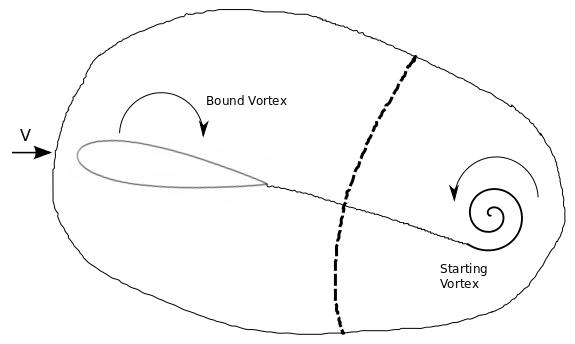 When we solve using the potential flow equations, we essentially cut our domain along that dashed line, removing the starting vortex from the domain.

Okay, superfluids are essentially inviscid. But we're not flying through super cold helium (usually) so we can ignore that exception.

The mechanism is known as Bernoulli's law (see e.g. wikipedia or scienceworld): A moving fluid, regardless of viscosity, has a different apparent pressure along the direction of motion and perpendicular to it. Along perpendicular directions, the pressure is reduced. This is the situation seen by your cylinder, which (when rotating as in your diagram) will see a higher relative flow speed on its upper side than on its lower side. The difference in pressure is lift.

EDIT: A perhaps even better pointer on Bernoulli's law than the links I gave above is hyperphysics. To communicate about the particular problem (lift generation from a rotating cylinder moving through a fluid), it helps to state its historic name, Magnus effect (wikipedia link).

Not the answer you're looking for? Browse other questions tagged fluid-dynamics viscosity potential-flow or ask your own question.

1
How can a rotating cylinder produce lift?
22
Does a wing in a potential flow have lift?

8
Why airplanes fly: the final truth
6
Conditions of applicability of potential flow about an airfoil
11
What is a Physically Accurate Explanation for the Kutta Condition?
5
Why does the vortex form in the von Karman Vortex Street?
5
Generation of lift and uniqueness for 2D Laplace equation around body
2
How would air flow inside a toroidal space station?
2
Stressing Over Stress Tensor Symmetry in the Navier-Stokes Equations
4
Flow through a hole in a sphere
1
Suppose you have airflow through a narrow glass tube. Does the air slip at glass surface?