Why airplanes fly: the final truth

Questions about the reasons aircrafts fly are frequent among scientist. Since the time I was in high school, even if I now work on the other side of the fluid world (Low $Re$ regime), I've kept asking my professors, advisors, colleagues, what was their own explanation of flight. I know about the controversy about the push downward, considered a common fallacy by the NASA website, and about the Anderson argument, denying the erroneous principles of equal times, and the overstimated role of the Bernoulli theorem. My best overall and simplest explanation is taken from Anderson, and consists in the following:

Somehow the air reaching the first edge of the wing, after the interaction with it, is going donward. This must be the result of some kind of force, and therefore, for the third Newton's Law, there must be an opposite force of equal strenght in the opposite direction, which pushes the aircraft up.

First: why does the air go down? Answer: the angle of attack and shape of the airfoil, together with simple pressure and stagnation arguments. Second: which is the role of the Bernoulli theorem here? If the air is pushed down by means of the "geometry", we don't need the difference of velocity between the upper and the lower part of the wing, but we have this just as a consequence of the change of pressure (due to the shape). Is that right?

My second question, actually, is about the most common and sophisticated explanation: the Starting Vortex Balance. The main argument is: due to the Kutta condition (a body with a sharp trailing edge which is moving through a fluid will create about itself a circulation of sufficient strength to hold the rear stagnation point at the trailing edge) the vorticity "injected"by means of the viscous diffusion by the boundary layer generated near the airfoil, to the surrounding flow, transforms in a continuum of mini-starting-vortexes. This leaves the airfoil, and remains (nearly) stationary in the flow.It rapidly decays through the action of viscosity.

By means of the Kelvin Theorem, which in the 2D case is nothing but the statement that the vorticity is constant along every particle's path, this vorticity must be balanced by the formation of an equal but opposite "bound vortex" around the airfoil. This vortex, being causes an higher velocity on the top of the wing, and a lower velocity under it, causing the arising of the lift by means of the Bernoulli phenomenon.

1) We are assuming that the vorticity leaving the wall (the no-slip condition make the airfoil wall a sheet of infinite vorticity) by diffusion, leaves the boundary layer and enters in the region where the Reynolds number is high enough to allow us to apply the Euler Equation, then the Kelvin Theorem (valid only for inviscid fluids). I usually explain this using the vorticity equation, that is a local version (in 2D) of the Kelvin Theorem: $$\partial_t\omega+\boldsymbol u \cdot \nabla \omega=\nu \nabla^2 \omega$$ in the boundary layer the viscosity terme dominates, whereas in the outer layer it can be neglected. When the vorticity arrives in the outer layer, vorticity is conserved and we can say that the structures arriving from the boundary layer must be balanced (in terms of vorticity) by the fluid in this region. And we can do this only because the circulation, which is the actual constant, is a line-integral, and if we don't cross the airfoil/BL region we don't have problem of any sort. Is this correct?

2) In this explanation the Bernoulli theorem seems to be a cause, generating the lift through the difference of velocity. Is this right?

Thanks in advance. I feel always a kid, asking about that issue. And at the same time, I feel an actual ignorant but curious scientist.

My apologies, I won't be reading your entire question.

But still I will provide an answer. Why is that? Because flight does not require any of the things you talk about.

The lift can be thought of a few ways. Think of the air molecules hitting the surface of the wood. They bounce off, in a downward direction. Well if we are pushing air downward, we must have an equal and opposite force, which is the lift. Or another way: we are gathering air under the board, it gets a little pressurized. The pressure is pushing up on the wood. This is really the same picture as the first if you think about it.

All the rest with airfoils and so on, all this has to do with developing lift efficiently, developing lift while minimizing drag. An airplane with flat plywood wings would fly, but it would have a lot of drag and would therefore be very inefficient.

People have been flying airplanes for the last century, so it's not news. Let me just point out a few things.

Here's one of my favorite pictures, of a Cessna 172 Skyhawk. It's the same model I fly. I'd like to draw your attention to a few things about it. 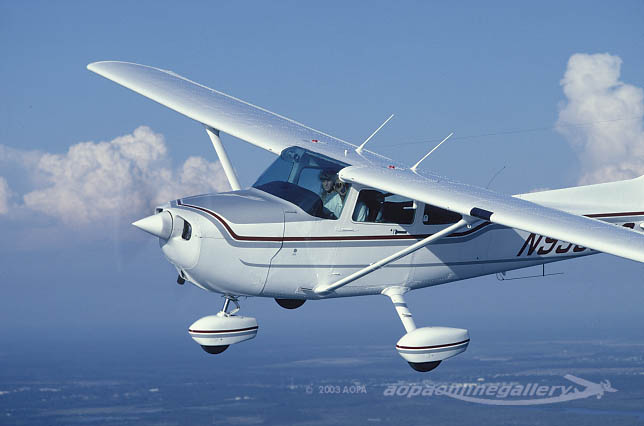 So I hope you get from that a bit of what is second-nature to pilots.

My favorite explanation for the lift generated by airfoils is this:

One side of the wing does the pushing. It accelerates a very large number of air molecules in a direction roughly 90 degrees from the direction of the wing's apparent direction of travel. The other side of the wing creates a free space for the air molecules to occupy. Air has mass, and therefore inertia, so there is a short delay before the air in the newly formed space reaches its previous density. By the time it does (at flying speeds), the wing has passed, or nearly passed that location.

Here is an example that illustrates what I mean:

Most people who have traveled in an elevator have noticed what happens when it begins to descend. Although their feet don't leave the floor of the elevator, they feel lighter for a short time. If the person were to be standing on a spring-type bathroom scale, I expect it would show decreased "weight" or pressure against the scale. The "upper" surface of a wing experiences the same thing, caused more or less the same way. The curved and downward angled upper wing surface causes the "floor" to be pulled out from under the air column above, reducing its pressure against the wing.

If I have made my explanation clear enough, it should be easy to understand. It's an attempt to explain what really happens, as opposed to using math, which can not be used to completely explain any real object or occurrence. That's a problem with math that tends to be forgotten, especially among mathematicians. Math can not provide a completely correct answer even when adding one apple to one apple, because an "apple" can not be fully defined using math or measurements. Apples are too complex for that, and no two are the same.

Lift is caused by air that is deflected downwards, through Newton's law of action and reaction, and not by something like the Bernoulli effect. This article goes to a lot of detail to explain that. The full book, Understanding Flight, is available from Amazon.

So the first thing to note here is that we genuinely don’t have it all thrashed out. Lift is a complicated and well studied force and the result is that we have multiple different models that all belong to different time periods and people. However, we do know some things. I should also say that you basically have it all there, it’s just that it’s interconnected. Now let’s dig into it all…

Not the answer you're looking for? Browse other questions tagged newtonian-mechanics fluid-dynamics aerodynamics or ask your own question.

270
What really allows airplanes to fly?
6
Yet another airplane question

1
What does centre of lift depend on?
2
Boundary Layer in aerofoil
5
Why does the vortex form in the von Karman Vortex Street?
5
Generation of lift and uniqueness for 2D Laplace equation around body
5
What causes the air speed difference above and below the wing of a plane?
3
What is irrotational flow? How to judge?