Would cosmological redshift be present in the following situation?

I'm trying to understand if cosmological redshift is just a secondary form of doppler redshift, or something else entirely.

Suppose the two galaxies in the picture are receding from each other, but there is a tether tied between two planets, many, many light years apart such that their velocities with respect to each other are exactly zero (or, if that strains the imagination too much, each planet has huge engines and effectively keeps the velocity between them zero). The planets no longer orbit stars, and only keep the tether exactly taut. This relationship has been in place for longer than the light travel time between the two planets. 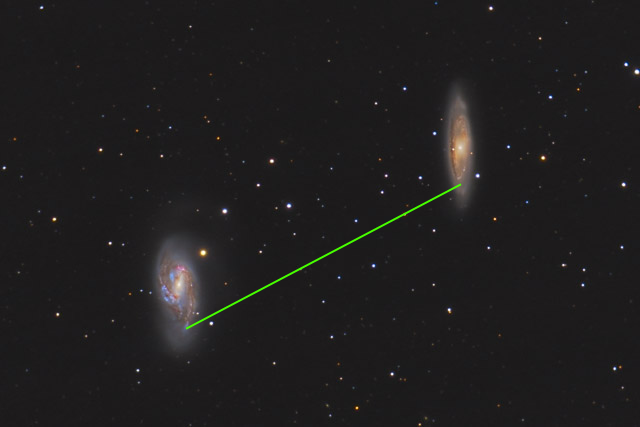 Would there be any cosmological redshift between the two planets, provided they were distant enough apart that $ \frac {a_{now}} {a_{then}} $ is sufficiently distant from 1?

If so, how could this redshift be explained? Where is the energy 'going' from the photons, lost to the expansion of space?

The observed redshift of a distant source is given by the sum of its cosmological velocity and its velocity wrt. the local Hubble flow, i.e. its so-called peculiar velocity.

That means that if you were able to accelerate the two planets at redshifts $z_1$ and $z_2$ up to velocities such that their relative velocity vanishes, they would measure each others redshifts to zero, whether you did so by means of a huge engine or a magical rope. Attaching the planets to each other means detaching them from the Hubble flow, i.e. giving them an actual velocity in comoving coordinates.

If they're sufficiently far apart, this perculiar velocity would exceed the speed of light. Since this is not allowed, this means that it's simply not possible to build an engine so powerful, and that no matter how powerful your magic rope is, it will break. The distance at which the expansion velocity of the Universe becomes larger than the speed of light is roughly 14 billion lightyears, so no objects farther apart than this distance can be attached to each other (in practice the limit is somewhat smaller).

You end your question with a second question that also applies to photons from "normal", non-attached objects: "Where does the energy from redshifted photons go?" That is a great question, that I'm sure must have been asked and answered before in this forum. Essentially, the key to the answer is "Forget about energy conservation in general relativity".

This is just a footnote to Pela's answer as he has covered the main points.

One way of understanding the redshift is that the energy in the light ray becomes spread out over a large region of space so the energy density, i.e. the energy per unit distance, is reduced as the spacetime it's passing through expands. In fact if we take the scale factor to be one at the present time, the redshift is simply:

where $\lambda$ is the observed wavelength, $\lambda_0$ is the original wavelength and $a(t_0)$ is the scale factor at the time the light was emitted (so $1/a(t_0)$ is the factor the universe has expanded since then).

Not the answer you're looking for? Browse other questions tagged space-expansion doppler-effect cosmological-constant or ask your own question.

5
Interpretation of cosmological redshift
5
Redshift of distant galaxies: why not a doppler effect?
4
A question on the redshift of photons due to cosmic expansion
31
If spacetime itself is expanding, how could we ever tell?
1
What is the behaviour of massive particles traveling between tethered galaxies in the FLWR metric?
5
Local effects of cosmic expansion