I'm competing in a simple robotics competition where most of the participants use reflected infrared light to detect their opponent. I'd like to make my own robot as difficult to see as possible. What common materials (fabric, plastic, paint, etc) absorb most infrared light, and reflect as little of it as possible? I first thought any flat-black substance might do, but I've learned that what appears dark in the visible spectrum might still appear bright to infrared.

The IR sensors that OP is talking about work by emitting IR from an LED and then measuring IR intensity reflected back from an object close enough (scroll to Sharp GP2Y0A21YK IR Proximity Sensor). Addressing the comments: the temperature of the robot and the resulting blackbody emission in the IR is small enough to be irrelevant to the question. IR is used specifically because objects near room temperature don't produce much conflicting signal.$^\dagger$

Q1: Will materials that are black to visible light also be "black" to infrared?

The answer is "not necessarily," as you stated in the question. Here is a neat video of a person's hand visible in IR through a black/opaque plastic bag, and here are some pictures of the same: 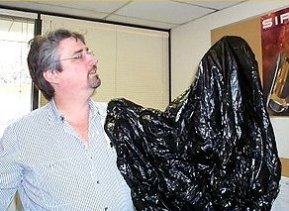 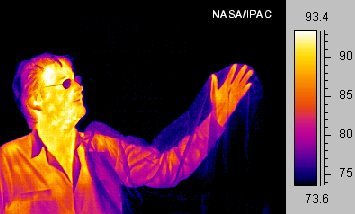 From a typical IR proximity sensor datasheet it indeed appears that there is no difference in ability to sense between reflection of IR off a white piece of paper vs. a gray one: 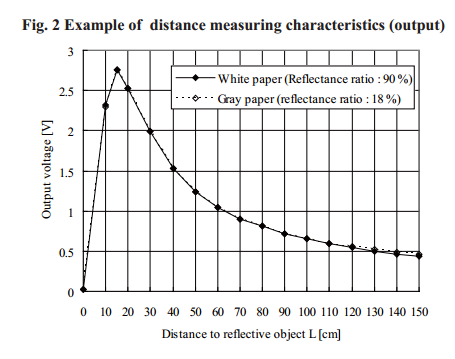 A quick search did not prove very fruitful. Glass is not transparent to IR, as you can see in the man's glasses in the picture above, as well as at 0:20 in this video. However, at 0:52 in the same video you can see that glass does reflect IR to some extent (when the hand is on the same side as the glass). As we've seen, the absorbance of light depends very much on the wavelength, so first you would need to figure out which wavelengths the opponent's IR LED would output. It may be hard to find a common material that absorbs through that entire IR spectrum, so don't forget there are many ways to skin a cat! Alternatives to making your bot out of an IR absorbent material:

Apparently a 180-nm-thick layer of vanadium dioxide on a sheet of sapphire will absorb almost 100%...

Correct, but likely not helpful, answer. More practical might be this film that you can actually buy...

Although an answer has been selected, I have to weigh in. Don't try to absorb the transmit beam. Instead, cover the exterior of the robot with mirrors angled 10 degrees or so from the vertical. Because you are not using an imaging sensor, the robot will look just like the surrounding walls, since that is what it will be seeing.

The common materials I found that best absorbed IR light are rubbery matte-black substances. Spray-on rubbery substances like Plastidip and Flexidip also worked well. But like pentane's answer explains, even these still reflect quite a lot.

Edit: Although it wasn't exactly what I was looking for, I found that, as far as IR sensors are concerned, most mirrors I tested seem to reflect most IR light. So if the goal is to confuse IR sensors, a mirror positioned at a 45 degree angle is better at effectively "absorbing" light than a matte black finish.

7
What common materials can effectively block infrared radiation?
3
Polar ice caps and thermal radiation
8
Why does glass absorb infrared light?
3
Is it possible to improve the efficacy of light bulbs with a semipermeable mirror? (The greenhouse bulb)
1
Common materials that reflect and absorb near infrared radiation
0
Bubbles (water) are transparent, then how can they produce white light in mass amounts?