Diffraction and Shape in the grating

Suppose, I use a laser with a known wavelength of 650 nm through a "opaque grating" that has a pattern of holes of same shape and size. We can see the pattern on the screen. We know the distance between the screen and the grating material, suppose i.e. D and distance between the spots on the screen i.e d. Now, we know the intensity of each and every spot on the screen. I would like to know if it is possible to determine the shape of the holes in the grating ? Or is it possible to know if we use some technique ?

Small complication: the intensity image no longer contains the phase information which you need to fully reconstruct the aperture. The way you would get around that is by using a lens rather than a screen - because it turns out that a lens (by Abbe's theorem) produces the Fourier transform of the image. Of course this is just saying that if you image an aperture with a lens, you get the image of the aperture...

Some information on the subject can be found at http://www.pages.drexel.edu/~skb25/OEMpresentations/Imaging.pdf

For the particular case you are describing, you have a series of holes of a certain shape. This can be thought of as the convolution of infinitesimal holes with a hole shape; it turns out that the Fourier transform of the convolution of two functions is the product of the Fourier transforms of the two functions. Let's assume you have just two holes a certain distance apart. If they were infinitesimally small, they would create bands of sinusoidally varying intensity on the screen. Now if we make the holes a little wider (square, say) we will see the wave pattern convoluted with a sinc function ($sinc(x) = \frac{\sin x}{x}$). Since the holes are smaller than the spacing between them, the periodicity of the sinc will be slower than the periodicity of the cosine wave, resulting in something like this: 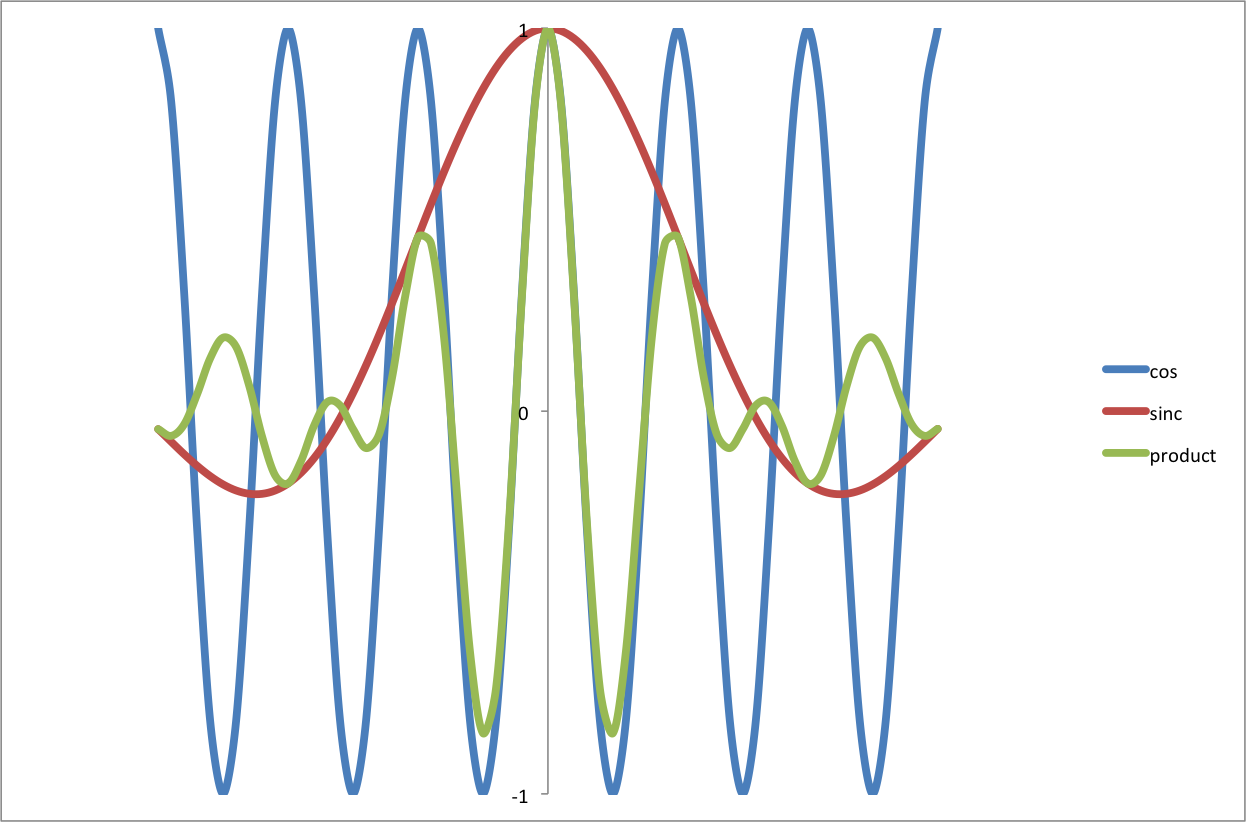 In principle you can do an inverse Fourier transform to recover the information. In practice there are two problems:

Thus, while "deconvolution" is possible mathematically, you do run into some problems in practice.

Incidentally, the whole topic of Fourier optics is fascinating. It can be used to make certain transformations to an image "in real time" without the use of a computer. For example, if you have a rastered image, the rastering gives rise to a certain frequency in the fourier transform: if you create a "stop" in the focal plane of a lens to remove these frequencies, you can literally remove the appearance of rastering. This is discussed in some detail in http://www.uotechnology.edu.iq/dep-laserandoptoelec-eng/laboratory/3/physical%20optics/Fourier%20optics%20%E2%80%93%204f%20arrangement.pdf but your best bet is to google "Fourier Optics" and gorge yourself on the offerings...

Not the answer you're looking for? Browse other questions tagged optics experimental-physics diffraction or ask your own question.