Can one model a spiral galaxy with a similar manifold to one for a whirlpool?

My question is more of a phenomenological question than literal, since the forces involved are very different. When one looks at the distortions (or wrinkles or whatever you wish to call them) in the surface of the water near a whirlpool, the distortions look similar to spiral arms in a spiral galaxy (see image).

In water, these distortions and their spiral shape are due to surface tension. So I am wondering if something analogous applies in spiral galaxies (i.e., surface tension is replaced by space-time and EM forces).

All the galaxies examined so far seem to have supermassive black holes at their center. We know that a rotating black hole can warp space-time and this is often shown in models in a way that looks very similar to the distortions in the whirlpool shown below.

The reason this interests me is that those distortions extend out much further than the $r^{-2}$ contour of the central part of the whirlpool (i.e., where the water flows orthogonal to the average plane of the water surface). I thought perhaps that the gravitational waves produced by a rotating supermassive black hole my produce similar "distortions" (or gravity wells) in space-time that extended to much larger distances than the $r^{-2}$ range typically associated with gravity. In addition, any massive objects that were near these local gravity wells would add to the well's depth in a positive feedback sort of way, similar to the density wave theory and even possibly areas unstable to the Jeans instability. Thus, over time, I figured these gravity wells would evolve into something similar to spiral arms.

(1) Is my idea physically consistent and reasonable?

(2) Could this help explain why galaxies spin faster than expected at large distances from the galactic center? 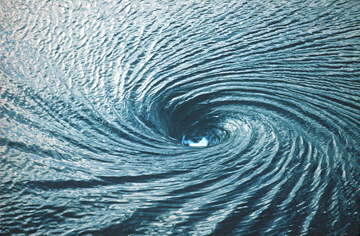 On the scale of galactic spiral arms, the central black hole is gravitationally utterly insignificant. I'll illustrate with an example, NGC 524. Of spiral galaxies (this is technically an S0, but there's still spiral structure) with measured black hole masses, NGC 524 has one of the most massive. Here's a picture of the galaxy: 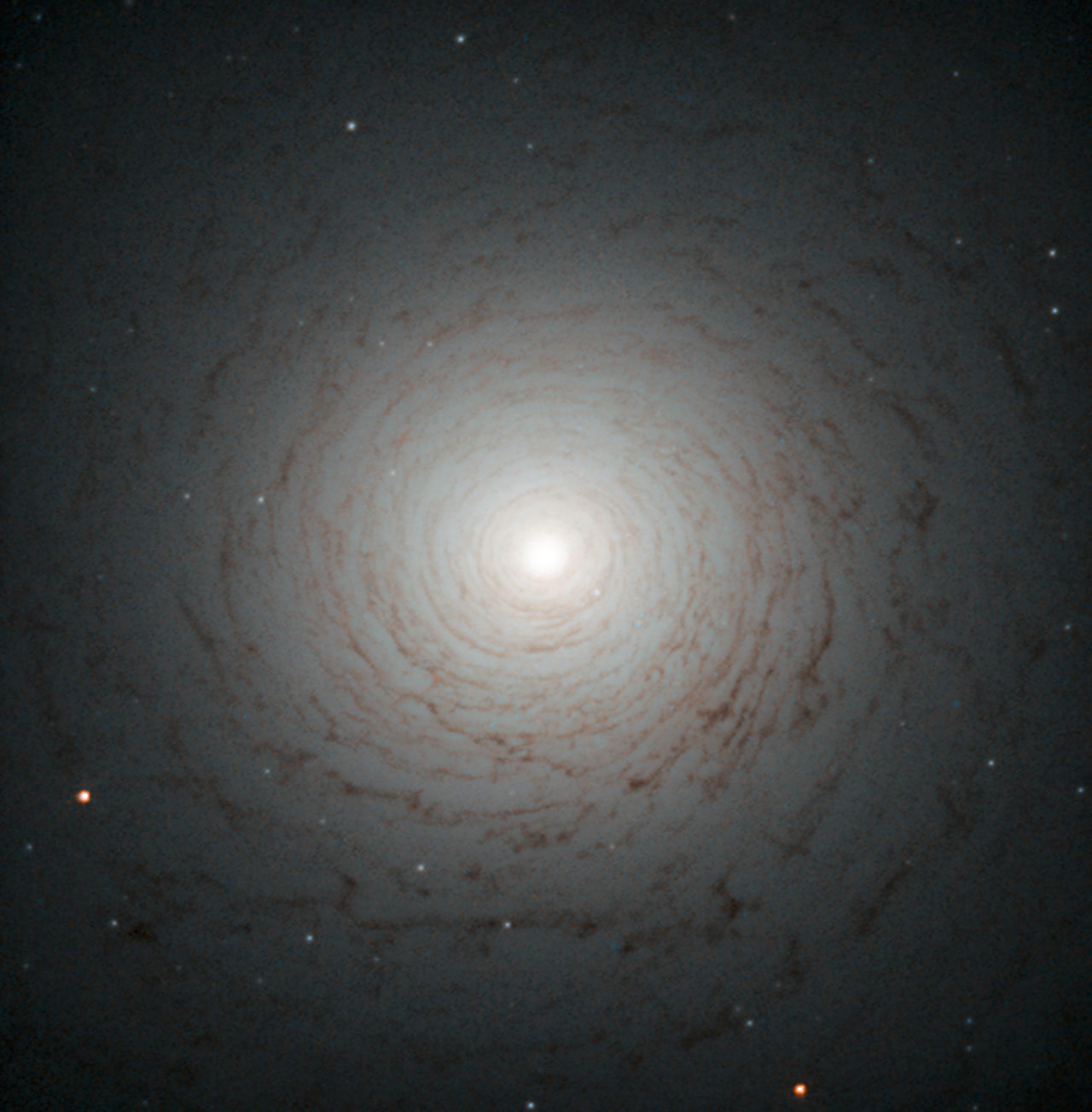 The visible disk has a physical radius of roughly $15\,{\rm kpc}$. It has a black hole mass of about $10^9\,{\rm M}_\odot$, corresponding to a Schwarzschild radius of $10^{-7}\,{\rm kpc}$. The black hole would be a little larger than a millionth of a pixel in this image. But of course size isn't the key parameter, mass is. Based on its B-band absolute magnitude of $-20.7$ and assuming a mass to light ratio of $\sim 5$ (typical for a S0), I get a crude stellar mass estimate of $5\times10^{10}\,{\rm M}_\odot$ for NGC 524. Taking a conservative exponential scale length of $1\,{\rm kpc}$, half the stellar mass should be enclosed within less than $2\,{\rm kpc}$ (about the size of the innermost visible spiral structure on the image). Half the stellar mass outguns the black hole by a factor of $25$, so the black hole doesn't begin to dominate the dynamics until well within this radius. Frame dragging and gravitational radiation effects would, I think, be dominant only at even smaller radii.

This, rather than anything to do with the black hole, is how spiral arms form.

What we see when we look at a spiral galaxy is a very distorted view due to the gravity fields within the galaxy shrinking space and time. What appears to be moving more slowly than it should due to Newtonian Physics is actually moving at the correct Newtonian speed, but it appears to be moving too slowly due to the compressed space-time created by the variable gravity fields throughout the galaxy.

The gravity fields vary in strength throughout the galaxy depending on the distance from the most intense gravitational fields. The black hole at the centre obviously has some great effect close to it but further out in the star clusters local gravity has a greater effect. That combined with overall gravitational influence of the whole galaxy (including the black hole) affects the warping and shrinking of space time and makes individual stars appear to be moving at the wrong speeds from our distant viewpoint.

It appears that the stars on the outer spiral arms are moving too fast for us. To explain this we must first accept that the whole galaxy is much larger to the mass within it than it looks to us due to the gradational shrinking of space-time. Every star is moving at the correct Newtonian speed according to its own space-time. And of course that space time will vary according to different gravitational shrinking in different locations. There is no need to add additional mass in the form of dark matter.

Consider this crude analogy. At the top of Mount Everest you weigh less than you do at sea level because you are further away from the earths overall mass. Now imagine you dig a hole to the centre of the earth. As you go down the mass above you increases and the mass below decreases. Every kilometre you go down you weigh less on the scales. Until when you reach the centre you weigh exactly zero. But of course the earth does not have a black hole at its centre to fully compare to a spiral galaxy.

Not the answer you're looking for? Browse other questions tagged gravity fluid-dynamics black-holes galaxies vortex or ask your own question.

25
How do spiral arms form?
1
Galactic Rotation Speeds - Ehrenfest Paradox, Gravitational time dilation, Dark Matter - all of the above?
2
Could galactic rotation be similar to an irrotational vortex?
1
Could black hole mergers be the source of density waves that show up as galaxies' spiral arms?

16
How can a singularity in a black hole rotate if it's just a point?
15
Why don't the black holes appear black in color in images of galaxies taken from HST?
6
How can a black hole zap a galaxy into existence?
1
How to calculate the strength ("space force") of dark matter within galaxies?