How do spiral arms form?

Why aren't all spinning galaxies shaped as discs as my young mind would expect? I understand how the innermost parts of a galaxy spin faster than the outer parts, and that could explain why some galaxies are more spiraled than others based on age. Though, this doesn't explain how the arms came into existence in the first place. Might it have something to do with an imperfect distribution of mass, and therefore an imperfect distribution of gravity, causing a split in the disc from which point gravity, centripetal force, and inertia could take over? Or does something happen earlier in a galaxy's life?

There are several theories on how they form like Density Waves and stochastic self-propagating star formation (SSPSF).

But you're interested in how they start. Current debate about the arms have two main points: One holds that the arms come and go over time and a second and widely held theory is that the material that makes up the arms - stars, gas and dust - is affected by differences in gravity and sustains the arms for long periods.

There are a few outstanding theories including the one you suggest in your question:

To the first idea a recent massive computer simulation study found, "Using high-resolution N-body simulations, we follow the motions of stars under the influence of gravity, and show that mass concentrations with properties similar to those of giant molecular clouds can induce the development of spiral arms through a process termed swing amplification. However, unlike in earlier work, we demonstrate that the eventual response of the disk can be highly non-linear, significantly modifying the formation and longevity of the resulting patterns. Contrary to expectations, ragged spiral structures can thus survive at least in a statistical sense long after the original perturbing influence has been removed." And they have some animations and examples.

Shown here is an example snap shot of the evolution of their complex model. 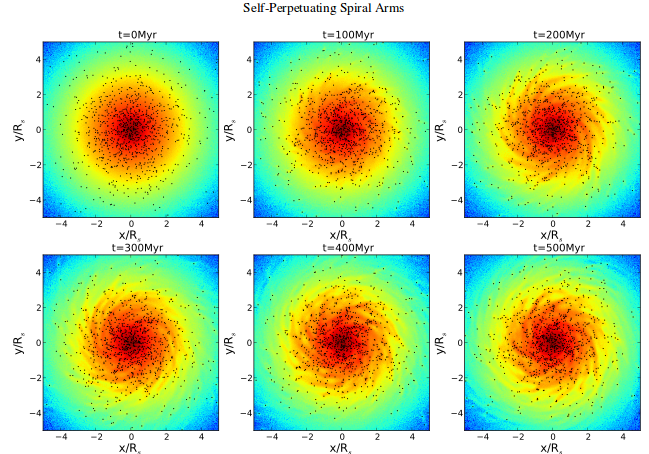 To the second idea of external influences here's an example simulation showing the influence of a nearby galaxy causing the imbalance which triggers arm formation. I think this is pretty intuitive to imagine and the simulation demonstrates the mechanism as well.

Due to the wide variety of galactic shapes for spiral galaxies there could be a combination of these effects or additional processes not well understood now due to our very short time of observing galactic scale events.

user6972's answer is great, but I thought I'd add a somewhat more technical footnote. If the mathematics are lost on you, skip to the end where I give a simple physical interpretation.

The dispersion relation for a differentially rotating fluid disk (i.e. the rotation frequency changes with radius, as opposed to a uniformly rotating disk) is:

This may be a bit intimidating, but as I'll show in a minute it has a nice simple physical interpretation.

First though, a couple words on the assumptions that go into that dispersion relation (the full derivation is in Binney & Tremaine's Galactic Dynamics 2$^\mathrm{nd}$ Edition... it's quite involved so I won't try and outline it here).

So, are these approximations reasonable? Checking typical disk galaxies it turns out that they are (as long as we're not talking about colliding galaxies or anything like that, which would lead to large perturbations). Besides, the idea with this analysis is not to get a nice clean result showing the theory of spiral arm formation, but rather convince ourselves that a disk is naturally unstable under certain conditions and will "want" to form spiral arms (and gain insight into what drives the instability), and we can check later that they do in fact form with simulations such as those mentioned by user6972.

Ok so with a dispersion relation based on some reasonable assumptions, we can do the usual stability analysis, requiring $\omega^2>0$ for stability. This gives:

The analysis for a disk made of stars instead of a fluid disk (in reality a galaxy is a disk composed of a mixture of stars and gas) is very similar but with a couple of extra gory details... the result is nice, though:

where $\sigma_R$ is the radial velocity dispersion of the stars in the disk; this is a measure of the distribution of radial velocities and can be thought of somewhat like a sound speed, in a certain sense it carries information about how fast the stars react to carry an impulse. This is a reasonably famous result called "Toomre's stability criterion".

Ok so now for the simple physical interpretation of the stability criteria. First, I should point out that $v_s$ (sound speed), $\sigma_R$ (velocity dispersion) and $\kappa$ (epicyclic frequency) are all similar quantities; they describe the ability of a system to respond to a disturbance. If I poke one side of a cloud of gas, the other side only finds out about it through pressure as fast as the speed of sound (or velocity dispersion/epicyclic frequency) can carry the message.

Now imagine I have a rotating disk of gas with nice smooth properties and I squeeze a little piece of gas (or group of stars) a bit. Two things happen - the squeezed piece of gas will "push back" outwards since I've increased the pressure, but I've also caused a slight increase in density, which will exert a bit of extra gravitational force. It turns out the gravitational force is proportional to $G\Sigma$, and the pressure force is proportional to $v_s\kappa$ (or $\sigma_R\kappa$). The same argument applies in reverse if I stretch the gas/stars a bit - the pressure drops, but so does the gravitational force. So the interpretation of the stability criteria above is that if, when I squeeze a bit of gas (or stars) a little bit, if the increase in pressure is sufficient to balance the increase in gravity, the gas will un-squeeze itself; it is stable. On the other hand, if gravity wins out against pressure, the disk is unstable and collapses locally.

Ok, so how does this lead to spiral arms? Well, you can show that spirals are a natural structure to form under this sort of instability with the parameters of a typical galaxy (depending on the details, a bar is also a possibility). It's a lot of work, though, and I'm not sure it brings a lot more insight - at this point, in my opinion, it's time to switch to simulations and see that yes, indeed, spirals seem to form because of this instability.

Not the answer you're looking for? Browse other questions tagged gravity newtonian-gravity astrophysics galaxies or ask your own question.

11
Shapes of galaxies
21
How can a spiral galaxy exist?
4
Why the center of our galaxy doesn't absorb us?
1
Is there a binary black hole system in the middle of the galaxy?
4
How dark matter makes ordinary matter far from the center of a disc galaxy rotate faster?
3
Did dark matter cause the formation of the Solar System?
3
How do bars in barred spiral galaxies form?
2
Do the arms of a spiral galaxy spin around like a candy bar in long spirals?
0
Can one model a spiral galaxy with a similar manifold to one for a whirlpool?

0
Can one model a spiral galaxy with a similar manifold to one for a whirlpool?
1
Galactic Rotation Speeds - Ehrenfest Paradox, Gravitational time dilation, Dark Matter - all of the above?
5
Current constraints on Dark Matter self-interaction from galactic profiles
6
How Much Do Spiral Arms Affect Their Galaxies' Rotation Curves?
0
Cause of observed galactic red shift or acceleration in expansion of the universe: velocity vs gravity.