Why are these periods the same: a low earth orbit and oscillations through the center of the earth?

Related: Why does earth have a minimum orbital period?

I was learning about GPS satellite orbits and came across that Low Earth Orbits (LEO) have a period of about 88 minutes at an altitude of 160 km. When I took a mechanics course a couple of years ago, we were assigned a problem that assumed that if one could drill a hole through the middle of the Earth and then drop an object into it, what would your period of oscillation be? It just happens to be a number that I remembered and it was 84.5 minutes (see Hyperphysics). So if I fine-tuned the LEO orbit to a vanishing altitude, in theory, I could get its period to be 84.5 minutes as well. Of course, I am ignoring air drag.

My question is: why are these two periods (oscillating through the earth and a zero altitude LEO) the same? I am sure that there is some fundamental physical reason that I am missing here. Help.

What you have now are two objects oscillating in just one dimension, but they do so in quadrature. That is, if we were to plot the altitude of each object, one would be something like $\sin(t)$ and the other would be $\cos(t)$.

Now consider the motion of a circular orbit, but think about the left-right movement and the up-down movement separately. You will see it is doing the same thing as your two objects falling through the center of the Earth, but it is doing them simultaneously.

caveat: an important assumption here is an Earth of uniform density and perfect spherical symmetry, and a frictionless orbit right at the surface. Of course all those things are significant deviations from reality.

Let's consider just the vertical acceleration of two points, one inside the planet and another on the surface, at equal vertical distance ($h$) from the planet's center: 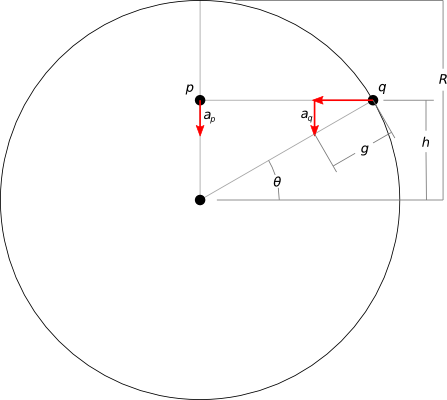 Calculating $a_q$ is simple trigonometry. It's at the surface, so the magnitude of its acceleration must be $g$. Just the vertical component is simply:

If you have worked through the "dropping an object through a tunnel in Earth" problem, then you already know that in the case of $p$, its acceleration linearly decreases with its distance from the center of the planet (this is why the "uniform density" assumption is important):

$h$ is equal for our two points, and finding it is again simple trigonometry:

This also gives some insight to an unfortunate consequence: this method can be applied only to orbits on or inside the surface of the planet. Outside of the planet, $p$ no longer experiences an acceleration proportional to the distance from the center of mass ($a_p \propto h$), but instead proportional to the inverse square of distance ($a_p \propto 1/h^2$), according to Newton's law of universal gravitation.

Phil's answer, while beautifully illustrated, is a little incomplete. It relies on the fact that in the case of the tunnel you're solving the one dimensional projection of the low earth orbit satellite, but doesn't prove this. I do this below. The force applied on the object, for a sphere of uniform density, is actually :

Where $k = \frac{mg}{R_{earth}}$. This is equivalent to a spring problem, whose solution will indeed be sinusoidal with period $2 \pi \sqrt{\frac{R_{earth}}{g}}$, the same as a low earth orbit period. Again, while Phil's answer does provide an illustration of this, it doesn't actually prove it. In particular, it leaves out the crucial fact that this only holds for a sphere of uniform density.

An alternate explanation (which really is the same as the answer from @Phil): as per Kepler's laws, an orbit is an ellipse, and the orbiting period is proportional to the semi-major axis of the ellipse.

A satellite in the lowest orbit will try to follow a special kind of ellipse (namely, a circle), whose semi-major axis is really the Earth radius (this is the "lowest orbit" because the satellite grazes the ground -- we ignore the atmosphere here).

The oscillation in the hole is really another orbit -- it is a degenerate ellipse which has been flattened to a line. Yet its semi-major axis is still the Earth radius.

Edit: as was pointed out, that expanation is bogus in two ways:

While it is understandable that the low orbit and the ocsillator end up with periods of the same magnitude (they both are kinds of "free fall" against an Earth with the same weight, and starting at ground level), that hand-waving remark would have been equally applicable with an oscillator period being twice or half that of the low orbit. They seem to end up quite close to each other and I now have no idea whether this is mere coincidence or for some fundamental reason.

My question is: why are these two periods (oscillating through the earth and a LEO) the same? I am sure that there is some fundamental physical reason that I am missing here. Help.

It's a result of the (flawed) assumption of a uniform density Earth. The Earth is anything but a constant density object. The Earth's core is five times more dense than surface rock. Gravitational acceleration reaches a maximum of over 10 m/s2 at the core-mantle boundary, which is a bit less than halfway to the center of the Earth. A uniform density model implies that gravitational acceleration is about half the surface value at this depth.

An even better model is to use numerical integration with the Preliminary Reference Earth Model (A. Dziewonski and D. Anderson (1981), "Preliminary reference Earth model," Physics of the earth and planetary interiors 25:4, 297-356. (tabular data at http://geophysics.ou.edu/solid_earth/prem.html)). This yields a period of 76.38 minutes, which is very close to the simple model described above.

Phil Frost's argument in his answer (v4) is correct. Assuming a spherical Earth with constant density $\rho$ (and assuming for simplicity that the object for some reason can move freely$^1$ through Earth so that there is no air drag, and so that we can skip all the tunnel drilling and not worry about that the Earth's rotation could press the object up against the tunnel wall; and assuming that we use Earth-Centered Inertial (ECI) coordinate system, so that there are no fictitious forces; etc), then the governing 3D vector-valued ODE (derived from Newton's laws) is

This ODE (1) separates in three independent SHOs for the $x$, $y$ and $z$ coordinates with common characteristic period

In particular, for an arbitrary trajectory with $|{\bf r}|\leq R$ (= radius of spherical Earth), the period is independent of initial position and initial velocity.

1
Time required to traverse a tunnel through the centre of a planet
3
Why does earth have a minimum orbital period?
5
If a stationary ball of neutrinos were released at the equator, what orbit would it take?

2
What are the temperatures of objects in Low Earth Orbit (LEO)?
9
Orbit through L4 and L5
1
If Earth and Jupiter are orbiting around Sun in same orbit, will they have same time period?
0
Drag in low earth orbit
7
What are the forces behind the orbit of the Earth around the Sun?
0
Relation of speeds of Earth at extremities of orbit through force
0
Can the Sun orbit the Earth?