What is the cause of centripetal/centrifugal force?

This force is equivalent to a force experienced while stopping a mass in motion (Inertia). But is this inertia caused by some force? or what causes inertia? A photon particle does not have inertia of rest.

When an object rotates uniformly in a circular orbit it doesn't experience any force(real or/and pseudo) radially outward. What it experience is the centripetal force which is always radially inward as measured from the co-ordinate system in which it rotates and is given by
$F={\dfrac{mv^2}{r}}$ where $m$ is the mass of that object, $v$ is the tangential instantaneous speed and $r$ is the radius of the circle in which it is rotating.
See this picture to visualize this: 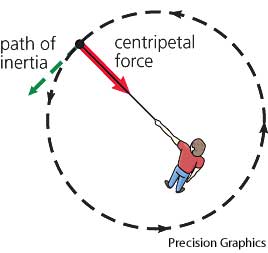 To deviate the motion of an object from straight to circular we have to apply a force radially inward because due to inertia the object tends to move in a straight line. The force we apply changes velocity of that object by changing the direction of motion.

It should be noted if the force is calculated from some non-inertial frame of reference then we will have to add a pseudo force on that object but the motion will not remain circular in this non-inertial frame.

Rotating a rock tied on a string? Centripetal force = tension in the string

Anupam has very well answered, I'll just add my modest contribution with a simple example: the inertial frame could be the Earth and the non-inertial frame a car moving in a circle. In that case the centripetal force is the reaction of the tyres on the ground due to their grip, but the most interesting thing about this case is that objects in the car seem to be pushed outward. In reality (meaning, in an inertial frame, which the Earth can be considered for a short duration) they simply tend to continue in a straight line: this force, the centrifugal force, is only fictitious and is due to the fact that the lines that solids tend to go along in inertial frames might not be lines in a non-inertial frame (viewpoint problem). The car itself experiences the centrifugal force because after all it is yet just another thing bound in a non rigid way (i.e. suspensions) to the tyres which propagate the centripetal force. This is why they can topple at great speeds (higher centrifugal force).

I don't want to copy-paste. There is a nice answer given in the following link, probably useful https://www.reddit.com/r/askscience/comments/2o33mu/if_centrifugal_and_centripetal_forces_arent_real/

Not the answer you're looking for? Browse other questions tagged newtonian-mechanics reference-frames rotation centrifugal-force centripetal-force or ask your own question.