Why doesn't a rotating object feel the centrifugal force in the tangential direction?

Consider a slingshot in two reference frames :
1) The ball (rotating)
2) Me (inertial)

In my frame, tension acts as centripetal force necessary for the circular motion, and I see the inertia makes the ball fly away tangentially as soon as I release it.

I somehow don't feel an intuition for why the centrifugal force acts radially outward in the ball frame. Appreciate any help in clearing this up. Thanks!

Firstly, it is important to know that centifugal force is not a real force, it is only an apparant force. The centrfugal force is really just how a rotating object feels the centripetal force.

Imagine you are on one of those spin-rides like the Gravitron where you sit up against the wall as it spins. You will feel a centrifugal force, but an observer from the outside will only see the centripetal force. 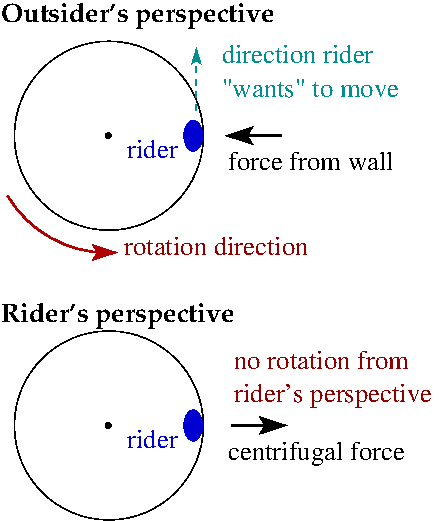 Newtons first law (aka law of inertia) says an object in motion wants to stay in that motion. At any instance on the ride, you are moving in a straight line tangential to the circular path. But the walls then provide the centripetal force that pushes you back in. So what you are feeling is your body literally running into a wall via your linear velocity. If the wall pushes on you, newtons third law says you will feel yourself push on the wall.

Now back to the string and ball example, we can see that the centrifugal force is actually just a product of newtons third law of motion - every action has an opposite and equal reaction. While the ball is in motion, your hand has to provide a force(in this case the centripetal force) on the string to keep the ball in its circular path. Consequently, the string must then pull on your hand equally and oppositely. That is the centrifugal force your hand feels. As for the ball, it keeps trying to go linearly but gets pulled in. If you yourself replaced the ball and was spun about, your body would want to keep moving in a straight line (bc of its inertia) but you kept being pulled inwardly instead. As you are spun, the rope pulls on you and so you must then pull on the rope. Thus, it will feel like your body is trying to fly outward.

The moment you let go, the centripetal foce and its apparent centifugal force is gone and the ball continues moving in the direction of its linear velocity at that moment.

I've got an intuition that works for me, hopefully it works for you too. Below I've shown the how the force (blue) and velocity (green) change as the ball moves around the circle. (Imagine it is attached to a string, drawing it just complicated the diagram).

On the right we can see how the direction of velocity changes as we go round. Now you know a change in velocity requires an acceleration - the acceleration we have is caused by our tension in the string.

Centrifugal force is the opposition to this change in velocity which we would see if the force isn't all transferred to the ball. Imagine a ball with the string running through a hole in the center and a knot at the end of the string (like below). 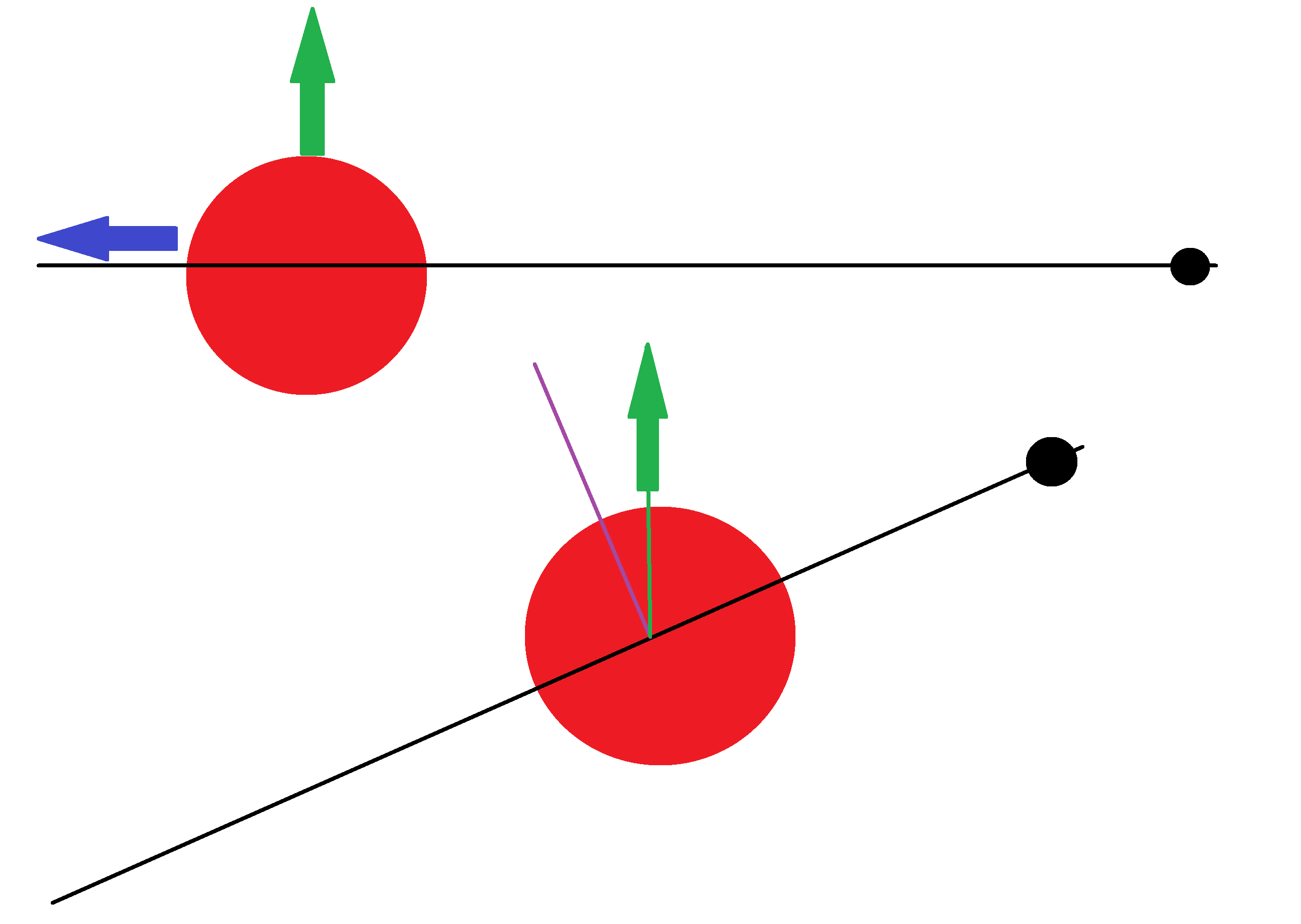 Now our green arrow is still the velocity, the blue one represents the acceleration we would need for constant radius, however we could imagine the string is smooth and the ball won't feel the entire radial force of the tension in the string. In the bottom picture we see the ball having moved along the string, retaining some of its original direction of motion (call it $\vec{v_{o}}$). The purple line represents the velocity we would expect for circular motion (call it $\vec{v_{c}}$).

So an observer in the rotating frame sees the ball move outwards from $\vec{v_{c}}$ to $\vec{v_{o}}$ and the centrifugal force is this observed acceleration applied to the ball.

Now, the centrifugal force is only present in the frame that is rotating along with the ball (while in the inertial frame only the centripetal force is present). It feels like gravitation, which grows proportionally to $r$, the length of the string, because $v^2={\omega}^2 r^2$, and thus this "gravitational" force is $F=\frac{mv^2}r=m{\omega}^2r$, where $\omega$ is the angular velocity. If $\omega$ (at constant $r$) increases, the rotation speed of the co-rotating frame increases (and thus accelerates) proportionally to $\omega$ while the artificial gravitation would increase proportionally to ${\omega}^2$. So someone connected to the ball (in a cylindrical symmetric room so he or she can't see the rotation) feels an increasing force pulling him or her away from the center if $\omega$ increases, which happens as a tangent force (which, like I wrote before, you can't call a tangential centrifugal force actually, because it's not "fugal") is present which can only be provided by a force on the string from where it gets its rotation. In addition to an increasing outward force, the person on the ball feels a "gravitational" force caused by the tangential acceleration of the ball wich is directed in the opposite direction of the ball's velocity (like a person in an accelerating lift feels a force in the opposite direction of the lift's velocity).

The centrifugal force is not real. It is a pseudo-force.

For all this to make sense it's important that Newton's three laws of motion are assumed to be true, in the sense that a force and space (and a straight line) and time is defined the same way in both frames.

Imagine you were in the rotating frame (like a carousel) with everything enclosed within it rotating at the same rate. There is no way of proving that another person resting on the frame of the carousel is not at rest in a straight line. Remember, they can't see what is outside the carousel. Assuming this, you would 'observe' other peculiar phenomenon that are not needed in the inertial frame.

To show this, you could draw an arbitrary point on the frame of the carousel with a marker and call that your reference point. Since the frame is taken to be a rest in a straight line, the point is not accelerating. Yet any object in free fall on the carousel accelerates relative to that point. It just so happens that the acceleration points directly away from the centre of the carousel. Any object that is at rest must therefore be acted upon by some other reaction force towards the centre (another arbitrary point), with equal magnitude. (This force is what is observed as centripetal in the inertial frame)

What is the magnitude of that force? Well, to the people stuck inside the carousel, there's no way to tell that it depends on the angular velocity because they do not know that they are spinning. They can only find that the force is proportional to mass because acceleration doesn't change, and proportional to $r$ by experiment and deduction.

Why can't the people in the rotating frame just assume they are rotating? Well, they can and it would make their physics simpler (fewer unexplained laws). The problem is, they have no way of knowing which is right unless they observe what happens once they break the perpetual circular motion.

Not the answer you're looking for? Browse other questions tagged centripetal-force centrifugal-force or ask your own question.