Electric field intensity in a dielectric inside a capacitor

A parallel plate capacitor is charged from a cell and then isolated from it. A dielectric slab of dielectric constant $K$ is now introduced in the left half region between the plates as shown in $\rm figure~ II$. The electric intensity in the dielectric is $E_1$ and that in the air (right half) is $E_2$. Relation between $E_1$ and $ E_2$ is 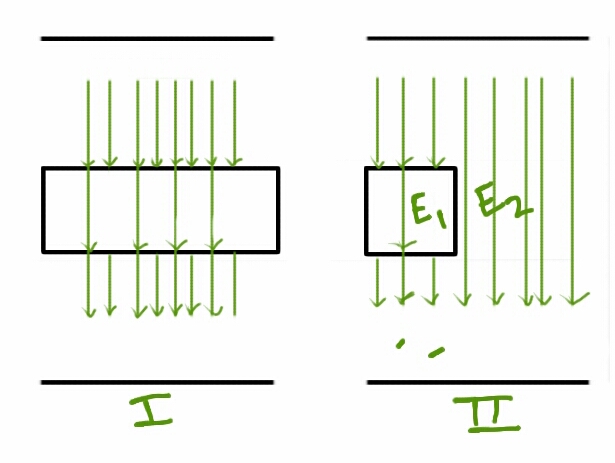 The electric field lines are drawn by me and the weird lines in the lower region of figure II are accidental.

As far as I have read in capacitors the number of electric field lines decreases when passing through a dielectric due to the opposition offered, as I have shown in figure I.

So I used the same concept to draw electric field lines in Figure II. By which I can assume that $E_1$ is less than $E_2$.

But my book says that

with a reason that

Where am I wrong?

I edited the question as above because an upside down diagram helps me understand it better.

There are two contributions to the electric field in a dielectric:

A simplifying assumption that holds true in many cases of practical relevance is that of linear response. The polarization is taken to be proportional to the field $$ P =\epsilon_0 \chi E$$ $\chi$ is called the electric susceptibility.

The voltage between two points is generally given by integrating the electric field on a path between those two points. In order to not burden the discussion with to much math let's just point out that in the setting of a plate capacitor the voltage between the two plates at distance $d$ is simply $$ V= -E\cdot d = -\frac{E_0}{\kappa}d$$ This demonstrates that the voltage between the plates is not oblivious to the presence of the dielectric. Imagine placing a test-charge in the capacitor. Without a dielectric the charge will move due to $E_0$. The energy gained (divided by the charge) is by definition the voltage crossed. In the presence of a dielectric, the field $E_0$ is partially canceled, therefor a test-charge will gain less energy, i.e the voltage is lower.

Now, how does that lead to the answer in your book? Two things:

You now have two regions of different potential on each plate. But that cannot be maintained in a conductor. Charges on each plate will redistribute in such a fashion that the potential of each plate becomes constant, say $V_1=V_2$. The charges are not distributed evenly on the plates anymore!

As the electric field is simply $E_{1,2}=-V_{1,2}/d$ it is indeed the same within and outside the dielectric. What changes is $E_0$, since it is generated by the charges on the plates only, which have redistributed.

Note: One usually does not consider $E_0$ but $D = \epsilon_0 E_0$ called the electric displacement field.

Suppose on the other hand the field in the two places were not equal.

Consider a loop integral around the red loop in say anticlockwise direction as shown in the figure. 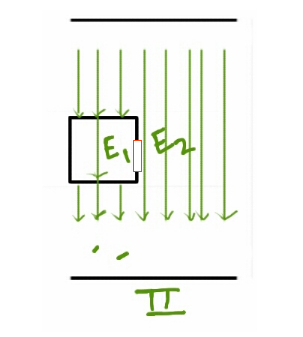 Only the vertical edges contribute to the integral.If $E_1 \neq E_2$,it is obvious that the loop integral is non-zero.This violates the conservative nature of the $\vec{E}$ field in electrostatics.

In fact,the result is quite general in the sense that across a dielectric boundary,we can show that the tangential component of the $\vec{E}$ field is continuous.

I'll give you a simple answer.

When you consider the capacitor as two parallel plate capacitors connected in parallel, you will see that their potential differences must be same. But not their charge. The charges on the two capacitors will be different.

To find the charge on each capacitor, you will use the fact the potential difference of 2 capacitors is same. You might want to do that quantitatively to satisfy yourself.

Not the answer you're looking for? Browse other questions tagged homework-and-exercises electrostatics capacitance dielectric or ask your own question.

3
Direction of electric field at points on boundary between two dieletrics
3
Parallel plates capacitor, boundary conditions (paradox?)
0
Why do two approaches to this capacitors problem give two answers?
0
Electric field component in a capacitor with dielectrics inserted partially