In considering a delta potential barrier in an infinite well, I can just enforce continuity at the potential barrier-it doesn't have to go to zero. Why then does it need to go to zero at the walls of the infinite well? These two cases seem to be very similar to be, I even feel like the well wall is equivalent to a summation of delta functions... Where is my logic faulty?

One may view both (i) the infinite wall

and (ii) the delta function potential

as an appropriate limit of a finite barrier wall

(i) On one hand, for an infinitely thick wall $a=\infty$, the exponentially growing solution is physically unacceptable, and hence discarded, such that $\psi(\infty)=0$. Thus we learn that the wave function is exponentially decaying when entering the potential wall at $x=0$. The inverse characteristic penetration depth is proportional to $\sqrt{V_0-E}$. Thus in the limit $V_0\to \infty$, the characteristic penetration depth is zero, i.e. we get the sought-for boundary condition $\psi(x=0)=0$, if we assume that the wave function is continuous$^1$.

(ii) On the other hand, for a wall of finite thickness $a<\infty$, the exponentially growing solution may also be relevant, and $\psi(x=0)=0$ does not have to be satisfied.

$^1$ Continuity of the wave function $\psi$ can be justified for a wide class of potentials $V$ via a bootstrap argument on the TISE in integral form. See also e.g. my Phys.SE answer here.

The infinite potential well is an idealization in which we imagine that, as Kyle Kanos has already said in his answer, we are completely confining the particle to an interval $(-a,a)$ on the real line. Since the squared modulus $|\psi(x)|^2$ of the wavefunction at a point $x$ on the real axis represents the probability (density) for finding the particle at a given position $x$, a particle that is confined to the region $(-a,a)$ must have zero probability of being found in that region, so we impose the boundary condition $|\psi(x)|^2 = 0$ for all $x\geq a$ and for all $x\leq-a$ which implies that $\psi(x) = 0$ for all these values of $x$.

So far, this is essentially just a restatement of what Kyle has already said, but let's dig a bit further to understand what's going on physically.

You might think to yourself "ok, given the idealization described above of confinement of the particle, the boundary conditions make intuitive sense, but in the real world, there is no such thing as an infinite potential. We can, however, produce very large potentials in the real world. I would be more convinced of the infinite square well boundary conditions if we could show that given a finite potential well of strength $V_0$, the behavior of the wavefunction in the regions of high potential get's closer and closer to that of its behavior for the infinite potential well as $V_0$ is taken larger and larger.

In fact, we can show that this is the case for the energy eigenvectors of the finite potential well.

Notice, also, that from this point of view, a pair of delta functions is not equivalent to the infinite square well because that would correspond to an infinite limit of a pair of finite potential spikes at the positions $\pm a$, and that is simply not the physical situation we are attempting to model when we discuss the potential well.

When you consider a potential barrier, you will see that the wave function of a particle with definite energy will decay exponentially at a rate that depends on the difference of the potential and the energy. Precisely, the exponent is proportional to $\sqrt{V - E}$.

A delta function doesn't exist as a function, but it is a limit of functions (in a suitable topology). For this problem it is easiest to consider block functions: functions of width w and height 1/w. The delta distribution is the limit as $w\to 0$. You can not first take the limit of the height going to infinity, followed by the width going to 0, something that you implicitly are doing.

Now for a fixed $w$ you get a value for the wavefunction on the other side of the barrier depending on the value on this side. When the height goes up, the decay will be faster, but it will also fall over a shorter interval, and in fact the decay will be less because the decay exponent contains a square root. In the limit there is no decay in height at all, in particular you do have continuity, but no reason to end at 0.

You are confining the particle into a region of $|x|< a$ with an infinite potential that extends infinitely far for $|x|\geq a$: 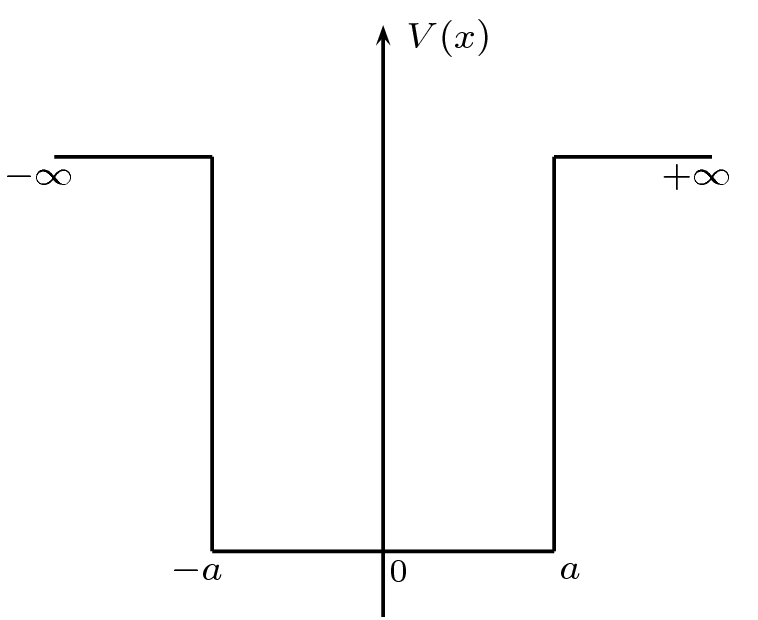 Why then does it need to go to zero at the walls of the infinite well?

Due to the requirement of normalizability of $\psi$, in the case of finite well, the $\psi$ function decays to zero for large $x$, and the limiting procedure leads to continuous $\psi$ even in the limit and to boundary condition where $\psi$ is zero outside the well

I even feel like the well wall is equivalent to a summation of delta functions...

True, the constant potential $V_0$ outside the finite well can be written as

0
Electron in an infinite potential well
3
Inconsistency in the delta potential
2
Normalizing a wave function in a mixed well
1
Why is the wave function inside a delta potential non-zero?
1
When solving the Schrodinger equation, how do we know what functions to use (exponential and sine or cosine) for the solution (wavefunction)?
5
Infinite square well: wall with infinitesimal thickness
0
Changing widths of potential wells