The situation: we have Earth, a star and an exoplanet, all in one line. The star is between the Earth and the exoplanet and 1 light year away from each.

Which means that from Mike's perspective, Mark closes in on the star with 0.3c. So in order form Mark and Mike to arrive at the star at the same time, Mike has to leave later than Mark. Call the time Mike waits t1, and the time he takes to get to the star t2. Note that during t1, Mark closes in on the star with 0.5c (since the star is standing still), and during t2, with only 0.3c. Also, during t1, Mike perceives the distance between Mark and the star to be 1 (no length contraction yet).

Therefore, the distance between Mark and the star after t1 has passed equals 1 - 0.5 * t1 light years. And this remaining distance, length contracted, must be equal to 0.3 * t2:

t2 is also simply the time it takes Mike to get to the star:

In complete agreement with John!

But how much has John aged, according to Mike?

During t1, John was stationary according to Mike and therefore aged t1. During t2 + t2, John was moving at 0.5c, so aged

So in total, John aged

from Mike's perspective?! That can't be correct. The thing is, no matter how I do the calculations, I come out at 3.8 years. Where are those 0.2 years I am missing?

At the same time, Mike gets in his spaceship and also moves to the star at 0.5c, such that Mark and Mike come at the star simultaneously.

As is often the case, the problem is made easier through the use of a spacetime diagram. 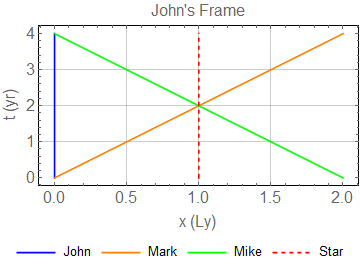 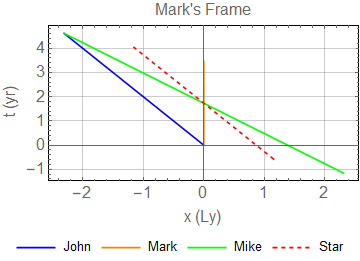 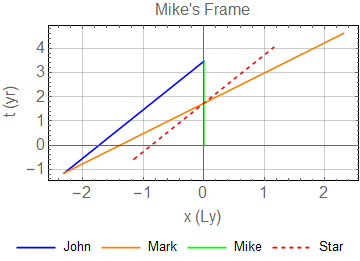 I suspect the problem enters into your analysis when you talk about the various observers waiting before they start to move. This implies that they are not inertial - their worldlines will not be straight. Instead, they will have little "kinks" in them which occur in different places depending on whose frame you're in. Put differently, "Mike's perspective" therefore cannot be encapsulated in a single (inertial) frame (or spacetime diagram).

This question already has an excellent answer, but I figured I'd post my own corrected calculations too.

My main mistake (as pointed out by J. Murray in the accepted answer) is having Mike wait from his perspective. That makes his trip nonlinear.

If we assume both Mark and Mike were already in motion and arrive at the star simultaneously from both John's and Mike's perspective, we can see that from Mike's perspective, Mark takes more time to arrive at the star than Mike does. That's because Mark's speed is 0.8c, and the star's speed is 0.5c (according to Mike). Therefore the star closes in on Mike with 0.5c, but Mark closes in on the star with 0.8c - 0.5c = 0.3c.

2
twin paradox question
1
Astronaut travels 16 lightyears and ages 15 years - am I misreading this question?
1
Twin paradox synchronization
0
On The Twin Paradox The Symmetry Remains
1
Confusion about twin paradox
1
What if the Twin Paradox use the "day time" and "night time" on earth as their age reference?
0
Simple resolution to the twin paradox?
5
In the twin paradox or twins paradox what do the clocks of the twin and the distant star he visits show when he's at the star?
0
How to explain this seeming paradox in how the Lorentz contraction, time desychronization, and time dilation fit together?