How to explain this seeming paradox in how the Lorentz contraction, time desychronization, and time dilation fit together?

This is the paradox. In the rocket frame how does the star clock get from just under ten years to just over ten years during just 5.16 light days of highly time-dilated running?

If there are calculations that can disprove my intuitions, I would be glad to see them.

Edit: I don't know how I got 0.69 hours. That might not be right. Maybe it's a back of an envelope calculation gone wrong.

This question is related to your view that clocks 'jump' in the twin paradox- which is a misunderstanding. Observers on the rocket and the Earth disagree about when the star begins its journey.

Consider this analogy. You and I are are timing how long it takes for a climber to scale a distant mountain, the base of which is ill defined. We each look at the climber with a telescope that has a spirit level attached, so that when we see the climber in the centre of our telescopes in the horizontal position (ie level with us), we can take that as the start of the climb. If your spirit level is not adjusted in the same way as mine, so that your telescope points slightly upwards while mine is truly level, you will decide that the climber started the ascent later than I did, and therefore that the climb to the top took less time. There is no paradox here, it is just that you took the start of the climb to be one point, while I took it to be another lower down.

There is a star ten light years from earth, and at rest with respect to the earth. A rocket is passing the earth at 0.999999c. The clocks on the earth, star, and rocket all display "zero" at this time.

This is where the problem is. Since the rocket is moving with respect to the Earth and star, what is meant by "this time" depends on which reference frame you're talking about, as seen in the spacetime diagram below. 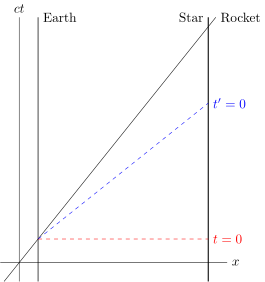 The red dashed line shows what it considered simultaneous in the Earth-star frame, while the blue line shows what is seen as simultaneous in the rocket frame. The reason why you calculated the time measured on the star to be less, when looking at the rocket frame is because you're starting the clock later, in that case. In other words, you're not measuring the same thing, thus causing the alleged "paradox."

In your edit, you said

This is incorrect. The time measured on the star clock is the proper time (a Lorentz invariant quantity) of the star's trajectory, which does not depend on reference frame. The proper time is given by $\tau^2=\Delta t^2-\left(\frac{\Delta x}{c}\right)^2$. Assuming that the star clock starts where the red $t=0$ line intersects with the star's worldline, then it will read a little over 10 years when the rocket reaches the star, regardless of the frame in which you calculate this.

Here is the picture you should have drawn (with the earth frame in black, the rocket frame in blue, and the star in red). (This is Sandejo's picture with a bit more detail.) 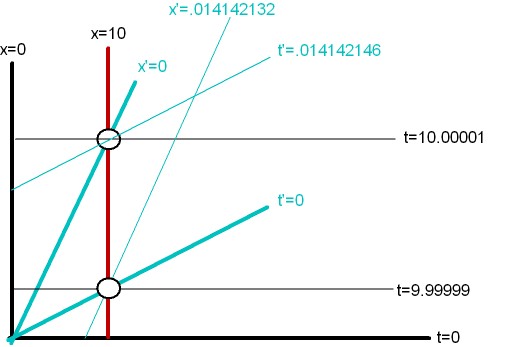 In the earth frame the clocks on the earth, star, and rocket all display "zero" at this time.

Please note that in the rocket's frame the simultaneity is not the same as in the Earth frame. Hence, from rocket's perspective, at the time when it passes the Earth, the time on the star's clock is not "zero", but something about (10 years - 5.16 days).

In other words, the two events (a) clocks on Earth set to zero, and (b) clocks on star set to zero - are not simultaneous in the rocket's frame.

Here's a spacetime diagram in the spirit of @WillO and @Sandejo for the case of $(v/c)=3/5$ and $L=3$, first using light-clock diamonds (so we can calculate by counting) and then using hyperbolic-trigonometry (which can be generalized to your case of $(v/c)=(1-10^{-6})$ and $L=10$). See the associated Desmos url. 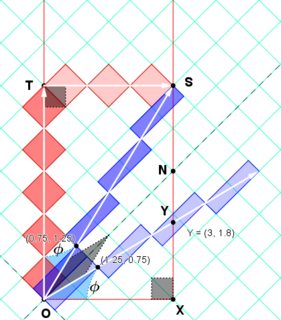 2
Implications of proper Lorentz transformations having determinant one

1
Doppler shift of radio signals to an accelerating observer
1
Is length contraction and time dilation symmetrical between non-accelerating reference frames?
8
Special relativity: sensing speed and time from a rocket
1
Confusion about twin paradox
5
In the twin paradox or twins paradox what do the clocks of the twin and the distant star he visits show when he's at the star?
1
In the twins paradox of relativity, is this an accurate non-mathematical description of what happens in the the traveling twin's frame of reference?