As you know if I want to find the force for an accelerated object I will use the law $F_o=ma$ so I can get the affecting force of it.

Now, how can I calculate the drag force (Air resistance force)?

OK, Actually I know the formula below:

While: $\rho$ is the air density, $\nu$ is the speed of the object relative to the air, $A$ is the cross sectional area of the object and $C_d$ is the drag coefficient.

$C_d$ is a function of speed via the Reynolds number. See here and here. 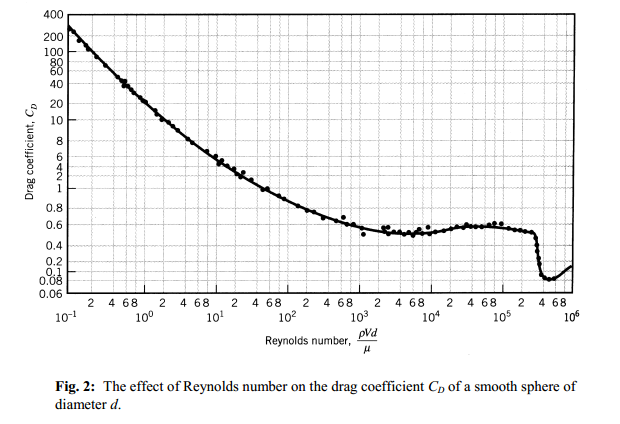 For some numeric values for the $C_d$ vs. $\rm Re$ use the following from here of which you take the log values to interpolate.

If the density $\rho _{ball} $ of the ball (or, equivalently, the name of the material from which it is made) is known, it is possible to find its volume $V $ via:

According to this Wikipedia article, the drag coefficient for a shpere is $0.47 $.

Not the answer you're looking for? Browse other questions tagged newtonian-mechanics forces projectile geometry drag or ask your own question.

1
Drag/air-resistance impulse
2
Finding power with Drag Force equation
1
How to calculate the actual drag force on a wing?
2
Calculating wind force and drag force on a falling object
0
Finding Air resistance of A Projectile Body (With an in depth explanation of the Math)
0
Why does Drag force equation contradicts the relationship between Reynolds number and drag coefficient?