Current Through a Circuit with an 8 Resistor Setup

The following is a question from a practice Physics GRE exam (found online at ETS's website).

The circuit shown in the figure consists of eight resistors, each with resistance R, and a battery with terminal voltage V and negligible internal resistance. What is the current flowing through the battery?

Here is the figure in question: 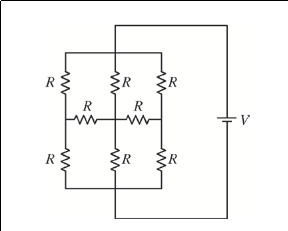 Since this is a GRE question I figured there was a shorter approach than a brute-force, Kirchoff's Voltage Law around every loop. I've been trying to figure out what a simpler solution would be by reducing parallel/series resistors, which currently there aren't any that can be reduced that way. Then I tried a triangle-star conversion, where I basically reduced each closed square in the diagram (each square was essentially a triangle because each had a resistor-less wire on one of the sides) but that also didn't lend itself to parallel/series reduction. I couldn't figure out another approach after that.

The correct answer is 3/2**V/R*, and an abbreviated solution I saw someone else put online (http://physicsworks.files.wordpress.com/2012/09/gr0877_solutions.pdf, problem 68, if you're interested) said to treat the problem as 3 separate 2 R resistors in parallel, but I am not sure how that works, because there are still the two horizontal resistors. Could someone explain to me either why this approach to the problem is correct or an alternative approach to the problem? Thank you!

The voltage across either horizontal resistor is zero so they can be removed from the circuit without changing the solution.

In other words, it doesn't matter if the horizontal resistors are there or not so they can be removed without changing the solution.

You are then left with 3 identical paths with resistance 2R each.

Of course, in a real circuit, the real resistors will never be identical so, this ideal solution is only an approximation.

Besides Alfred Centauri's elegant solution, there is a way to use the triangle-star transformation to solve the problem. This includes transforming the two stars, each comprised of the two outer vertical and a adjacent horizontal resistor, into a triangle. This is always helpful to know because the symmetry might not be present. 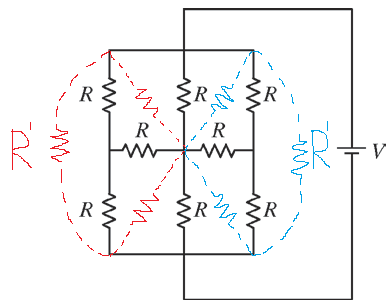 The resulting triangles are drawn in red and blue, and the triangle of resistors is obtained from the star it encloses. All the resulting resistors have the same value

After this it is straightforward to obtain the effective resistance

For all those who have trouble deciding which sides of the triangle (delta) to combine and have questions like these: How do you know (after having 2 triangles or "deltas", in this case, in place of your T-networks) how to collapse the triangles into the rest of the circuit so as to make it resemble an ordinary series and/or parallel circuit?

The key idea seems to be you must collapse right triangles first. Doing anything else seems to put oneself in trouble by miscalculating equivalent resistance.

So resistances of delta arms of triangles that replaced T-networks...those are all 3R. The remaining 2 resistors not converted into triangles are 1R.

As you redraw the geometry of your problem after simplifying triangles in about 4 steps, you should have many parallel equivalent calculations. And I only got 1 equivalent resistance calculation that was series. In the end, you must end up with Req = 6R/9. And I is easily calculated with V=IR.

Not the answer you're looking for? Browse other questions tagged homework-and-exercises electricity electric-circuits electrical-resistance or ask your own question.

1
How does symmetry allow a rapid determination of the current between $A$ and $B$?
-2
How to simplify these kind of circuits?