Will a two-photon state be detected at the same spot?

Let us say I excite a particular mode $\omega_l$ of the electromagnetic field by means of parametric downconversion such that both of them are identical in all aspects: polarisation, direction and of course, frequency. So, I have the state: $$|\psi\rangle = |2\rangle$$

Let this state impinge on a detector array whose active area is bigger than the photons’ spatial stretch. Within this region let the probability of detection be uniform (top hat profile). 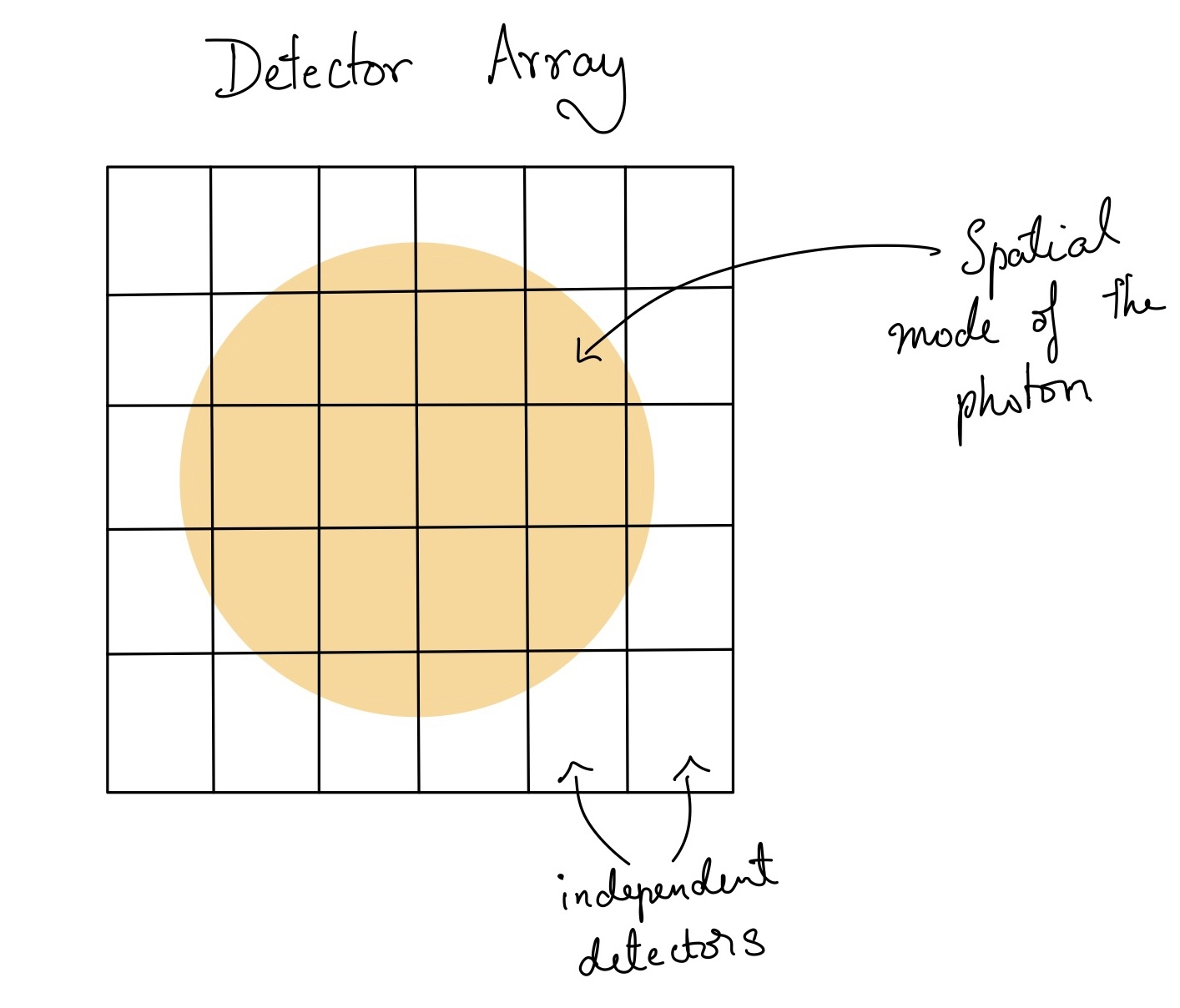 If the detectors are ideal (zero dark counts), can two independent detectors fire simultaneously? Or, given the identical nature of the photons will each instance always trigger the same detector in the array?

In other words, is the detection of a single photon within our state $|\psi\rangle$ an independent event?

From a purely theoretical perspective, you are considering a two-photon state of the form $|2\rangle\equiv\frac{1}{\sqrt2}(a^\dagger_\psi)^2|0\rangle$ where $a_\psi^\dagger=\sum_k c_k a_k^\dagger|0\rangle\equiv\sum_k c_k |k\rangle$ creates a single-photon state that is a superposition of a bunch of spatial mode (think of $\psi$ as the wavepacket of the photon).

Note that, on paper, there isn't really any fundamental difference between the scenario you consider, and a two-photon state delocalised on two (or more) separate spatial modes. You could generate with whatever method you like a two-photon state in a single mode, call it $|2_i\rangle$, and then pass it through a beamsplitter, and do coincidence measurements on the two output spatial modes. Mathematically, the scenario is identical to the one you consider (except that you can deal with easily distinguishable spatial modes, rather than pixels distinguishing positions on a single-photon spatial distribution).

In other words, on paper, sure, this is possible. I'm not aware of this having been directly observed experimentally though (I mean the scenario where you resolve pixels within a wavepacket). The thing is that single-photon detectors generally cannot resolve different spatial modes within a single-photon beam, and vice versa, pixel-resolving devices (such as CCD cameras) generally only detect intensities. The technology to do pixel-resolving single-photon detectors is relatively recent, and still under active development. See e.g. https://arxiv.org/abs/2007.16037 for some discussion of recent developments in this field. I'm also not really expert in this field, so take the above with a grain of salt.

Two photon that are produced as a pair due to the down conversion from a single pump photon would be entangled (correlated) in their transverse momentum. This is a property used in many application. What it means is that you can detect the two photons with different detector in coincidence. In other words, they can fire simultaneously due to the detection of the respective photons in the pair.

Not the answer you're looking for? Browse other questions tagged quantum-mechanics photons quantum-entanglement quantum-optics or ask your own question.

0
Photon detection rate for pure / mixed states coming from single mode point source
1
State vector after quantum eraser
4
Temporal delay between entangled photon pair
2
Is there a class of Bell inequalities that are violated by certain mixtures of known orthogonal entangled states?
1
How does interference occur in interferometers?
0
Error associated with bins in a histogram
0
Can two spin 0 particles be entangled?