When generating entangled photons by means of Spontaneous Parametric Down-Conversion SPDC, the usual assumption is that the two photons are created at the same time. I have not been able to find any papers which discuss this assumption, nor experimental papers in which the delay has been measured.

I'm looking for (A) papers which discuss the above, or (B) measure the above. What follows describes what we are doing in the lab.

Our setup is type I SPDC using a 90 mW CW diode laser operating at 402 nm, with two pieces of BBO with the optic axes at 90 degrees. We use high efficiency interference filters to remove light that is away from the degenerate wavelength, which is 804 nm.

In our experiment we are finding that the quantum efficiency (pair correlation) increases very rapidly as the temporal binning is increased from a few hundred picoseconds to a few nanoseconds, flattening out around 10 ns. The corresponding Poisson statistics for "accidental pairs" should grow linearly with the increase of temporal binning, and our experiments with non-entangled light are consistent with the Poisson statistic estimates.

Our timer-counter clocks at 81 ps per tick; 81 ps of time corresponds to a distance of (300 um/ps x 81 ps) = 24.3 mm, or about an inch. 10 ns corresponds to 3 meters, or about 10 feet. The single-photon detectors are symmetrically placed, and essentially have identical distances to the BBO crystal, about 1200 mm.

We are currently running some additional experiments, gathering data for a series of temporal bin durations so that we can plot the rate of increase with increased time.

quantum-mechanics photons quantum-entanglement
Share
Improve this question
asked May 17, 2017 at 2:48

The assumption that the photons are created at the same time is a good one: you're looking for the problem in the wrong place.

What you've observed is almost certainly due to technical details of the detectors you're using. There is a time interval between when a detector absorbs a photon and when you get the electrical signal indicating this happened (latency); more importantly, this time interval also has a variance (jitter). These values can be on the order of nanoseconds depending on the type of detectors you're using.

One more thing: assuming you do have a small enough jitter to resolve relative timing of events by better than 10ns (quite likely you do), did you try readjusting the relative delay between the signals from the two detectors after reducing the time bin sizes? Maybe the two detectors' time bins are "misaligned" by a few nanoseconds: at 10ns the bins are so large that this misalignment doesn't matter.

When generating entangled photons by means of Spontaneous Parametric Down-Conversion SPDC, the usual assumption is that the two photons are created at the same time. I have not been able to find any papers which discuss this assumption, nor experimental papers in which the delay has been measured.

I'm looking for (A) papers which discuss the above, or (B) measure the above. What follows describes what we are doing in the lab.

To talk of photons and entanglement one needs Feynman diagrams. Here is a diagram two entangled photons : 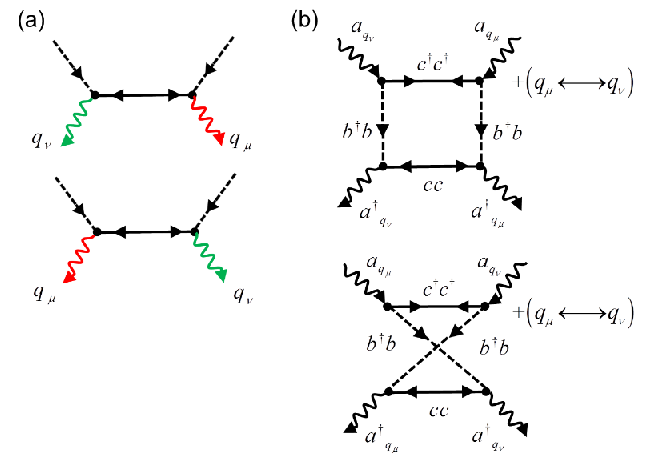 (b) Feynman diagrams of the density matrix calculations

Please note that in feynman diagrams of this type, time is in the y axis, but the x axis is mathematical, an iconal variable representing the mathematical formulation of the virtual particle exchanges, not a real space difference to be crossed and thus take time.

In general virtual displacements within the Feynman diagrams have no meaning in the laboratory. In this sense the two photons in the basic figure (a) have no time displacement and thus are coincident in their emergence, afaik, no time delay.

Searching for "Feynman diagrams for SPDC entangled photons" I discovered that the term "Feynman diagram" is expanded in this research domain, for example fig 5 here, and figure 2 here . If the method follows the Feynman diagram rules , the conclusion should be the same, there is no predictable spatial separation between the two emission vertices (that would take time to "cross",) and there vertices are on the same time axis..

Not the answer you're looking for? Browse other questions tagged quantum-mechanics photons quantum-entanglement or ask your own question.

3
Local measurement of entangled particle pairs and interpretation of state
8
Interference and which-path information
0
Double-double-slit with entangled photons
3
What does partial (non-maximum) quantum entanglement mean?
1
Question on the creation of an entangled photon pair in a specific realization of the EPR-Bohm Experiment
0
DCQE: is SPDC low rate fundamental?
3
Why Do We Ever Get Interference in a Quantum Eraser?