What is light cone? Explain to mathematicians who understand the Lorentz group but not light cone

Lorentz group $O(1,3)$ explains the symmetry group of the spacetime at any fixed point.

Built in on this data of Lorentz group $O(1,3)$, how do we explain what is light cone to mathematicians?

Namely what is light cone? mathematically? How to explain to mathematicians who understand $O(1,3)$, but not light cone?

What exactly is this cone of light cone defined mathematically?

Given a four-vector $A^\mu$, define the “interval” associated with $A$ as

The “light cone” is the surface formed by all light-like four-vectors. The interval $\Delta s_A$ is preserved by Lorentz transformations.

Light cones can more generally be defined for a curved spacetime: Consider a $4$-dimensional Lorentzian manifold, that is, a $4$-dimensional smooth manifold $\mathcal{M}$ together with a metric $g$ with signature $(+,-,-,-)$. Then we can define for each point $p\in\mathcal{M}$ the "light-cone" $V_{p}\subset T_{p}\mathcal{M}$ to be the set of all "time-like vectors'', where we call a tangent vector at $p$ "time-like", if 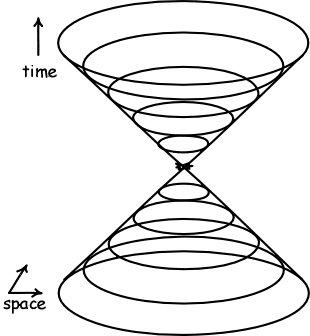 (image from Einstein for Everyone - Spacetime)

There are two related but different notions of "light cone" (or "null cone"): one in the spacetime [which Minkowski introduced in 1907/1908 as part of his "Space and Time", which introduced the "spacetime viewpoint" and the various terms we use today in relativity], and the other in the tangent space of a spacetime event.

Light Cone in the Tangent Space of an event in Spacetime

The Minkowski Metric on vectors in the tangent space divides the vectors into three types via the sign of the square-norm of the vector. In the (+---)-signature convention, we have timelike, null [or lightlike], and spacelike.... corresponding to positive, zero, or negative. It is said that the light cones encode the causal structure of the spacetime.

The light cone in the tangent space would be defined by the set of all of null vectors (the "lightlike directions"), which would be tangent vectors to geodesics in the spacetime traced out by light signals to or from an event. The tips of these vectors lie on a conical-shaped hypersurface. This cone can also be thought of as the asymptotic surface of the hyperboloids of (say) the future unit-timelike vectors [such a vector is called the 4-velocity, which is tangent to a timelike curve in spacetime that represents the worldline of a particle with nonzero mass]. The light cone therefore represents a finite limiting but unattainable speed for such particle worldlines.]

The light cone of event O is the set of events reached by lightlike geodesics from O into the past and into the future, which describes the spacetime evolution of a flash of light. (This was Minkowski's use in his "Space and Time" presentation in 1907/1908.)

In some cases, it will look like the typical light cone as we move away from O. However, in some situations the light cone can develop caustics.

The interior of the future light cone can essentially be thought of as the "chronological future" reachable by timelike geodesics from O, although there may be subtleties in tying down a more precise definition. (See "Techniques in Differential Topology in Relativity" (1972) by Roger Penrose https://doi.org/10.1137/1.9781611970609 )

Not the answer you're looking for? Browse other questions tagged special-relativity metric-tensor group-theory definition causality or ask your own question.

-2
Is the speed of light the limit or just everything moves at this speed?