Can a refrigerator produce a positive amount of net work output?

The Clausius statement of the second law is:

"Heat can never pass from a colder to a warmer body without some other change, connected therewith, occurring at the same time."

This is typically illustrated in a manner similar to the diagram labelled "(a)" below: 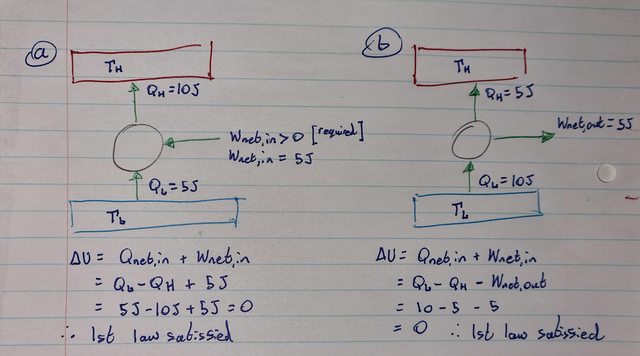 Now note that in the quoted Clausius’ statement above, he only states that "some other change" must occur at the same time as the heat flow from cold to hold. He does not say that the change necessarily has to be a positive net work on the device (i.e $W_{net,in}>0$). So in theory, if I am to take the above statement as truth, then surely it should be possible to construct a device (a refrigerator) as shown in the diagram above labelled "(b)"?

That is, a device which transfers heat from a colder body to a hotter body and does a positive net work on the surroundings during the cycle. This clearly seems wrong but it appears to me that it doesn't violate the second law (as it is stated above) and it doesn't violate the first law either since we still have that $\Delta U = 0$ for the cycle. Is this all correct? Is it possible to create a device operating on a cycle which transfers heat from a cold source to a hot source and at the same time does positive net work on its surroundings (i.e. $W_{net,out}>0$)? It seems somewhat intuitive to me that this shouldn't be possible. If it isn't possible, then shouldn't the Clausius statement be updated to say that "Heat can never pass from a colder to a warmer body without a positive net work input into the device causing the heat flow"?

That is, a device which transfers heat from a colder body to a hotter body and does a positive net work on the surroundings during the cycle.

Although this statement of the second law is rather imprecise, the device you describe (which I will call a refrigeration engine) is indeed forbidden by it.

We already know of functioning devices which can take work and convert it to thermal energy, which we can generically call heaters. So, with your refrigeration engine, you could couple it with a heater in the hot reservoir to further increase the heat in the hot reservoir. Then you would wind up with a combined system that violates Clausius’ statement.

If you assume Clausius' statement to be simply what you quoted you are in principle right: it does not explicitly forbid positive work in a refrigerator (which is forbidden by thermodynamics as we now know it). But that version of the statement is, let us say, unprecise or incomplete, and apparently Clausius himself was dissatisfied with it. The problem being that it lacks mathematical description: what is meant by "some other change"?

The point is, that it is not "any other change" that has to happen (which would include positive work, as you say). it is rather meant to be "it does not occurr spontaneously: something else must happen for the process to take place".

Unfortunately, I could not find Clausius' original version of the principle. German wikipedia states it in a slightly less misleading way, as "there is no change of state whose only result is the flow of heat from a cold to a warm source". In this version, it is clear that the point is not that "something else also has to happen for the process to take place" - which seems to indicate that as long as "anything else" happens, heat can flow in that direction - but rather that "you need to do something in order for the process to take place". That "something" that you need to do is work - as clearly stated by the successive formulations of the 2nd principle - for which Clausius himself played a fundamental role! And it is then found out that that something has to be work on your side, not any kind of work.

Not the answer you're looking for? Browse other questions tagged thermodynamics energy statistical-mechanics temperature or ask your own question.